Peter Mumford, who tackles staging, design, concept, lighting and production, emerges triumphant. The three huge screens behind the orchestra are
multi-function, translating the text, giving stage directions to help along the theatre of the imagination, and conjuring up a multitude of natural images,
often of a primordial slant as befits atemporal myth, from forest scenes to well-timed ravens. Opera North’s Ring is also an immersive experience, with a
plethora of satellite events. Particularly enjoyable amongst these for this final instalment was a talk on The top five things you need to know about
tonight’s instalment in the Clore Ballroom which at one point had the audience, sitting in a pretend forest, hollering out the braying horns of the
vassals.

Held in the current atmosphere of political uncertainty, aspects of Wagner’s Ring become naturally highlighted (particularly the back-stabbing, literal in
Siegfried’s case). Yet Wagner’s genius towers over and cuts through such local concerns, his over-reaching vision sucking us into this dark World
inexorably. Richard Farnes guides us through Wagner’s huge score expertly. His conducting style is precise, never over-emotive; the smallest gesture seems
to register on his players, and there is a true sense of flow to his conducting. While I enjoyed Das Rheingold (the only other of the four I was able to
catch), it was eclipsed by some way here. Farnes is not one to dawdle, yet the result is forward movement rather than rushed; the bright orchestral sound
for Siegfried’s Rhine Journey seemed exactly right, and while the final act Funeral March was fluent, it held great dramatic weight. Farnes encouraged the
best from his brass players, too, the great, trill-encrusted crescendo preceding Siegfried’s second act entrance a case in point. 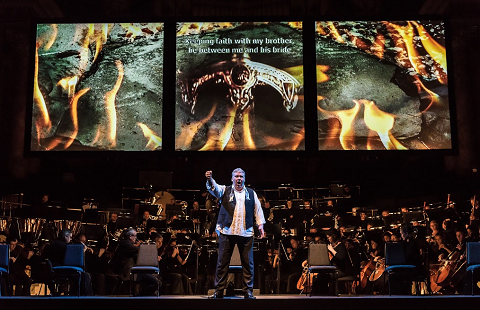 Interesting to see that First Norn was Yvonne Howard, who had so successfully taken the role of Fricka in the Rheingold. Actually, all three Norns were
cast from strength, their voices very different, three distinct characters weaving the rope of destiny, entering clad in black veils, re-veiling themselves
once the singing was over. The orchestra’s radiant Dawn led naturally to Siegfried and Br¸nnhilde’s massive duet. The Siegfried here was Mati Turi (Lars
Cleveman had taken the role for Siegfried itself), a singer with a strong low register, and a top that can stand its own against a Wagnerian orchestra. His
retelling of the story in the final act was his high-point. Yet his delivery did seem to be all at around the same dynamic level, with occasional forays
from the prevailing forte to a fortissimo. His Br¸nnhilde, Kelly Cae Hogan, was more than his equal, her “O heilige Gˆtter!” splendidly done, sailing
easily over the orchestra, her final high C of the Prologue truly spine-tingling. She was perfectly chosen: it is Br¸nnhilde who closes the entire cycle
(bar a couple of words from Hagen, of course) and Hogan was fully in her element and in her voice. Right from the off, her voice was fully open and free.
This was a major assumption of the role, culminating in a beautifully variegated “Immolation”. Her voice piercing through the orchestra like a crystal
point, she found real beauty in those final stages, the lower part of her voice as she seems to imitate Erda (“Alles Weiss ich”) wonderful; and just as
wonderful that she still had that openness of voice for “Fliegt Heim, ihr Raben”. Throughout this final twenty minutes or so, Hagen’s reactions as he
hovered at the side of the stage were cherishable. The music-drama ended, as is appropriate, with the orchestra bathed in golden light. 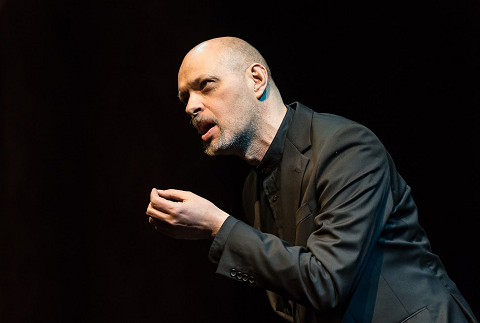 Interesting that the singer who was Gunther had taken the role of Donner on opening night, the latter a far smaller part. Here, Andrew Foster-Williams was
finally able to showcase his large voice; perhaps his Gutrune, Giselle Allen, was a little weak vocally initially. Another familiar face from Rheingold was
Jo Pohlheim’s Alberich, well characterised but perhaps not as black of timbre as one might hope for this role. Mats Almgren (Fafner on opening night) was a
terrific Hagen: his Watch (“Hier sitzt ich zur Wacht”) was dramatic, although again one has heard darker voices here. Almgren’s power was never in doubt,
though, and the Alberich/Hagen interactions in the second act carried great weight.

One of the finest assumptions of the afternoon/night was Heather Shipp’s Waltraute, her Narration (“Hˆre mit Sinn”) finding the bull’s eye of Wagnerian
concentration; later in the act, she actually sounded believably furious. One must not forget (how could anyone?) the Chorus of Opera North, powerful
beyond belief at times; and yet capable of infinite tenderness (“Heil dir Gunther”, in the second act). The Rhinemaidens, counterbalancing perhaps the
Norns, made a beautiful appearance in the final act.

And so the great cycle came to a conclusion, the enthusiastic standing ovation completely justified. A magnificent achievement.