Without knowing what’s on the programme. For
tonight’s edition with Berg and Gershwin, the queue outside went around
the building. A huge interest! Inside, folks were arguing over seats. A
disgruntled elderly couple planted themselves demonstratively on the reserved
press seats next to me. They did not budge—I wouldn’t have
either. That’s what you get when Barbara Hannigan performs!

The “Singing Conductor” shared her great musicianship with the
Mahler Chamber Orchestra (MCO) in an insightful, albeit slightly haphazard,
rehearsal for the concert the next day. The first part of that programme would
also include Debussy’s Syrinx, singing Sibelius
(Luonnotar), and a Haydn symphony. But tonight Hannigan performed the
second half of that programme with a bit of Alban Berg’s Lulu
Suite and most excitingly offered a sneak­peak of Bill
Elliott’s adaptation of Gershwin’s Crazy Girl,
specifically tailored for the Prima Donna. Elliott won a Tony for working on
the orchestration for Christopher Wheeldon’s An American in
Paris.

The rehearsal was a rehearsal, so I shouldn’t comment on the
music…but it was great! What was more interesting was the insights into
Hannigan’s collaborative spirit. She truly is rare jewel. The Lucerner
Saal, a smaller venue within the marvelous structure of the Kultur­ und
Kongresszentrum Luzern (KKL), made for an intimate experience that stimulated a
dialogue between Hannigan’s wit and the audience’s laughter.
Whispering kids full of curiosity added an additional giddy dimension. 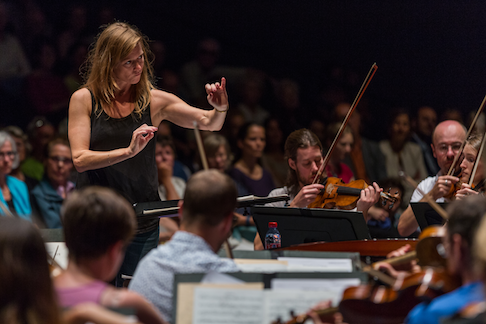 On bare feet and in jeans with a casual but focused air, the virtuosa opened
with a segment from Berg’s Lulu Suite. Having sung this role
often, she knows all the tone rows of Berg’s characters, thus prepared to
conduct this piece with dramatic perspective, but She did not sing. Instead she
demonstrated her conducting skills were not just a gimmick and revealed an
authentic talent. As extended extremities, her sinewy, muscular yoga arms
became her batons. She performed the part of the piece where Dr.
Schön’s in-love son Alwa meets Lulu right after she is released out
of prison. Highly dramatic and very engrossing. Berg’s feverish music fit
the humid summer heat arising from the lake.

Around the same time Berg was writing Lulu, Gershwin composed
Crazy Girl. Hannigan recounted how the American composer supposedly was too shy to perform his
music in front of the Austrian composer at a Vienna party. To which Berg
responded: “Music is music”. Bill Elliott’s orchestration of
Gershwin’s songs strangely resonated Berg’s atonality. I would have
never associated the two with each other, if I had not heard them in this
context: Gershwin like never before. It was a pity I could not stay next
evening’s official premiere of Elliott’s Berg-echoing orchestration
of “I’ve Got Rhythm”, “Embraceable You”, and
“But not for me”.

Hannigan has a slightly dansant conducting style­­, natural and in
tune with the music. Nothing overtly theatrical. With her fabulous voice and ­North-American
intonation she brought Gershwin’s character immediately to life. Her
sighs gave the songs authenticity. “Mister, listen to the the rhythm of
my heartbeat” she sang. How poetic as conductor!

During this rehearsal, Hannigan revealed her collaborative spirit. She
frequently requested feedback from the MCO’s musicians and strategically asked the
saxophonist for a crescendo so she could recognize her cue: “The problems
is, I cannot look at the my score then”. Her insistence on feedback
resulted in great synergy: “Can I just hear that one, but without
me?”.

The big reveal in Elliot’s orchestration was the sudden choral singing
of the Mahler Chamber Orchestra as back­-up to the Maestra. They really seemed to enjoy this
part. Certainly an unforgettable rehearsal.

I highly recommend the intimate setting of the 40 min. series. A terrific
place to bring small children.