Conductor Iv·n Fischer was having nothing to do with melancholy portentousness at this Prom with the Budapest Festival Orchestra, however, preceding the Mass’s dignity and
darkness with two of the composer’s more sunny compositions from the final year of his life, 1791.

It’s not often that a double-bass player takes centre stage at the Royal Albert Hall. But, Zsolt FejÈrv·ri – the Budapest Festival Orchestra’s principal
double bass player since 1994 – found himself in just such a spotlight, alongside bass Hanno M¸ller-Brachmann (replacing, at short notice, the indisposed
Neal Davies), before an expectant audience.

The concert aria ‘Per questa bella mano’ was probably composed for two members of Emanuel Schikaneder’s company at the Freihaus-Theater auf der Wieden in
Vienna: the composer and singer Franz Xaver Gerl – who would become Mozart’s first Sarastro – and the double bass player, Friedrich Pischelberger. The text
is a light-weight trifle – ‘By this beautiful hand, by these lovely eyes, I promise, my love, that I will never love another’ – but Mozart coats the
fripperies with melodic sweetness and orchestral freshness.

FejÈrv·ri exhibited a warm tone, investing the sound with vibrancy. His bowing was agile and fluent in the racing scales, while the challenging
double-stopped passages were well-tuned and rich – no mean feat given that the Viennese violone for which the concert aria was written was rather different
from the modern double bass, and the tuning pattern adopted by eighteenth-century virtuosi such as Pischelberger (so-called Viennese tuning, F1
-A1-D-F#-A) makes both the arpeggios built on the original natural harmonic series and the extended double stopping challenging on a modern
instrument. FejÈrv·ri inserted an idiomatic cadenza and engaged cheerily with the vocal line, as if raising a wry eyebrow at the singer’s more indulgent
sentimentalities. 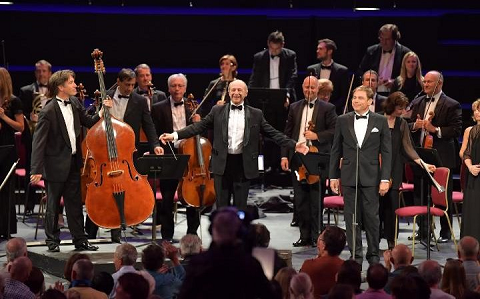 M¸ller-Brachmann (who has performed this concert aria recently with the BFO) had trouble settling the pitch in the opening phrases of the introductoryAndante, but later revealed a sonorous low register, if not always a full weight, and a well-rounded tone. The exuberance he brought to the Allegro revealed why his Papageno has won acclaim, and in the imperious vocal rises he demonstrated a strong, centred baritonal top. The Budapest
Festival Orchestra, which Fischer co-founded in 1983 with his fellow Hungarian conductor Zolt·n Kocsis, accompanied with precision and delicacy, the flute
‘duetting’ elegantly at times with the solo double bass. Fischer established a lovely lilt in the Andante, and expressive string vibrato and
phrasing was complemented by lucid woodwind and honeyed horns.

The BFO were joined by clarinettist ¡kos ¡cs, the orchestra’s principal clarinet since 1999, for Mozart’s Clarinet Concerto in A, which ¡cs performed on
the longer, more mellow-toned basset clarinet – the instrument for which Mozart composed the concerto. The orchestral playing remained fresh and
transparent of texture, and ¡cs’s unassuming melodiousness, supple phrasing and rhythmic buoyancy were refreshing. The sound was clean and airy, the
phrasing full of grace, and ¡cs employed a variety of articulations, nicely contrasting flowing slurs with tripping, articulated runs. But, somehow the
concerto didn’t quite sparkle. The opening of the second movement Adagio was phrased sensitively by all, but the tempo felt needlessly hurried and
¡cs didn’t make enough of the dynamic contrasts or fully exploit the expressive weight of the instrument’s lower register. The Rondo, Allegro
began at a lick but lost momentum, and the later restatements of the theme thus didn’t invoke the joyous ebullience that they can and should. For that we had to wait for the klezmer-style encore, ‘Sholem-Alekhem, Rov Feidman’ (Peace be upon you, Rabbi Feidman), by the Hungarian clarinettist Bela Kovacs – which ¡cs,
with the complicity of the BFO, seemed to begin in the wings and which induced faux surprise and disdain from Fischer.

In a recent interview-article in The Guardian (interview) Fischer made
it clear that what he wants above all in his music-making with the BFO is to avoid a sense of routine: “We work with intensity and in a very personal way.
It is more like the way a string quartet works. I don’t say to the principal cellist: ‘Please a little softer.’ I would say: ‘Come on Peter, what the hell
are you doing?’ It’s a different communication, much more personal. I immediately notice when their level of focus or concentration is not what it should
be. I work much more like a theatre director would work with actors.”

There was nothing at all ‘routine’ about Fischer’s reading of the Requiem: tempos, stage placements and the overall expressive sentiment were all highly
individual, verging on the eccentric. Fischer’s reading was not without interest but many of his choices eventuated inherent problems that were not
entirely overcome in performance.

The first note of surprise was instigated by the spatial arrangement of the musicians and singers. The 24 singers of the Collegium Vocale Gent were
dispersed among the BFO players, seated at orchestral desks as if members of an instrumental section; the woodwind formed an inner circle in front of
the strings, while the brass were ranged in an arc behind. Given the fairly small forces, Fischer would seem to be aiming for a seamless fusion of vocal
and instrumental sound – a worthy ambition, but one which hit a few problems.

I’d be surprised if the singers could actually hear each other: each member of the Collegium Vocale Gent was essentially a soloist, or part of duo, and
though the individual lines of the choral numbers were sung with beautiful tone and crisp rhythms, at times ensemble and balance were awry. It may have
depended upon where one was seated in the RAH – and perhaps the effect on live radio (BBC iPlayer),
aided by well-placed BBC microphones, was more effective – but for this listener the two tenors at the rear and the two sopranos at front-left were
acoustically privileged. At times, the dispersion of the sound was exciting and embracing. But, some of the contrapuntal writing, especially in the opening
movements, was messy, and the majestic power, and terror, of the full choral pronouncements in the Dies Irae and the Confutatis (pity the
fiddles whose right arms must have almost flown out of their sockets so precipitous was Fischer’s tempo – hysterical rather than horrified – in the former)
felt diluted.

The BFO principal violinist had a trying task leading an orchestra many of whose members must have had difficulty in seeing her (and perhaps in gaining
a clear sight-line of Fischer himself, when the desks of singers stood for the choral numbers). Ensemble both within and between sections was poor in
places, even though the orchestra was chamber-sized, and the intense focus that might be summoned from smaller forces was absent. This was a pity because
it was clear that each phrase was shaped with extreme care by Fischer and that the players understood his intent: the fragmented stage-positioning meant
that it was challenging for them to produce the desired effect as a synchronised ensemble.

Fischer did conjure some theatricality, without melodrama, whizzing through the movements, which often succeeded each other segue; indeed, Fischer
seemed to be driving through an ‘operatic’ scenario so fast that I began to wonder if the BFO were booked on a 10.30pm flight back to Hungary. Road traffic
signs warn that ‘Speed kills’: and this is a caution worth heeding. The score’s dramatic gestures did not have time to tell, dotted rhythms seemed bouncy
rather tremorous with tension. I winced when we were cheated of the tender beauty of the Recordare: the initial dialogue between the cellos and
clarinet was as impetuous as a 100-meters Olympic final and the singers had neither melodic breadth nor spaciousness of breath to shape the glorious
layering of the vocal lines – regrettable given the apparent, though fleeting, unified blending of the quartet of solo voices.

The pervasive sobriety of the Tuba miriam was also denied us but trombonist Bal·zs Szakszon admirably coped with the technical challenges of
performing one of the repertoire’s most well-known orchestral solos at the urgent tempo chosen by Fischer. Similarly, the soul-worrying cries, ‘Rex’, at
the start of the Rex tremendae majestatis (O King of awful majesty) did not have time to register the terror that the text implies.

Then, having created seemingly unstoppable, even accelerating, momentum, Fischer slammed on the brakes before both the Offertorum and the Sanctus: the long silences implied that the Proms’ audience – perennially the most attentive and focused of listeners – was comprised of naughty
children of whom absolute silence and stillness were demanded before the performance would recommence.

Fischer did find some sad delicacy in the Lacrimosa which pleasingly did not drip with sentiment: the string sighs were expressive rather than
effusive, and were complemented by lovely pianissimos from the Collegium Vocale Gent, with the woodwind solos allowed to speak tellingly.

The four soloists – seated to rear, and in the midst, of the orchestra – gave performances of varying impact. Soprano Lucy Crowe tended to dominate the
ensembles, but this was not her fault, her voice simply soared with wonderful clarity: her solo statements had a lofting intensity and richness which was
utterly heart-winning. When I saw Barbara Kozelj sing with the Academy of Ancient Music at the Barbican Hall last October, in Monteverdi’s Il ritorno d’Ulisse in patria (review), I commented that the
mezzo-soprano’s Penelope was a ‘still oasis of stoical forbearance’; and Kozelj didn’t seem any more inclined to join in the breakneck haste here. She
shaped her solo and ensemble contributions with chastening elegance and restraint, and her tone had a soulful focus which Fischer was not disposed to
indulge.

M¸ller-Brachmann was again resonant but the intonation problems which tempered his earlier aria reappeared at the start of the Tuba miriam; tenor
Jeremy Ovenden was at home with the prevalent theatrical urgency but his tone was occasionally protrusive in the ensembles.

I’m not averse to innovation and a fresh look at familiar musical friends. But, there are some works of art that don’t need to be tinkered with, especially
if nothing new is revealed.