It is a luxury to see such an exhilarating new staging of this worthy opera,
which seems to be finding its way back into favor after some years of
unjustified neglect. Mr. Barber writes wonderfully for the voice, and here he
crafts a treasure trove of haunting melodies that fall easily on the ear.

Conductor Leonard Slatkin seemed to revel in every bit of nuance in this
splendid Neo-Romantic score, from the entrancing harmonies to the soaring
melodies to the crackling through-composed dialogue that erupted into pungent
arias. The eloquent orchestra responded with a generous outpouring of musical
excellence underpinned by dramatic intent. Maestro Slatkin partnered his
exceptional cast with unerring unity of purpose, and constantly shifting
emotions were accommodated with consummate artistry, nowhere more so than in
that shattering final quintet.

That cherishable artist Erin Wall shows once again that she ‘has it
all’ as evidenced by her comprehensive, richly detailed, impeccable
performance as Vanessa. Ms. Wall regales us with a creamy, warm, vibrant tone
that is evenly produced in all registers and volumes. She is totally believable
in her early reserve, which gives way, nay “explodes” into a
pungent, tormented, mesmerizing characterization. Elegant to look at, ravishing
to hear, impossible to look away from, Ms. Wall is a true star presence.

As her inexplicably devoted niece Erika, young Virginie Verrez impresses
with a marvelous, refined mezzo that has individuality and polish. Her sound is
voluminous, appealing, and displays a fine, even presence, especially in the
score’s most famous melody, Must the Winter Come So Soon.
Moreover she is slender and lithe, and moves well on stage. As accomplished her
refined vocalizing is, I must say I missed Erika’s soul. Anguished cries
that should suggest aching spiritual pain, were instead technically secure and
intellectually apt. Erika should steal our hearts and run off with the show. I
feel certain the gifted Ms. Verrez could come to do this as she discovers the
part’s beating heart. 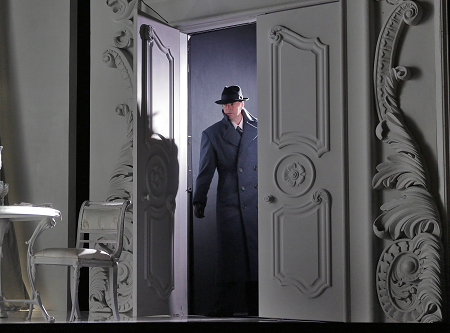 Rising tenor Zach Borichevsky has abundant appeal as the feckless Anatol.
There is a devious sweetness about him that perfectly informs the opportunistic
young man. That he also finds a crumb of honest feeling to throw to Erika makes
him, if not honorable, at least two-dimensional. His singing has many moments
of real beauty, and he is very persuasive encompassing honeyed sustained
phrases. The exposed expansive upper stretches are more challenging and
sometimes lie ‘just’ shy of the pitch, although Mr. Borichevsky
serves them well enough with a subtly manufactured squillo that does the job
without doing any harm. This role was written for Gedda after all, asking for a
combination of suave insinuation and spinto power. Mr. Borichevsky is
already making a good case for the part. Now it will be a pleasure to watch him
grow.

It was a treat to see the much admired Helene Schneiderman whose inscrutable
mezzo and seasoned dramatic presence made the most of every moment as the
irascible Old Baroness. In her self-imposed silence, she even managed to
suggest a begrudging (bemused?) attachment to Vanessa and Erika. 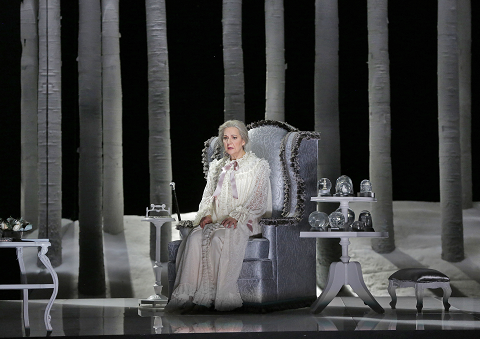 It was worth the price of admission just to see venerable bass-baritone
James Morris in a star turn as the dotty Doctor. Mr. Morris is not only a
valued asset in this production but also to the recent history of opera
performance in general. What a generous, imaginative, gifted, engaging
performer he is. It would be foolish to pretend that he is the fresh-voiced
basso cantante of yore, or the potent Wagnerian of
‘mid-yore,’ and he doesn’t try to. Happily, he still has the
all the charisma and assured technique to craft an unforgettable impression
that is the talk of the festival. One of the week’s best moments was his:
after he tenaciously clung and clung and clung to a loud extended high note,
the delighted audience burst into spontaneous applause! Keep at it, Jim!

Allen Moyer’ handsome, white, film noir set designs (no that is not a
contradiction) proved the perfect environment to underscore the aloof, wintery
milieu. The imposing white drawing room features a curtained wall up center,
which breaks away as it recedes upstage, curtain now drawn to reveal a huge
cracked mirror, just as the false Anatol arrives. This powerful imagery at once
underscored Vanessa’s fear of aging and the depleting properties of the
passage of time, all the while reflecting (sorry!) her shattered dreams and
illusions.

The openness of the dining table stage left (the congenial face of the
family in public), is ingeniously offset by the cramped, skewed placement of
two easy chairs far down right (the uneasy reality of the family in private).
Indeed, at curtain rise Vanessa is in profile, her back somewhat to us, facing
a stoic Old Baroness, both of them deliberately puffing on cigarettes.

The addition of a grand expressionistic staircase and chandelier up center
dominated the visual as the space widened, just the characters’ life
views opened up decisively. Erika’s march down those stairs to her
attempted suicide was a potent effect. Erika’s bedroom was simply set
down left when needed, with all of the subtle movement of set pieces neatly
accomplished by costumed servants.

Spatial relationships were somewhat fluid, sometimes alienating, and most
always effectively suggested. One puzzle: Once the large double doors were
established as the main entrance with Anatol’s arrival, they were never
so used again. Church- and partygoers exited up left, Erika ran out to escape
her plight down right, Anatol entered carrying the lifeless girl from down
left. Not good. Not bad. Just “curious.”

Finally, the presence of a tiered end table bearing snow globes from
destinations that these reclusive inhabitants dream of visiting, was nothing
short of a brilliant metaphor.

Costumer James Schuette has devised a doozy of a collection: elegant, posh,
formalwear in a wide palette of neutral colors for many of the show’s
official events: hosted dinners, engagement parties, church going, and leave
taking. He has varied the look with attractive casual attire for day trips,
skating parties and the like. Most important, Vanessa looked like the fashion
plate she should be. 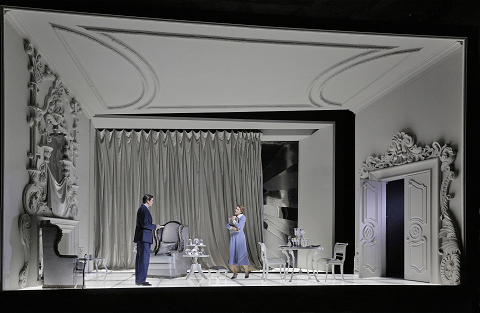 Christopher Akerlind contributed his usual top drawer lighting design. There
was excellent use of stark white, shadowy cross lighting, and brooding washes.
Since the set was white it took to subtle changes beautifully, and Mr. Schuette
employed well-judged hints of color.

I happen to have been seated next to an Ibsen scholar, and what an apt
parallel he drew to that style. Of course! The reserved formality of the
period, the churning internalized dramatics of the drawing room, the talking
past each other rather than to each other, it is all there, and director James
Robinson craftily knit these elements into a most satisfying presentation.

Mr. Robinson drew detailed, multi-layered performances from his cast, and he
showed an unerring eye for meaningful stage pictures. He kept many pieces of
inventive stage business in play simultaneously while always skillfully keeping
our focus on the main action. He and his team also crafted a unified plan to
build the arc of the drama and then bring it full circle.

After Vanessa and Anatol leave for a brighter future, Erika packs up the
snow globes and sends them after the couple. The set withdraws back to its
original look. The mirrors are again covered. Erika sits in Vanessa’s
easy chair facing a mute Baroness. They smoke as they face off. At the ending,
we are back to a new beginning.

With Santa Fe’s illuminating production of Vanessa, we were
privileged to participate in a cathartic journey, a perfectly realized evening
of lyric theatre in which nothing, and everything, has changed.