Considering these hazards, Seattle Opera’s Le comte Ory
should be considered successful. The piece contains some of Rossini’s
freshest inventions, with the delirious final trio standing among his
finest achievements. But the piece has suffered from from the beginning
from its piecemeal and slapdash dramaturgy, and it has not aged well.

Only the farcical context of the story line rendered its “sexual
politics” tolerable in 1828, and today its total reliance on the idea
that seduction of the innocent is not just tolerable but uproariously funny
means that even the most delicately contrived staging is going to exude the
lingering odor of long-used locker rooms.

The staging, a first for Seattle by the Australian director-designer
team of Lindy Hume and Dan Potra, does nothing to dispel the smell of stale
sweat. The Seattle Opera publicity department’s attempt to fun-up the
show by billing it as The Wicked Adventures of Count Ory signifies
a broad-brush approach, confirmed in a program interview, where Ms.
Hume’s hears in Rossini’s music not only “that he loved
good food, good wine, a good time,” but even that “he was
flawed, clever—and naughty.” Her dramaturgical touchstones
include Monty Python’s Biblical send-up The Life of Brian
and something described only as “60s flower-power.” (In the
event the latter influence was noticeable only by an outburst of what may
have been intended to suggest air-guitar and in the Count’s
leopard-print boots. 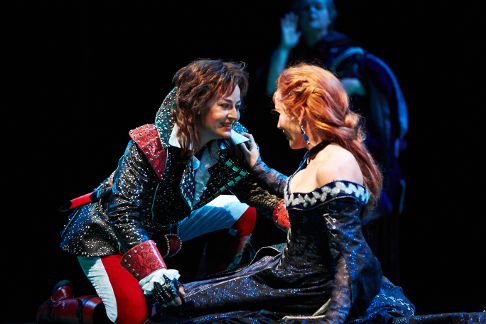 Mr Potra seems also to have been inspired by Monty Python—in this
case by the bulgy colorful animations of Pythonite Terry Gilliam. But what
amuses when it moves may lose its charm when it just sits there for an
hour. The setting for the first act, which resembles a department-store
show window upholstered in lumps and billows of emerald-green shag
carpeting, is so vast and vacant that the cast and chorus resemble garden
gnomes set about to enliven a miniature golf course.

Even powerful voices struggle for effect in this void. The second act
setting goes to the opposite extreme, buttoning up the action in a
three-story tin roofed lighthouse (or possibly a water-tower converted into
a summer retreat). The compression somewhat helps with the acoustics but
paralyses the performers, who are forced to spend much of their time
hurrying up and down stairs. The great trio is crammed into an attic space
that hardly allows the singers to move, let alone mime love-making.

Ms. Hume seems to believe in the stand-and-deliver approach for singers.
I cannot remember any touch of insight into character or situation. In such
a bald presentation, the musico-dramatic flaws of the piece stand out
clearly. Why does the Tutor have that tiresome song in act one? Because the
bass has to have an aria, of course. Likewise the drinking scene in Act II:
without it the baritone would have nothing to do. With their total
irrelevance to the action, the numbers let the energy leak out of the
evening without providing any compensatory musical or comic payoff. 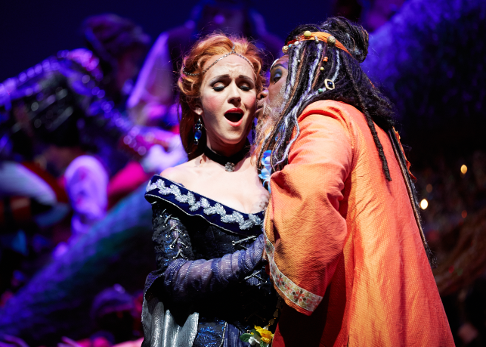 Abandoned to their own devices and muffled by the staging, the
principals are to be commended for what they manage to put across. Worst
off was Lawrence Brownlee as the count: dressed in an orange harem number
in Act I (before being revealed as Michael Jackson-in-Boots), he seemed in
poor voice: his high tenor was secure but rough-sounding throughout his
range. The Isolier, Hanna Hipp, came off very well vocally but her acting
was the generic operatic page-boy en travesti.

The only real winner was soprano Sarah Coburn, whom I suspect is on the
verge of a major career in the Zerbinetta/Konstanze fach. Her
warm, brilliant sound punched through the auditory scrim while her brisk
behavior and sharp timing created a distinct impression of a woman devoid
of airs and nonsense.

The orchestra gave firm support under the direction of Seattle debutant
Giocomo Sagripanti, who appears to be a thorough master of Rossinian color
and pacing. But musicianship alone can’t pull off a staging—and
indeed an opera—with so many inherent obstacles to success.