Unlike Le nozze di Figaro (2014) and Don Giovanni (2015) both staged by Mr. Bechtolf in the Haus f¸r Mozart theater (both to be revived later in the month) Cosi is staged in the Felsenreitschule — the old riding school with galleries carved into Salzburg’s famous city center rock.
Thus director Bechtolf’s staging is site specific, utilizing the 50 or so meter wide (165 feet or more), three tiered carved into the stone galleries as a living backdrop (singers and supers move amongst the tiers) the equally wide stage platform as a field for a sort of improvised street theater style staging. During the overture a number of black cloaked, masked sort of ninjas use chloroform saturated handkerchiefs to lay out Fiordilig and Dorabella (left supine on the stage) and Despina (carted off on a wheelbarrow). 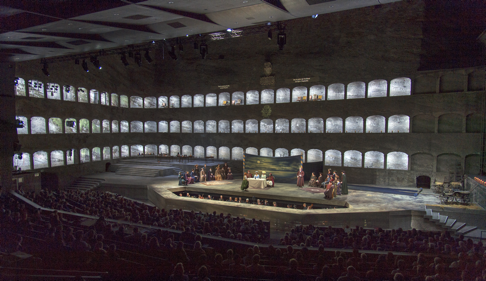 The Felsenreitschule galleries and Cosi stage platform
The knocked out sisters are draped onto a sofa (that needless to say will seat four at strategic moments), Don Alfonso, Ferrando and Guglielmo make their wager, The ninjas retreat to some sort of library way over on stage right. And the geometry (symmetries of four or six points) begins, and so far so good.
A pit has been cut into the stage platform in which the Mozarteum Orchester Salzburg was seated that provided polished (what else) accompaniment for the next four hours, its winds in pure sounds that evoked an orchestral utopia from another time within the splendid acoustic of this architectural artifact.
The conductor for the Cosi in this cycle is Ottavio Dantone (Dan Ettinger conducts Le nozze, Alain Altinoglu conducts the Giovanni). Mo. Dantone, a gifted Italian early music specialist, provided measured tempos throughout the evening allowing the Da Ponte text to be deliberately stated, tempos that were musical rather than dramatic. It was a lyric evening indeed with nothing musically extraordinary expected of the artists beyond fine singing.
The sisters Fiordiligi and Dorabella, sung by German soprano Julia Kleiter and American mezzo soprano Angela Brower respectively, were identically costumed in period style (only a slight variation of pastel hue) and vocally and musically perfectly matched in their pure rather than rich tones. Fernando, Swiss tenor Mauro Peter (a noted lieder singer) who with Guglielmo, Italian bass baritone Alessio Arduini, did their best to execute the fairly tame antics imposed on the young soldiers by director Bechtoff. Interestingly both Don Alfonso, sung by German bass-baritone Michael Volle and Despina, sung by Swiss soprano Martina Jankov· were aggressively presented, irritants to the protagonists rather than the amused instigators of Da Ponte’s dirty trick. 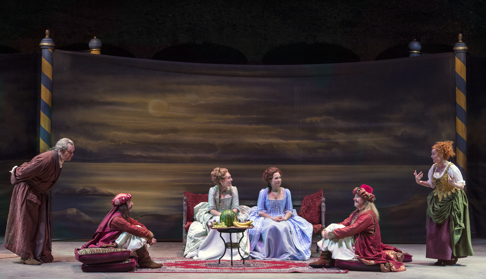 Left to right: Don Alfonso, Guglielmo, Dorabella, Fiordiligi, Ferrando, Despina
Director Bechtolf’s humor is low key in simple, momentary situational comedic skits that precluded a larger dramatic focus. Notably “Come scoglio” — Fiordiligi holds the entire cast at sword point for the duration of the aria, some traversing the runway that created a fore-stage in front of the pit (and therefore illustrating a theatrical chic fourth wall). On the other hand the trio “Soave sia il vento” was sung entirely presentational, the three singers seated unmoving on the sofa.
Musically the high point of the evening was the quartet of leave taking, the sisters bidding farewell to their soldier lovers. It was delivered with the musical precision and mannered shaping of exquisite string quartet playing.
Our expectations for an exceptional evening were high indeed.
The evening did not sustain this level of studied musical and theatrical interest. In the best of times the second act of Cosi challenges the stamina of is audience. Here the alternation of comedic moments with presentational scenes of serious feeling lost momentum. The emotional scope of the singers proved limited, and the directorial attempt to create interest by referencing the geographical extremes of the stage platform and by populating the back wall galleries succeeded only in pulling focus from the tense Fiordiligi Ferrando situation center stage.
Finally this difficult dramaturgical problem was more or less dismissed both musically and theatrically. At the end the four protagonists dashed individually to the four separate corners of the platform, the tyranny of all this theatrical geometry destroyed. Or something.
Michael Milenski