The opera is the film recast for Salzburg, Covent Garden and the Met by AdËs and British stage director Tom Cairns. For BuÒuel the film was gentle if macabre, humorous if macabre condemnation of Spain’s Fascist bourgeoisie.

Re-worked in Salzburg the exterminating angel (an invisible presence) presides at a dinner party after an opera where its conductor’s wife amuses with a (brief) piano recital and its diva is begged to sing a song by AdËs. By mutual consent and compulsion no one can leave the party — for days, then weeks. Feelings fray, living conditions deteriorate. Finally the guests agree the only possible exit is to sacrifice the host. The diva has the revelation that they all now are exactly where they initially were. They leave. 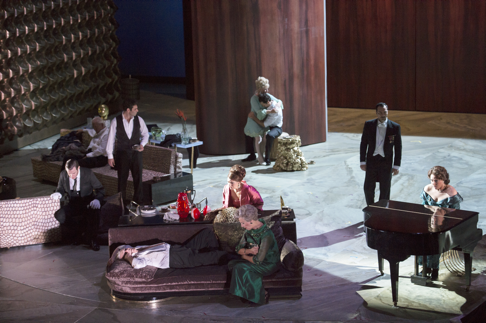 AdËs opera is bourgeois, hook, line and sinker. Rich, beautiful music requiring everything money can buy, i.e. triple winds, huge percussion battery. Difficult music requiring extended rehearsals for orchestra and for twenty-two solo voices plus chorus and dancers. It is an undertaking only possible at institutions lavishly supported by the haute bourgeoisie. The three mentioned above are possibly the only such in existence. The ironies are blatant.

AdËs inspiration is obviously complex, and finally he surely is teasing himself. And delighting in composing music that has the depth and breadth to encompass a quarrel about the size of spoon needed to stir coffee and the lengthy death of an elderly guest and then an intense love death, not to mention slaughtering a couple of lambs to avoid starvation, the cuisson of which is a lengthy discussion. The piano becomes more and more distressed, a cello is smashed, incest revealed. 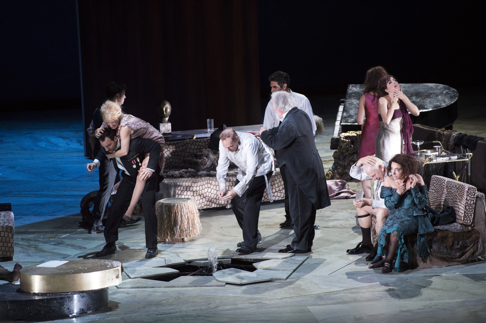 It is rich, beautiful music that can say anything, the sublime merged with the twisted, the simple with the complex. Music of Wagnerian scope and Brittenesque precision, of BuÒuelian cruelty and Aristophanesque satire. It is pure Thomas AdËs.

The staging conceived by director Tom Cairns was adequate but not complimentary to the score, the bows (no solo bows) were excessively choreographed.