And, where better to perform these exuberant burlesques than Wilton’s Music Hall – the earliest surviving Grand Music Hall, set in the historic East End of
London.

Founded by Clarke in 1994, Opera della Luna has garnered well-deserved praise for its zany, zippy productions of operatta, comic opera and pantomime. Its
touring productions might notionally be ‘small-scale’ – performed by a troupe of actor-singers, without chorus, and accompanied by a small orchestral
ensemble – but there’s nothing ‘miniature’ about their ambition or their theatrical impact.

Charmed as we are by Offenbach’s full-scale operatic gems – such Les Contes d’Hoffmann, OrphÈe aux enfers and La vie parisienne – we often forget that he was the composer of some 90 operettas, more than 50 of which comprise just a single act. Sometimes
employing a full cast and chorus, elsewhere just two singers, they ranged from brief curtain-raisers to hour-long works, and reveal Offenbach’s delight in
farce, fantasy, cloak-and-dagger melodrama and the exotic.

Having striven in vain to get his work performed at the OpÈra-Comique and other lyric theatres in Paris, in 1855 at the age of 35, Offenbach obtained a
license to open a small wooden theatre in the Champs Elysees – the ThÈ‚tre des Bouffes-Parisiens – for the performance of one-act pieces typically
comprising a brief orchestral prelude followed by half-dozen or so solos and duets.

Railing against the dull pretentiousness of the operatic fare on offer at the OpÈra-Comique, Offenbach promoted the tiny new theatre which had lain empty
between two trees on the Champs-…lysÈes, declaring: ‘In an opera which lasts only three quarters of an hour, in which only four characters are allowed and
an orchestra of at most thirty persons is employed, one must have ideas and tunes that are as genuine as hard cash.’ The same might be said of a modern-day
independent opera company – particularly in the absence of much ‘hard cash’ in the form of government support for artistic innovation and accomplishment.

Fortunately, Clarke is a cornucopia of ideas and theatrical masterstrokes. These two productions overflow with a glut of side-splitting gimmicks and gags.
The guffaws came thick and fast from the first, and did not stop. Clarke appreciates the affection with which Offenbach lays bare human eccentricities,
delusions and shortcomings. And, with a knowing nudge-wink which steers just the right side of vulgarity and excess, the director shows that he is
genuinely fond of these preposterous characters while at the same time nailing their bizarre flaws and foibles.

Croquefer
lampoons the violent immorality of the Crusades and sends up the arrogant affectations of medieval knighthood. Croquefer, ‘an immodest and faithless
knight’, has imprisoned Peasblossom, the daughter of his arch-enemy, Rattlebone. Their enmity has lasted for 23 years, financially ruining Croquefer and
depriving Rattlebone of arm, leg and tongue. Yet the latter remains a formidable, fear-inducing opponent, and Croquefer swallows his last weapon,
his beloved sword of Toledo, willing to accept an inglorious peace.

He orders his nephew, Headstrong, to guard their hostage. From her cell, Peasblossom recognises her guard as her beloved, and in their ensuing
love-duet they dream of running off together to Paris, imagining the delights they will enjoy at the OpÈra. When Rattlebone arrives, Croquefer gives him a
choice: either he must permit Peasblossom to become Croquefer’s wife, or she will be killed. To evade this fate, Peasblossom and her amour poison the wine
and plot to murder the two adversaries, who are preparing to do battle. As the duel commences, the spiked drinks take effect and the sword-play is
interrupted for a swift dash to the thrones-turned-commodes. The violent purgation returns both Croquefer’s sword and Rattlebone’s tongue to their owners.
Differences are settled, Croquefer begs the audience’s indulgence – and the composer and librettist of the piece (or in this case, conductor Toby Purser)
are dragged off to the asylum!

The exposed bricks of Wilton’s, shrouded in wafting smoke, were a fitting back-drop for Croquefer’s dilapidated black tower which thrust up into a
storm-cloud strewn sky. Elroy Ashmore’s economical set designs had a Gothic edge – the arms of Croquefer’s throne curling out like grotesque hands – which
was complemented by Nic Holdridge’s bold lighting design.

Attired in leather breeches and sporting straggly black locks, Carl Sanderson made an immediate impression as the eponymous villain – self-important,
blustering and snarling, and equipt with a powerful tenor with which to lament the disintegration of his once-modish castle. He was aided with apt
ineptitude by Caroline Kennedy’s goofy Fireball – a cross-between the Artful Dodger and a circus clown. Eager to please, Kennedy shone with feverish
excitement as she peered through her telescope at the advancing Rattlebone, or lined up model Crusaders to imitate the beleaguered Croquefer’s diminished
army. The role of Fireball was originally composed for tenor, but Kennedy’s bright, sweet-toned soprano added freshness and air to the macho mix,
especially in the spirited Trio in which Headstrong’s eagerness for combat encourages Croquefer to renew his struggle against his foe.

Offenbach and his librettists cocked-a-snook at the Parisian authorities, evading the regulation forbidding more than four characters to appear on stage at
the ThÈ‚tre des Bouffes-Parisiens, by making their fifth character a mute who has sacrificed his tongue in his battles with the Saracens, and whose
contribution to the final quintet is limited to grunts and howls. One-armed and one-legged, Paul Featherstone staggered valiantly and lop-sidedly on
crutches, worn down by his over-size helmet and basket of placards as he sought to rescue his captive daughter. He and Sanderson had plenty of fun during
the pantomime-joust and sword-fights (choreography, Jenny Arnold), their perfectly timed faux-amateurism paradoxically highly polished and professional.

Known as the ‘Mozart of the Champs-…lysÈes’ and the ‘Napoleon of the operetta’ – and living in Paris under Napoleon III, a time when few in society, from
high to low, were really what they claimed to be – in some ways Offenbach’s whole life was a mask-wearing charade, and it’s no surprise that so many of his
characters do nothing but pretend to be what they are not. Offenbach’s The Isle of Tulipatan takes this role-playing to a new level of Wildean
absurdity. A double-en travesti farce of identity-crisis and quid pro quo, in which Nature triumphs over human presumption and
foolishness, this ‘bouffonerie’ takes place ‘at 25,000 kilometres from Nanterre, 473 years before the invention of the chamber pot’.

On the island of Tulipatan, King Cacatois XXII is unaware that his only son, Alexis – whose gentle disposition dismays him – is in fact biologically, his
daughter, disguised as such by his wife who refused to have another attempt at producing the heir to the throne so craved for by her husband.
Coincidentally, in order to avoid her child being conscripted into the army, Theodorine, the wife of the Duke’s steward, Field Marshall Rhomboid, has also
deceived her husband: their daughter, Hermosa, is in fact a boy, because the anxious mother could not bear the thought of losing him to military service.
Alexis and Hermosa are engaged to be married but their ignorance of their true sex spawns a string of misunderstandings until self-awakening and
gender-realignment ensue, to the satisfaction of all. But, not before a multitude of farcical opportunities which neither Offenbach nor Clarke neglect to
exploit to the full. 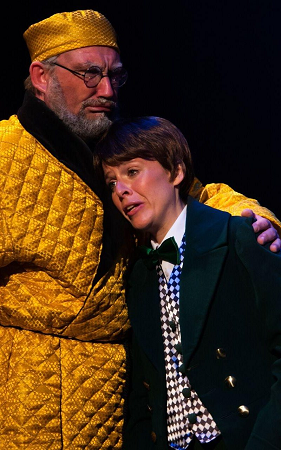 Caroline Kennedy’s emerald-frock-coated Prince Alexis delivered ‘his’ sentimental romance on the death of his pet bird with bell-like purity, touching
sincerity, not a hint of mockery and just the right amount of mawkishness. After the tomfooleries of Croquefer, Kennedy really showed her
dramatic range here using her voice and face most expressively. Her naÔve curiosity when faced with the veracity of her femininity – ironically dressed in
a green and purple gown with black Doc Martins – was heart-winning.

Costumer Isobel Fellow supplemented the absurdities of the plot with costumes of garish complementary hue and Hermosa’s lurid pink frock with zebra
accessories made for a wonderfully incongruous clash with the swaggering sentiments of Hermosa’s military song. This was a terrific performance from Flaum
who, in drag, seemed to have taken inspiration from the late Les Dawson’s pantomime-dame arm-folding, hand-bag clutching and gurning grimaces. 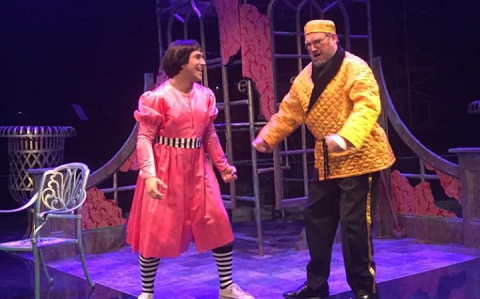 Ashmore’s crenellated tower had been stripped of its battlements to reveal the crimson and gold flock-wallpaper of Rhomboid’s shabby-chic chateaux: a
fitting setting for Lynsey Docherty’s Theodorine who had clearly wandered off the set of Ab Fab and whose lugubrious inebriation would have given
Edina a good run for her money. Docherty’s insouciant indifference when she sweetened the Duke’s tea with a sugar-lump salvaged from his foot-bath was
priceless.

Carl Sanderson’s Field Marshall and Paul Featherstone’s Duke were once again a superb double-act: their performances were full of vitality. Featherstone
minced with ludicrous pomposity, resplendent in red velvet knickerbockers and diamond-patterned stockings. This was Alice in Wonderland meets
Oscar Wilde: the Knave of Hearts had somehow found himself in The Importance of Being Earnest. Featherstone may have ‘delivered’ his numbers – a
political satire with animal imitations, and a tongue-in-cheek ‘bacarolle’ – rather than sung them, but that didn’t lessen their spiciness or Èclat.

Offenbach’s two scores may not be sparkling with musical invention – indeed, sometimes the music seemed to play second fiddle to the farcical comedy – but
the composer had an innate flair for heightening theatrical comedy with a catchy tune and a touch of musical twinkle, and the nine instrumentalists played
the score with evident enjoyment and vibrancy. Purser kept things whipping along, but judiciously allowed the cast to make the comic moments tell.

In any case, Clarke’s playful improprieties and droll rhyming couplets could turn even the most mundane melody into a memorable ear-tickler: “So here’s a
happy ending to our curious farce/ A tale of gender-bending in the upper class.” In this delicious double-bill, Clarke entwined madness and merriment, and
coated both with tenderness: quite simply, irresistible.

Jacques Offenbach: Croquefer, or The Last of the Paladins (1857)