As presented by the redoubtable Santa Fe Opera, Mozart’s notorious Spaniard Don Giovanni plays out his conquests and misdeeds in a nondescript netherworld of many-doored black lacquer walls that recede to the wide-open vista of the Sangre de Cristo mountains upstage.

While this spare physical production does not actually deter Mozart’s genius from shining through, nor does it do awfully much to enhance it. As the overture sounds, white-wigged servants end their pre-downbeat milling about the bare stage to scurry and stand in two lines stage left and right guarding the doors.

The central scenic image from designer Riccardo Hernandez soon comes into view: a huge stylized spectral bust that slowly rises into the sightline far upstage, then rolls forward to up center. And that, my friends is pretty much the set. The attractive lighting designed by Marcus Doshi does take advantage of the sculpture’s reflective properties and manages some nice mosaic and foliage patterns, and also finds good purpose for the practical sconces lining the walls. I was impressed by projections in the Act One finale, multiple portrait images of the Don’s female conquests. 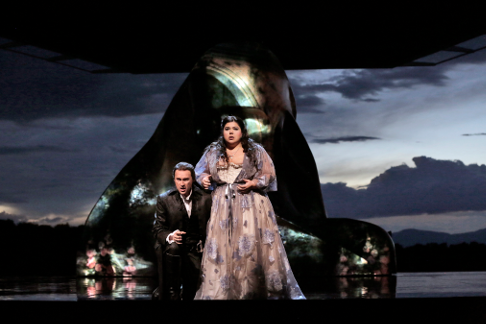 But truth to tell, once we are given head at the top of the show, that pretty much sums up the “look.” An exception could arguably be made for the copper bathtub that arises from the trap, to reveal the Don enjoying his bath. That momentary inset also allowed the leading baritone an opportunity to continue his penchant for nonchalant baring of skin. Alas, just as he stepped out of the bath, he was demurely covered by two beach-towel-bearing servants, thereby frustrating many binocular-poised patrons.

Emily Rebholz’s lavish period costumes were very pleasing to look upon, perhaps more pleasing than they were to wear since the men’s attire especially looked cumbersome and a bit earthbound. The women fared better. Kudos are in order for the exceptionally flattering gowns for Donna Anna, effectively imbuing slimming stature and sensuality. The jealousy-green number for Donna Elvira was most telling, and Zerlina’s folk dress was all charming simplicity. The avenging trios’ richly detailed capes lent flowing elegance to the end of Act One.

Significantly, Santa Fe managed to assemble a Dream Team of stars to people its cast for this enduring masterpiece. First among equals, that remarkable artist Kyle Ketelsen proved yet again that he is currently the world’s leading exponent of the scene-stealing Leporello. This is arguably the most richly complicated character in the show, if not the entire Mozart canon, and at this point in his career there is absolutely nothing about the part that eludes him. Mr. Ketelsen has meticulously refined his interpretation through performances of the part in many (Most? All?) of the world’s great houses. Long may he reign.

Kyle’s savvy take on the co-dependent servant has everything a fascinating, exhaustive character study could want. And, even more importantly, he sings it all with a polished, suave bass-baritone that is as gorgeously produced as any in the business. His is a definitive portrayal.

But the opera is not called Leporello, and the charismatic Daniel Okulitch brings all of his familiar skills to bear in the title role. His pleasant, present baritone falls easily on the ear, and his lithe, handsome physique pleases the eye. Mr. Okulitch’s natural stage presence and ample charisma are all decided plusses. Of course, for the story to work we have to believe that everybody and anybody can be lured to have hot monkey love with this debaucher. And believe it, we do. 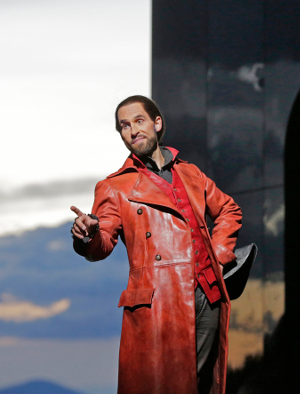 His challenge is such that he must win over the audience in spite of the almost insurmountable complication of starting the evening, interrupted in mid-rape by a woman’s father, whom he kills! (Oh, that! So much for this being a dramma ‘giocoso.’) To his great credit, Daniel manages to engage us in his well-sung philandering, although I do occasionally wish his pleasant instrument had a bit more heft in the lower range, to impart gravitas and menace.

The prodigiously talented soprano Leah Crocetto offered her best work yet as Donna Anna. Ms. Crocetto has a ravishing spinto sound, to be sure, effortlessly produced. On this occasion, she for once also demonstrated refined dramatic detail. Leah can sometimes be long on creamy tone and short on dramatic intent, but not so here. Her impassioned delivery was compelling, and she could modulate her delivery to encompass both plangent lamentation and resolved conspiracy, with excellent specificity.

Keri Alkema deployed her meaty, zesty soprano to considerably fine effect as a spunky Donna Elvira, potently aggressive when required, but flexible and malleable when so scored. Her fluid coloratura brought real meaning to Mozart’s melismas and her stylish phrasing brought grit and humor to her relentless pursuit of justice. The role of Don Ottavio might have been written for the soaring, honeyed tones of Edgaras Montvidas who overcame the dramatic vapidity of this long-suffering paramour by regaling us with his ravishing lyric tenor in a refined vocal delivery.

As Zerlina, the charming Rhian Lois voiced the role with a slender, delightful, silvery tones of the sort we don’t often hear in a role which has been taken over by heavier sopranos and (even) mezzos in recent years. Ms. Lois’ flawlessly produced soprano and her highly musical singing was a fine complement to the other ladies, and she even made the balance of power far more interesting. 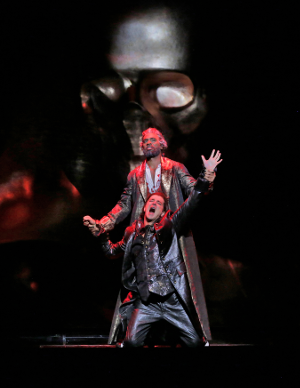 Apprentice Artist Jarrett Ott offered a restlessly youthful, winningly voiced Masetto, his smooth, well-schooled baritone a thing of great beauty. Mr. Ott is surely going to find even more dimension in this role as he matures as an artist. Rounding out the cast, young bass-bartione Soloman Howard keeps consistently fulfilling his great promise with a solid, potent performance as a full-voiced, orotund Commendatore.

The top-tier musicians in the pit were led with knowing style by seasoned conductor John Nelson. Some of the tempi were on the slower side, and after a rather languid overture, Maestro Nelson discovered a more deliberate, impelling reading. The skilled orchestra performed conscientiously, exploring rich details with a harmonious accord on Mozartean style.

However, many solo singers tended to drag a few passages (the sterling Mr. Ketelsen always being the exception). For example, the last stretto 6/8 section of La ci darem did not live up to conductor’s correctly heady tempo. Phrase endings tended to broaden, with singers ending out of sync with their skillful band. The accomplished Mr. Nelson is imminently capable of a bit more controlling authority and unity of tempi.

Given the tremendous potential of such a world-class cast, director Ron Daniels sadly discovered little meaningful insight to motivate and inspire this awesome assemblage. Stage movement was functional but hardly innovative, and I had the distinct feeling that the talented ensemble was bringing more of their own experiences with their parts to bear in a staging that was merely competent. The result was more a missed opportunity than the unbridled triumph it might have been.