The dress rehearsal in Salzburg, August 16, 1944, of Richard Strauss’ penultimate opera was its premiere and only performance until the 1952 Salzburg Festival (all Third Reich theaters had been closed in late July, 1944). The Covent Garden premiere was in 1953, the Santa Fe Opera American premiere in 1982. In recent years the opera, when attempted, is usually rendered in concert rather than staged.
Thus any new production of Die Liebe der Danae is of great interest — even Salzburg has given it only one other production in the past 65 years! This new production by Latvian stage director Alvis Hermanis imbues the opera with a requisite splendor and conceptual depth that fully complements the surpassing complexities and difficulties of the Strauss score.
Danae, daughter of bankrupt Pollux, has dreamt of gold. If Midas will marry Danae the household will be saved. Three and one half hours later Midas has lost his touch but gained a contented Danae after a monumental tussle with Jupiter who has paid off Pollux’s creditors and finally understands that love is more powerful than riches.
All this was actually Strauss’ formidable librettist Von Hofmannstahl’s idea back in the 1920’s who dubbed it a Marriage of Convenience. Not at all in the Roman tradition of Italian comedy, in the spirit of his times Strauss liked to think of his opera as the union of German music and the Greek soul.

Director Hermanis worked in bold strokes. The hugely wide stage of the Grosses Festspielhaus was an all white wall and floor, a pyramid of white boxes mounting to a shuttered oblong box. Making the Turkish setting of the Midas myth his backdrop Hermanis mined the riches of Turkish turbans and Oriental carpets. He included Hollywood musicals of the 1930’s (Busby Berkeley’s Gold Diggers comes to mind), and Islam to boot (the final scene is Midas’ harem — 12 women in white burqa contentedly weaving rugs).
Jupiter’s harem were 12 Las Vegas style dancers in gold body stockings tirelessly executing sophisticated geometric routines. Hermanis well exploited the talents of Russian choreographer Alla Sigalova who among other jobs is the choreographer for the Russian version of Dancing with the Stars!
Like the Strauss score the staging was spectacular above all else. 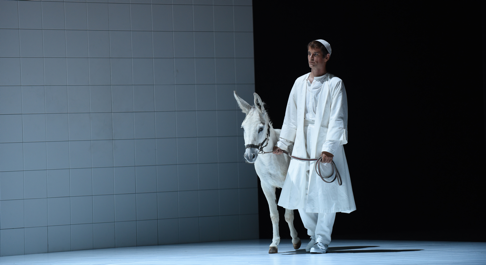 The donkey led by its trainer

And the coup de thÈ‚tre — the mule of the newly impoverished Midas — a real, alive white donkey led across the elevated open box in the now pristine whiteness of the entire stage! Like Strauss’ “love” it was at last something real in this world of riches. It was an almost shocking moment, even moving in the context of the overripe world of Straussian post Romanticism.
Conductor Franz Welser-Mˆst musically commanded all this most actively plus directing the wondrous splendors of Straussian forces of the Vienna Philharmonic. The grand conductorial traditions of this Von Karajan-designed theater were firmly in place.
Die Liebe der Danae is ultimate Strauss demanding ultimate virtuosity and bravura on all levels, most certainly from the singers. Bulgarian soprano Krassimira Stoyanova negotiated the unrelenting high tessatura of Danae with ease in unflagging golden tone. German tenor Gerhard Siegel, well-known as a Wagner Mime, fulfilled the character demands of the Midas role without fully finding its romantic color, and managed its high tessatura with some difficulties. Polish bass baritone Tomasz Konieczny found both the brashness and the humanity of Jupiter, and delivered his final scene of blessing with utmost elegance. Austrian tenor Norbert Ernst portrayed a dynamic Mercury and Austrian tenor Wolfgang Ablinger-Sperrhacke made Pollux desperate indeed.
Unusual for Strauss were the ensemble scenes — complex machinations of vocal lines managed by a quartet of Pollux’ nephews, and a quartet of their wives who are also former conquests of Jupiter. Unusual also was the duet of Danae and her maid, sung by Austrian soprano Regine Hangler, discussing DanaÎ’s dream, the voices weaving equally in and out of the upper ranges.
The star of the show (second performance) was however the donkey who marched center stage and refused to go further. It turned its head to stare directly at the 2400 of us staring back. As any star might it very reluctantly left the stage. Note that its third act entrance was very disciplined.