The part is after all, a Big Sing, and poses interpretive spinto requirements that challenge many a skillful soprano. To no one’s surprise, Ms. Racette mined gold out of the heroine’s wealth of diverse musico-dramatic material.

Indeed, It was hard to believe that this was her first outing with Fanciulla, such was her well-rounded understanding and highly effective communication of the role. Her instrument remains one of the most responsive and secure in operadom, and she possesses a distinctive womanly warmth from the lower to upper middle ranges that is impossible to resist.

She can be engagingly conversational one minute and highly excitable the next. When called upon, she can hurl out gleaming phrases above the staff that ring out thrillingly above the large orchestra. If she occasionally pushes the upper voice ‘just’ beyond its natural limit, it is always in heat-of-the-moment service to the drama. The love duet was meltingly voiced, and Patricia spun out filigrees of perfection in the Bible reading scene. In short, Patricia Racette is already among the top Minnie’s of our day, and from this starting point of ‘triumphant’ she is only going to get even better. 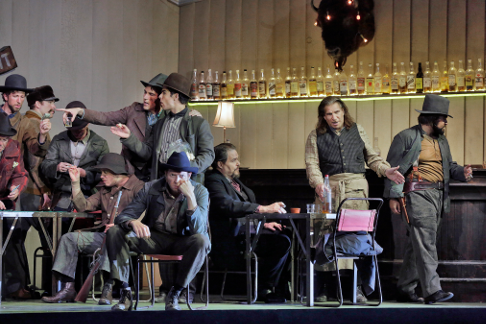 Mark Delavan seems born to play Jack Rance. His oversize presence and stage personality are wedded to an imposing, rock-solid, dark hued baritone. That awesome total package results in a perfect fit for the demands of the unyielding, unseemly, and unpleasant sheriff Jack Rance. This is my favorite role assumption to date for this accomplished, seasoned singer. Rance allows Mr. Delavan to show off all of his many strengths, and he proves an unrelenting vocal powerhouse. The intensity that he and Ms. Racette achieved in the famed Poker Scene was a model of its kind.

The full house seemed to enthusiastically enjoy brawny tenor Gwyn Hughes Jones even more than I did as Dick Johnson. There is much to admire in his evenly produced, heavy lyric tenor. He is especially wonderful when he is letting his clean, pleasing tone flow forth effortlessly with good legato. Mr. Hughes Jones has a bit less success when the going gets heavier, occasionally bearing down so that his lovely sound gets harder and less sympathetic. He was especially moving as he scored all the musical and emotional points in Ch’ella mi creda.

Allan Glassman offered a consistently interesting personality as the bar owner Nick, and his reliable tenor was deployed with insight and meaningful dramatic intent. Craig Verm’s rich, full-throated baritone made Sonora an important component in the evening’s success. It was luxury casting to have Raymond Aceto to lavish the part of Ashby with powerful phrasings from his pointed, polished bass-baritone. 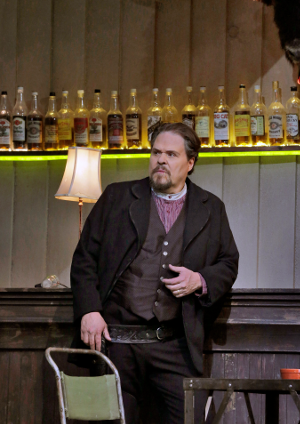 The entire gifted ensemble worked hard and well. Under Susanne Sheston’s assured leadership, choral singing was of a high standard. The many cameos were so well realized that it may be odious to single out any few. That said, Nicholas Davis’ rolling, mellifluous baritone made a significant impression as Jake; Adrian Smith’s well-voiced Larkens was memorably affecting; and Allen Higgs’ urgent, focused baritone made the most of his stage time as JosÈ Castro. Even the most thankless roles in the opera were well-served, with Kristen Choi bringing an appealing mezzo to Wowkle and James Harrington summoning bold, secure baritone singing as Billy Jackrabbit.

The most often heard comment the whole week I was at Santa Fe Opera: When you are doing an opera about the Golden West, and you have a stage with a back wall open to a genuine vista of ‘golden west’ hills, why cover up that natural match with a set? (And a not very atmospheric set at that.)

Well, the answer seems to be that this was a collaboration with English National Opera whose home theatre (the Coliseum) does not have nature’s scenery available (St. Martin’s Lane, anyone?) Still, set designer Miriam Buether has crafted a rather garish Polka Saloon that appears more a warehouse with spare appointments than an evocative Old West tavern. Indeed, once Mimi Jordan Sherin began her lighting design with sickly, day-glo green lighting, the place started out looking more like a wannabe hipster bar on the Vegas Strip. Once past that first impression, Ms. Sherin mellowed the look to an effective, unobtrusive collection of area washes and isolated specials.

Crowded placement of tables and chairs, with only one entrance upstage behind them, made for congested movement, and stymied a successful star entrance for Minnie. Still, the separate dance hall stage right and the secure room for the safe stage left were good touches even though they too lacked meaningful detail. Minnie’s cabin looked like a two-story Ikea dollhouse, all tidy and blond with clean angles. The wide upstage windows were covered by a drape that kept getting pulled open and closed, and the table and two chairs kept getting moved around with no tangible motivation. Curiously, the sound effect of wind gusts stayed at the same volume even when the door was opened or closed during a cue. 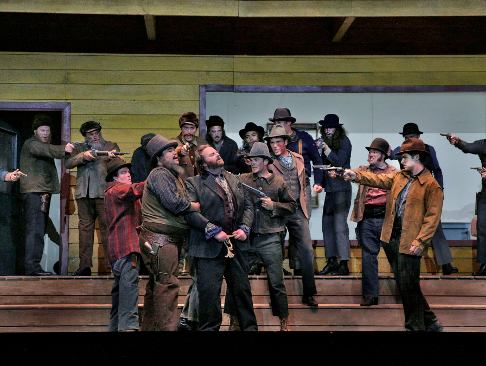 Act Three was not in the “Great Californian Forest at Dawn,” as specified in the script but rather on the wooden front porch/faÁade of the sheriff’s office building. This had a couple of steps what were used for rather formal choral groupings. The gun rack on the wall in Rance’s office, and the plethora of guns being trained on Johnson in this act began to seem like a commentary on the profusion of weapons in the US.

Richard Jones made interesting decisions in his staging and he was quite effective in scenes with smaller number of characters where he fostered good interaction, motivated blocking, and useful subtext. When Mr. Jones had to move larger numbers of people in Act One, he often left them clustered and cluttered, with an appearance of imprecise traffic control. Conversely, Act Three’s crowd scene was by turns too neat (with even lines of miners on the platforms), or too messily ‘violent’ to the point of being laughable. When Johnson gets methodically passed down the forward line of men from stage right to left, getting individually punched, kneed, and brutalized, I couldn’t help but think of that scene in Airplane, in which fellow passengers line up to take their turn at slapping a seatmate out of her hysteria.

Lucy Burge’s choreography for the miners’ dancing together in Act One was well coordinated and charming. However, having the group of men get on those Act Three steps like a show choir, raise a pistol in unison in their right hand and then, en masse, execute something that was a cross between The Pony and Arsenio Hall’s fist bumps was just plumb silly, totally out of character and context.

Best for last: the Santa Fe Opera orchestra was in absolutely superb form. From the first hammered chords, Emmanuel Villaume was firmly, thrillingly in charge of a reading that was stunning from initial downbeat to finale cut-off. The Maestro was a cunning Pied Piper, leading his amassed forces with meticulous dramatic intent and unfaltering attention to detail, whether nurturing articulate solo statements, or guiding lush ensembles (oh, those gorgeous tutti strings!). Under Villaume, the band and cast rose to meet every atmospheric requirement that Puccini (and Puccinians) could dare to wish.