They premiered it in 1847, a few years before the play appeared in Italian. A lifelong lover of the English Bard’s plays, in 1865, Verdi revised and expanded the opera with the help of Andrea Maffei for presentation in Paris. All of this was before Verdi wrote Otello, which he staged in 1887 or Falstaff, his last opera, which premiered in 1893.

In his program article on Macbeth, Music Director James Conlon notes, “It has been observed that Verdi’s opera is a tragedy for the royal couple but a comedy for the witches.” Director Tresnjak and costume designer Suttirat Anne Larlarb have the dancers representing witches wearing stretch fabrics and long tails. From climbing holds placed high on Tresnjak and Colin McGurk’s shallow set, these witches enjoy watching people fall prey to the machinations of the Macbeths. The set took up the full width of the stage and had an upper level that often accommodated the singing members of the chorus. Its lower level had entrances which included mirrors that reflected the comings and goings of cast members. Matthew Richards’ lighting design underscored most of the situations appropriately, but it could have been more subtle for the apparitions. 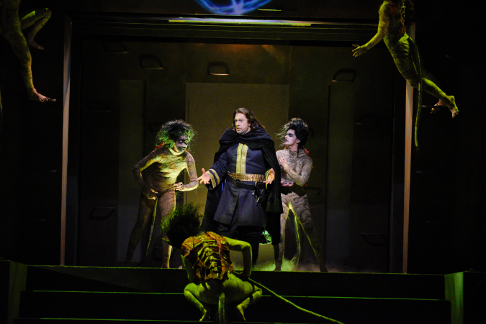 Tresnjak told the story in a literal manner that worked well for most scenes. Los Angeles Opera cast the production with glorious voices that filled the auditorium, both literally and figuratively. Pl·cido Domingo was a baritone Macbeth. Lately, his timbre has become a bit more baritonal and he has resonance on notes below the usual tenor range. Someday members of this audience will tell their grandchildren that they heard Domingo as Macbeth. He sang his part with a robust sound and his portrayal made this fierce king a real person whose lust for power had eaten away much of his soul.

Ekaterina Semenchuk did not have the ugly voice Verdi said he wanted for Lady Macbeth. Hers is a strong instrument with gorgeous overtones that made her duets with Domingo moments to be treasured. She was an ambitious wife who would help her husband attain his goals even if he faltered and she had to act for him. She sang her arias with power and a smooth opulent tone that bloomed in various vocal colors. The Banquet Scene showed her character’s mental progress while the Sleepwalking Scene showed her mind’s disintegration as she emitted clear, colorless tones with little vibrato and a staccato high note at the end. 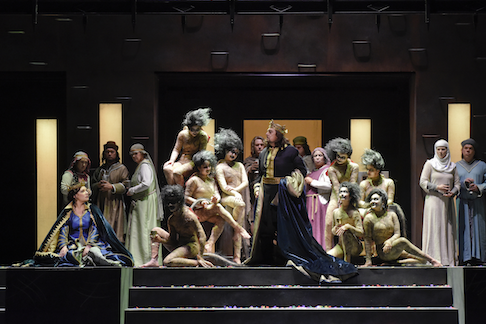 Arturo ChacÛn-Cruz was a poignant Macduff who sang with a lyrical sound and exquisite grace. He seemed surprised by the warm reception his aria garnered. Roberto Tagliavini was an understated Banquo who sang with virile dark tones. Two singers from the Domingo-Colburn-Stein Young Artists Program, Summer Hassan and Theo Hoffman, were notable for their excellent tonal quality and understandable diction. I hope to hear a great deal more from each of them. 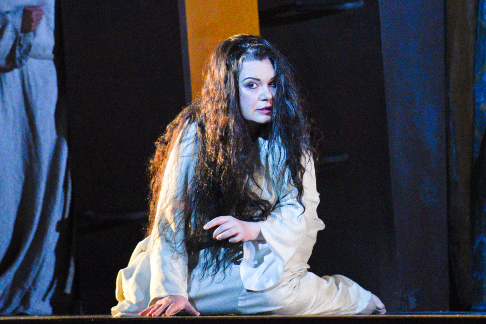 The Los Angeles Opera Chorus, led by Grant Gershon, was an integral part of the opera’s action as they sang their intriguing harmonies. Director James Conlon, who gave a fascinating per-performance lecture, brought out the myriad abilities of the soloists by always keeping the orchestral volume low while they were singing. When they were silent, Conlon’s most impressive orchestra let loose and showed their huge talents. At Macbeth’s last battle there is a little fugue at which the members of the Los Angeles Opera Orchestra brass section showed that they are all capable soloists. Macbeth is an opera that can be seen from various points of view. This production was from the witches’ perspective and it gave the audience a wonderful evening of entertainment.