The composer and his duo-librettists based their story on William Hogarth’s eighteenth century paintings and engravings. Stravinsky was living in West Hollywood when he wrote the music. Librettists Auden and Kallman were also in the US at that time.
Because The Rake’s Progress requires a chorus and a larger orchestra than POP usually offers, these performances were held at Occidental College, a charming school located in the hills north of Los Angeles. Director Desiree La Vertu guided about a dozen choristers from the college glee club through Stravinsky’s unusual harmonies while POP co-founder and conductor Stephen Karr led twenty-five of the school’s excellent instrumentalists as they accompanied the singers. 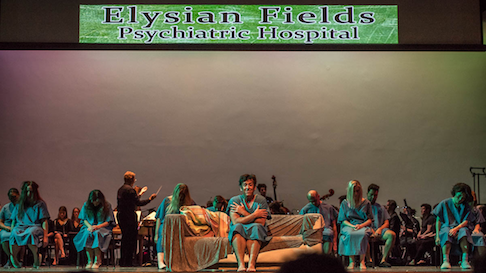 POP co-founder, stage director, and designer Josh Shaw updated his show to the 1970s but kept it in England. His simple settings effectively placed the action in the opera’s various locales: the Cyprian Queen Pub, Mother Goose’s seedy London strip club, Tom’s house, a wildly active auction yard, a cemetery and finally, the day room of the Elysian Fields Asylum. Marie Mawji’s ambient lighting design and Maggie Green’s seventies era costumes helped secure the time and place of each scene.
In Act I, Tom Rakewell works in Father Trulove’s pub along with Anne, but when Nick Shadow tells him he has an inheritance waiting for him in London, he goes off to pursue whatever pleasures the money can buy. In a thoughtless moment, Tom agrees to pay Nick for his services at the end of “a year and a day.” Brian Cheney was a sympathetic, clear voiced Tom who—at the beginning—merely wanted a good life for himself and Anne, the girl on whose love he knows he can depend. 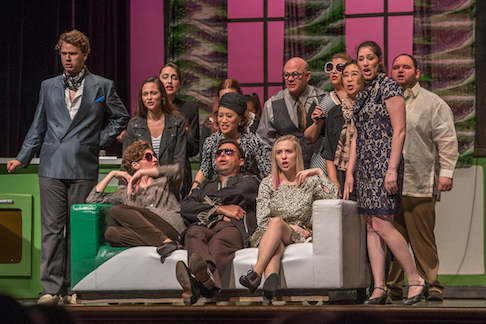 Rachele Schmiege was a strong Anne who held her ground both vocally and histrionically. Her aria “No word from Tom” probably brought back memories to a great many audience members who have waited for silent phones to ring. Patrick Blackwell sang Father Trulove with luxurious bass tones that made me want to hear a great deal more of him. Hope POP has him back in a larger part very soon. Adrian Rosas was a wily Nick whose solid voice and unctuous character seemed related to Gounod’s and Boito’s devils. One of the reasons for POP’s popularity is Shaw’s insistence on hiring the best voices available.
Adelaide Sinclair was a loquacious Baba the Turk with a strong voice and a constantly flapping black beard. When Tom dropped a box over her head, the audience had a good laugh and he finally got a chance to complete a sentence. Danielle Marcelle Bond was an alluring bawdyhouse manager, Joel David Balzun a memorable madhouse keeper and Robert Norman a fascinating auctioneer whose minions wheeled him around together with his outsized desk. 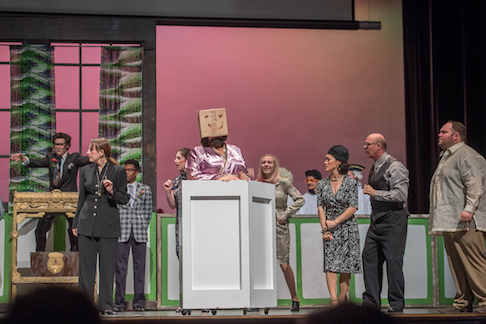 In the final scenes, especially the epilogue in which various characters warn listeners, often humorously but sometimes seriously, of the evil that can befall those who look for easy money. The audience could easily draw parallels between the final scene of this opera and that of Mozart’s Don Giovanni.
The artists and craftspeople who make up POP managed to make their work look easy while service people made sure audience members never lacked for creature comforts or glasses of something cool and tasty. A Pacific Opera Project performance is a fine place for a visitor to Los Angeles to relax on a fall afternoon or evening.
Maria Nockin