On opening night there was really only one redeeming factor­ —
Stefano La Colla’s Des Grieux. He is that rare vocal species, a spinto
tenor with a beautiful, ardent timbre and the required heft for Manon’s
tormented lover. La Colla rode all the role’s vocal crests without
forcing. Theatrically, however, director Andrea Breth left him flailing until
the last act. At the start of Act I, Manon and Des Grieux are already prostrate
in the “bare and undulating” American landscape where she expires
of exhaustion. The lovers keep rising from the sand to enact Manon’s life
from the moment she and Des Grieux meet and fall in love in Amiens, against a
sterile-white set. Disastrously for Des Grieux’s character, they move
slowly, as if in a dream. Instead of a lover crazed by the irresistible but
capricious Manon, he comes across as a morose semi-cadaver. La Colla’s
connection with Eva-Maria Westbroek’s temptress was painfully awkward; he
might as well have been making love to a dressmaker’s dummy. The
playfully cynical “Tra voi, belle”, which Des Grieux sings before
he sets eyes on Manon, was staged as an angry, misogynistic rant — a
criminal waste of La Colla’s blazing, Italianate sound.  That he can
actually act became evident in the final act, when Manon stops dreaming while
dying, and actually starts dying. Called upon to act naturalistically, his
singing also gained in intensity, but by then it was too late. 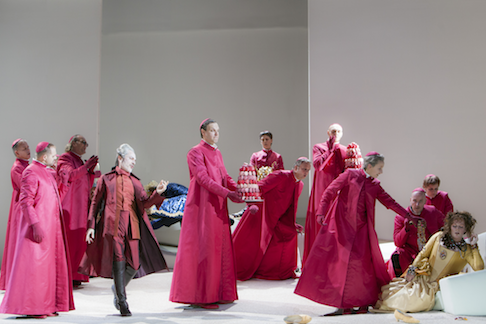 Being superlative actors, both Eva-Maria Westbroek and Thomas Oliemans as
her foppish, parasitic brother, Lescaut, periodically broke through the
flashback fog to breathe life into their characters. Unfortunately, although
his musicianship was at his usual high level, Oliemans just does not have a
baritone of Puccinian dimensions. His voice lacked enough impact at key
moments. Westbroek looked exquisite in her 18th century finery. When
not moving as if through molasses, she captured Manon’s many facets, most
lucidly her boredom and frustration as Geronte’s mistress. The caressing
looks she gave the jewels he had bought her made her inability to part with
them, followed by her arrest and deportation as a thief, completely logical.
Vocally, however, Westbroek was not at her best. Her generous vibrato had a
mind of its own and her unique, platinum timbre sounded steely. Moments such as
the rueful “In quelle trine morbide” and Manon’s gavotte
required more tonal tenderness. Westbroek brought her great skills as a
tragedienne to the finale, although in “Sola, perduta, abbandonata”
volume triumphed over pathos, not least because of Alexander Joel’s
enthusiastic but unsubtle conducting.

Joel led the Netherlands Philharmonic and the well-prepared DNO chorus in a
variable performance that was at times pleasingly ebullient, often too loud,
and marred in places with unsure entrances and tempo tugging. The high point of
the performance was Manon’s frothy levee and dancing lesson, the low
point the Act II Intermezzo, with sawtoothed sforzandi and the tragic depth of
a bowl of spilled milk. Uncertainty about tempo could explain why Alessandro
Scotto di Luzio made an equivocal impression as the lovers’ ally Edmondo,
in spite of his lovely lyric tenor and strong stage presence. In the supporting
roles, only booming bass Guillaume Antoine as the Innkeeper and the Sergeant
offered worthy support. Alan Coulombe’s Geronte was gruff without being
intimidating. Eva Kroon’s Madrigal Singer and her chorus made a striking
flock of nuns with outstretched wimples, but sounded thick and out-of-sync. 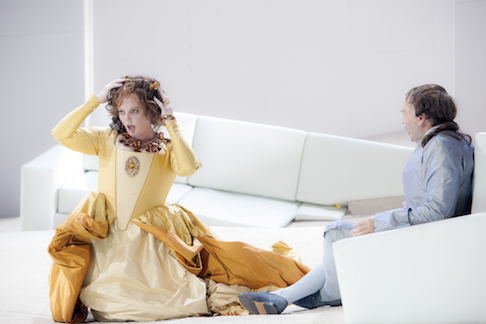 Eva-Maria Westbroek as Manon Lescaut and Thomas Oliemans as Lescaut

The nuns, like most other characters, were garbed in the sartorial hyperbole
of Federico Fellini’s 1976 film Casanova. Moidele Bickel, who
passed away while working on the designs, and Eva Dessecker, encrusted the cast
in spendour. They even reproduced specific costumes from the film, such as the
gold-and-silver insectoid outfit for the Dancing Master, in which Peter Hoare
performed some embarrassingly silly moves. It was not clear how Breth’s
tribute to Fellini served the opera, except as a superficial aesthetic glaze.
Puccini’s sundry street characters in Act I were transformed into an
immobile masked chorus in black. They suggested the clergy, Des Grieux’s
designated destiny before fatal attraction intervenes, and also carrion crow
waiting to feed on Manon’s corpse. Four acts later, the production had
not explored these themes any further. Dance doubles casting Manon as a victim
of male violence and other distractions were just more signposts to nowhere. In
the meantime, the supposedly entangled lovers circled each other as if they
feared contracting the plague. By the time they fell into each other’s
arms on the sand dunes, nobody really cared whether they survived or were
devoured by scavengers.