Mr. Jones and team have taken the courtly setting of the piece Handel wrote and displaced it from a medieval palace to a remote 1960’s Scottish island ”kingdom.” And although the King is still a character, the updated “realm” consists of a massive, unattractive setting that is one large part community meeting hall and one small part private residence. Well, “residence” in the sense that Ginerva’s bedroom and a cramped, ill-used “foyer” were all that were seen other than the rather primitive common room.
From the numbingly ugly bedroom wallpaper, to the floating doorknobs that open/close non-existent “doors,” to the confusing configuration of entrances, this was a depressing, intentionally dull atmosphere, meant to convey a mandated routine and an oppressive societal structure. Set designer ULTZ was also responsible for the drab, purposefully provincial costumes. The attire was at times confusing (chorus women were dressed as men but danced as women), at best functional (such as the wedding gown that gets passed around), and at worst, defeating (the titular prince looks like a hang-dog village simpleton). Although the whole dwelling was covered with a realistic ceiling which prevented down-lighting, Mimi Jordan Sherin provided an admirable lighting design that featured evenly produced washes and meaningful area illumination.
So what was this concept all about? Some program ink was taken up justifying Ginerva as the main focus (Handel be damned), pursuing a rather heavy-handed subtext that she is forced into assuming the limiting woman’s role that society demands of her. To that end, Duke Polinesso was repurposed as a hypocritical evangelist who is in actuality an unrestrained sexual predator. More program notes expounded about Ibsen and Strindberg as some sort of inspiration for this interpretation, but that was not born out by inconsistent staging choices.
The ensemble (singing well under Sandra Horst’s tutelage) was treated more like a Greek chorus than anything those Scandinavian writers might have inspired. Often (make that “too often”) the chorus would enter or exit in single file, as if in some unspoken ritual that involved moving the wooded chairs on, off, and around stage like a poor man’s bus-and-truck tour of Grand Hotel. When they tired of that, they moved the heavy table to and fro. And characters certainly did not behave realistically, clambering over, on and under furniture as they ignored each other and sought merely to create different visual levels.
Characters that were said to be “asleep” had their eyes wide open, those said to be “kneeling” were standing, those hailed as being “together” were apart, well, you get the idea. Just like in a slam-bang, authentic Hedda Gabler, right? You can only stage against the text so many times before an audience tunes out. As if this weren’t enough, puppets were added to comment on the action at the ends of each act. 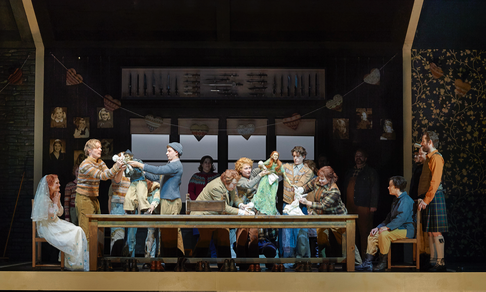 A scene with puppets
Without meaning to insult anyone’s appeal in any way, it is telling that the puppets are actually more engaging than the live singers. The marionette enactment of marriage and family life at the end of One was a breath of delightful whimsy. But then came the thudding scenario at the end of Two in which mini-“Ginerva” was tarted up as a red-pumped, street-walking pole dancer. I am not making this up. The show ended with an Instant Replay of the end of One’s marital bliss, except with the real Ginerva packing a suitcase and leaving: the scene, the set, the show. The actress walked down off the raised set onto the front apron (unobserved by anyone else on stage), and made some odd gesture(s) as if to tell the follow-spot operator to kill her light. What ‘that’ meant prompted much discussion as patrons exited the theatre. No one in earshot understood it, but then I am not sure “understanding” Ariodante was what this staging was about. Talking about it was enough.
I will say that taken on its own terms, it was all of a piece. Within its dramatic suppositions, character relationships were clear, the plot was clear enough, and given the highly accomplished musical execution, the oddities were mostly forgivable even as they were often unhelpful. The completely unsavory take on Polinesso did neither the show nor the cross-dressing performer any favors. We should have a love-hate relationship with this character, but there was such an “ick” factor in the brutal rape scene that it was impossible to connect with the talented singer. Sigh. 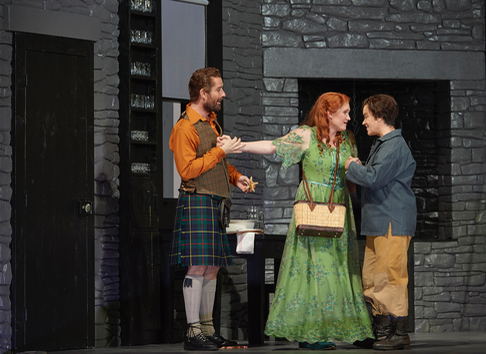 Johannes Weisser as the King of Scotland, Jane Archibald as Ginevra, Alice Coote as Ariodante,
Which returns us now to “sumptuously sung.” COC has spared no effort in assembling a veritable Dream Team of Handelians to sweep almost all of this before it. Alice Coote is at the top her considerable game in the title role, with every perfectly judged phrase confirming the impression that she has few (any?) equals in this Fach. Not only does Ms. Coote have a ripe, rich tone, but she also negotiates page after page of ungodly rapid coloratura with trip hammer accuracy. In addition to the fire, sass and brass she brings to such explosive passages, this talented artist can turn on a dime and offer limpid, affecting, introspective stretches of poised, hushed beauty.
I first encountered the equally thrilling soprano Jane Archibald in Semele with this same company, and as jaw-dropping as was that performance, she has only grown even finer in the interim. As Ginevra, Ms. Archibald summons a luxuriant tone, an unerring technique, and a compelling delivery to prove every inch a match for her Ariodante. When Alice and Jane duet late in the show, their almost mystic melismas tumbling over each other in haunting beauty, you got the impression this perfection was not meant merely for human ears.
In the trouser role of Polinesso, Varduhi Abrahamyan sported a creamy, responsive mezzo that was enormously pleasing, and admirably agile. Ms. Abrahamyan sang splendidly and went through the directed motions of sexual aggression with consistent commitment. Pity that her very real vocal achievement got eclipsed by a repugnant character concept. I will dearly look forward to encountering this wonderful singer in a happier situation. Dalinda was embodied by the assured soprano Ambur Braid portraying an endearing character, in this case made more sympathetic by the “concept.” Her subservient, sometimes cowering demeanor drew us in, and was well complemented by her secure, idiomatic singing. Impressive throughout, she was especially potent as she unleashed any number of gleaming phrases at full throttle.
At first, the role of Lurcanio seems like an after thought, even as winningly sung by Owen McCausland. Mr. McCausland made a good impression in his first aria, sharing a mellow, well-modulated tenor, albeit with a hint or two of strain at the very top. As the performance progressed, everything settled into place as he went from strength to strength, and assumed a progressively more integral role in the story. Young Aaron Sheppard had few lines as Odoardo, but served notice that his is a talent of good promise.
Among this roster of exceptional, almost exclusively Canadian principals, Norwegian Johannes Weisser was the King of Scotland. Mr. Weisser’s melismas were accurate enough, to be sure, but his bass is decidedly on the dry side, and he simply lacked the warm gravitas that would benefit the role.
Music Director Johannes Debus was conducting his first Handel but you would never have known it, given his total command of the style and his embrace of the dramatic possibilities. Maestro Debus proved to be a meticulous partner, not only with the accomplished singers but also with the dramatic intent of the composer and yes, even the director. His pacing of the evening was miraculous, making a long score fly by with a vibrant, informed reading.
Given the realities of having to produce popular bread-and-butter titles, COC is to be commended for not only programming this less accessible Handel opus, but then also challenging its patrons further with such a gritty re-interpretation. It is to the great credit of all concerned that the rapt audience willingly embraced the journey.
James Sohre