The Chandler audience saw the opera in the usual manner from across the orchestra pit to wherever they were seated. The park audience saw the singers so closely that they could observe their characterizations via the tiniest changes in facial expressions. Thus, the artists had to play to both the theater and HD audiences. They mingled large and small gestures so as to give each audience its due.
Opera is very different when audience members can look into a singer’s eyes and see what his character is contemplating. For opera singers and stage directors, high definition transmission is a new world. With Placido Domingo as Macbeth and Ekaterina Semenchuk as Lady Macbeth the HD audience could watch the characters’ mental machinations grow into actions. Domingo’s interpretation of the title character was as affecting as that of any fine Shakespearian actor. He was a pliable Macbeth who needed his wife to help him plan his path through life. In this production, he could even be considered her victim. For Domingo, Macbeth is a baritone role that rides comfortably on his voice and allows him to act the great Shakespearian role for which he is aptly suited. He goes from jubilant thane and insecure king to soulless death at the hand of Macduff after Lady Macbeth’s demise. 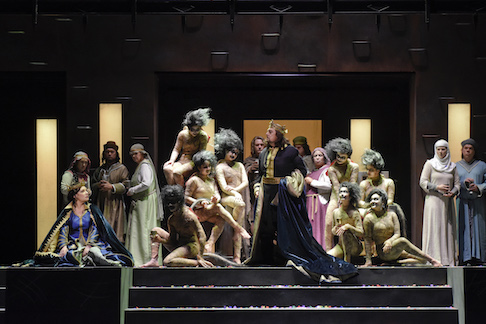 Placido Domingo (center) as Macbeth and Ekaterina Semenchuk (left) as Lady Macbeth
Semenchuk has a huge voice with a beautiful timbre. Verdi said he wanted an ugly voice for Lady Macbeth, but her gorgeous tones were most welcome, especially since she bestowed her vocal jewels more freely at this performance than she did at the performance I reviewed for Opera Today on September 22nd. This Lady was a calculating courtier who had no qualms about murder and could inspire her husband to act the part of a host when all he saw was the ghost of the murdered Banquo. At the same time, she included all the bel canto coloratura and trills that the young Verdi wrote for this early opera. Both Domingo and Semenchuk gave us a fine combination of early seventeenth century acting and early nineteenth century singing.
Ildebrando D’Arcangelo was a thought-provoking Banquo who sang with bronzed stentorian tones. Tenor Joshua Guerrero sang Macduff with the resonant golden notes that have made him an up-and-coming matinee idol. He has a sizeable voice and a secure technique so he is not restricted to light roles Having been raised in the South Gate area, he garnered wild applause from the park audience.
Although no tickets were required at South Gate Park, Los Angeles Opera personnel were at the entrance to greet opera goers and show them where to set up blankets, chairs, and picnic baskets. They even had blankets for anyone who needed them. There were food trucks in the area and a few ice cream vendors. Many families brought their children and I enjoyed watching the little girl in front of me introduce her Barbie Doll to opera. The mother of an older boy told me he had read the Macbeth Comic Book in preparation for the show.
Since most of the people in the South Gate area speak Spanish, the on-screen titles were in both Spanish and English. Perhaps we can have that at the Dorothy Chandler Pavilion soon. It was a beautiful evening with a full moon and even the songs of night birds. Los Angeles Opera gave us magnificent show that I hope draws many new enthusiasts to the opera house.
Maria Nockin