And, there is an ambiguity at the core of the opera that is not answered by the libretto or the score: did she or didn’t she? That is, was it acquiescence or rape: when we see Donna Anna frantically resisting the Don’s clutches at the start of the opera, is she desperately escaping from a sexual assailant, or trying to save her own reputation having been caught out by the importune arrival of Don Ottavio?

Moreover, there is a paradoxical question-mark hanging over the eponymous reprobate’s reputation for sexual conquest, given that, on the evidence that the
opera presents, we have only the successive failure of his strategies of seduction by which to judge.

In his new production of Don Giovanni for English National Opera, director Richard Jones dispenses with ambiguity and proposes some radical,
subversive ‘clarifications’ in an interpretation which is often morose and repeatedly overturns expectation.

First, Jones’s Giovanni is no frustrated Casanova, though he is clearly insatiable. As the overture unfolds, the huge ‘Wanted’ poster which adorns the
front curtain is raised to reveal a corridor-platform edged and lined with dull wooden doors, besides one of which Don Giovanni – haughty, sceptical, with
an air of boredom – takes position. Beside him, Leporello – a Chris Evans-lookalike with messy carrot-top wig – assumes the role of doorman. Successive
black-clad ladies process along the walk-way and prove unable to resist the shiny-suited Don’s allure: Leporello slickly whisks open the door, the donna
and the Don disappear within, only to reappear in the blink of an eye, and the promenade resumes. There’s barely time for Leporello to bend his eye to the
peep hole! It’s a walking catalogue of soulless sexual conquest, the living exemplification of Leporello’s ‘little black book’ (here, a red leather,
telephone-directory tome which he draws from his hip man-bag). And, the conveyor belt of erotic convenience is given a gender-twist when a Leporello-double
takes his turn in the pimp’s procession.

Don Giovanni
is about sex so Jones and his designer Paul Steinberg begin the action in a brothel – a labyrinthine interchange of Orwellian, slate-grey corridors with
featureless brown doors behind which imagined amatory encounters take place. Lighting designer Mimi Jordan Sherin’s chiaroscuro shadows only add to the
ominous gloom. When the front panel splits in the middle and slides back, stage-left of a partitioning corridor we see a shabby bedroom in which Giovanni
and the Don engage in bondage games. The noise of their S&M antics disturbs an old man and his concubine in the adjacent room and before she knows it
Donna Anna is confronted by her father, the Commendatore, in his grubby white long-johns. Hardly a figure of gravitas, he is stabbed in the groin by
Giovanni with his bondage knife – a grim and fatal parody of edge-play. 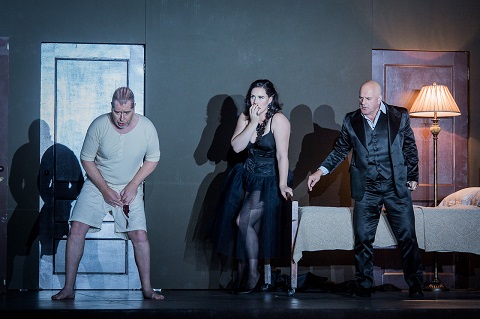 So far, so fun-lacking. And, Donna Elvira’s arrival does little to lighten the mood. Leporello’s catalogue aria – usually a moment for a director and
singer to demonstrate their comic mettle – falls strangely flat. Similarly, the rustic guests celebrating the marriage of Zerlina – the latter’s white
wedding-frock (bucolic innocence?) alleviates the prevailing black attire- and Masetto sing with all the gaiety and joy of a funeral lament, standing stock
still behind a long trellis-table which is covered with a tacky nylon table-cloth. A tiered cake leans askew in the centre, separating the disengaged
couple seated at either end, as the chorus present an epithalamium worthy of Somarone’s nuptial choir in BÈatrice et BÈnÈdict. 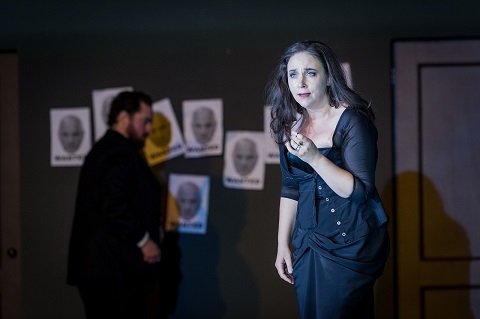 But, Giovanni’s Act 1 party lacks energy and focus; a welcome splash of colour in the form of the red satin cocktail-bar drape does not compensate for the
ugliness of the party-goers’ masks, the randomness of the apathetic streamer strewing, and the grey listlessness of the dancing and so-called ‘merriment’.
The arrival of Leporello’s air-dancing clone, however, does add a note of uncertainty and raises the tension-barometer; and as Masetto plasters the
lamp-posts and telephone boxes with ‘Wanted’ mug-shots of the Don, there is an ‘edge’ in the air.

Act 2, fortunately, brings some tongue-in-cheek diversions, not least the removal of Leporello’s ginger wig to reveal a pate as smooth and shiny as his
master’s, the perfect guise in which to woo Elvira as Giovanni sings from the side-lines. And if Jones slips into clichÈ when Giovanni picks up the
telephone in the dingy phone-box to call Elvira’s maid, it’s a neat inversion of the usual phone-sex dynamic and his seductive serenade causes her to
wriggle and squirm on a burnished gold sofa. But, we soon sink back into misery, and Zerlina is slumped centre-stage in despair as Ottavio sings his
vengeance aria, ‘Il mio tesoro’.

The graveyard scene is dramatically imposing, however. The Commendatore’s memorial is a military monument of grotesquely outsized floral wreaths and
crosses, and from atop the massive pedestal he bears down in military dress. The epigraph warns of his intent to wreak vengeance on him who has ‘cast me
into eternal darkness’. When he arrives for dinner, the Commendatore may have resorted to pyjamas once again, but James Cresswell’s sonorous bass ensures
that his threats have a fiery energy.

The extending of his bloodied hand brings about the third master-servant swap of the evening (spoiler alert!), as Leporello’s double reappears bearing yet
another carroty wig which Giovanni dons while the scalp-denuded Leporello is dragged down to the depths by the raging Commendatore. Some have argued that
the opera should end when the protagonist dies; but this Giovanni lives to ravish and rape another day. Jones gives us the closing sextet anyway – ‘Such is
the end of the evildoer: the death of a sinner always reflects his life’ – while the opening procession of potential partners recommences, with the
replacement Leporello acting as the glib door-operator.

The cast do their best to overcome the dramatic short-circuits, and on the whole the women out-sing the men. Christine Rice’s Elvira adds a thrill and
frisson which is lacking until the spurned Elvira launches into a furious ‘Ah, fuggi il traditor’ and her ‘Mi tradi’ is spine-tingling: she wildly
flourishes a revolver with the terrible unpredictability of Bertha Rochester. Mary Bevan is vocally charismatic as Zerlina, but is never allowed to reveal
her character’s charms in this production. American soprano Caitlin Lynch copes with the demands of ‘Non mi dir’ and reveals a pleasing shine to her voice. 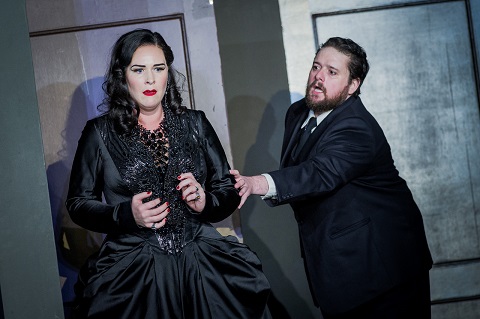 Ottavio is often something of a non-role, but Allan Clayton gives the flimsy aristo greater presence that usual with two rich, distinctively phrased arias
which deservedly won applause. Christopher Purves’ Don Giovanni indulges in lots of post-coital smoking and pacing, and swigs champagne and shucks oysters
a-plenty in sexual anticipation. It’s a wry touch before his ‘champagne aria’ and preceding the Act 2 dinner scene, in which the table is laden with
aphrodisiacs – a tier of lobsters is a mocking parody of a wedding cake. But, this Giovanni is such an unpleasant thug that it’s impossible for Purves to
win our sympathy. Clive Bayley is excellent as Leporello; his strong bass carries the text clearly and he acts with wry knowingness and subtle comic
timing. Nicholas Crawley’s Masetto does lots of scowling and prowling around in shirt-sleeves and braces, but his squad of bovver boys who hunt down
Giovanni proves ineffectual and at times his singing lacks strength and conviction. 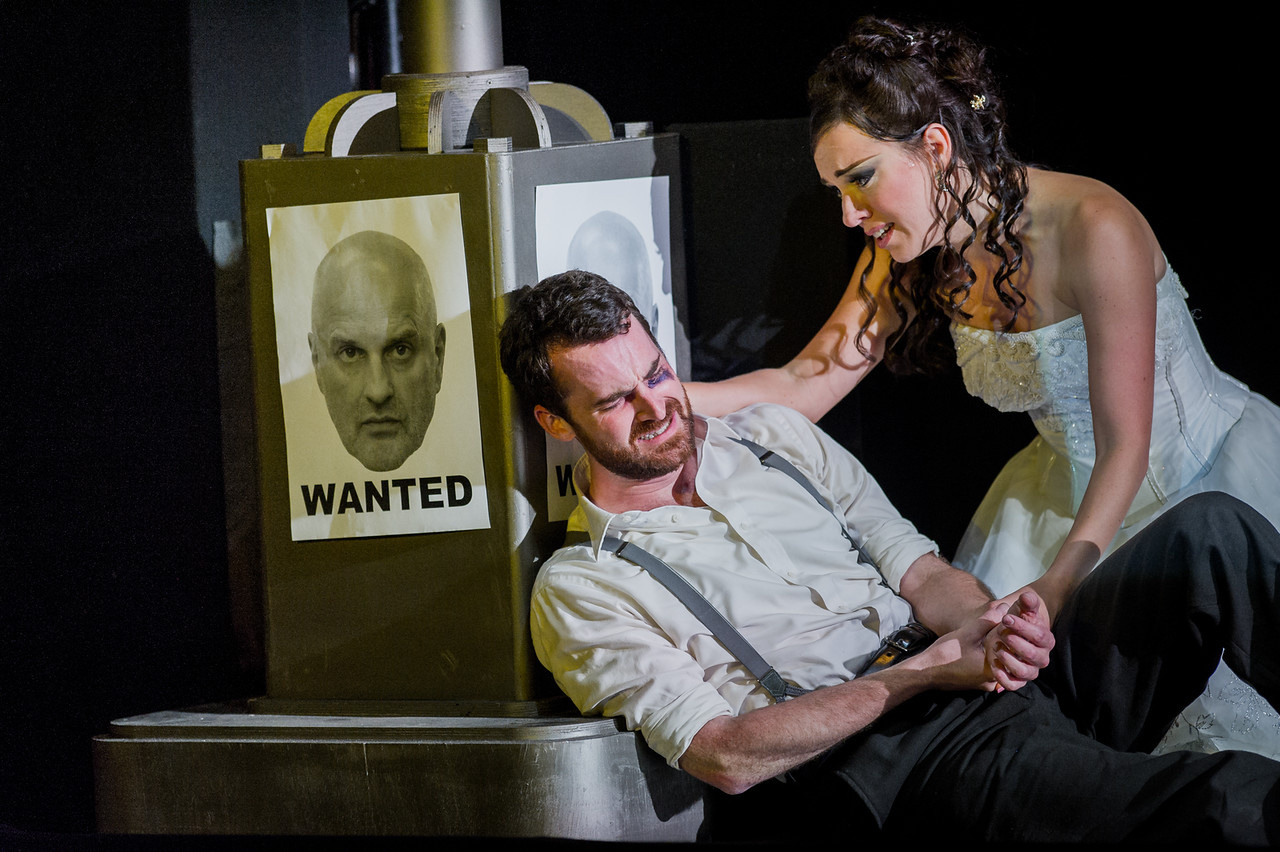 Mark Wigglesworth does all he can in the pit to provide the champagne with the requisite fizz, and the ENO Orchestra works hard and with good effect,
especially in the end-of-Act-1 finale, though there was some dodgy tuning in the masqueraders’ Trio.

So, Jones seems to be telling us that, despite the mock-heroic fugue and its moral maxim, sometimes evil-doers really do get away with it. I’m not quite
sure that Jones gets away with so indifferently dismissing the evidence of text and score, but he does give us a lot to think about.