Notes and sounds by
Prabowo, Matthew Greenbaum, Wang Lu, and Leoš Janáček had
vibrated against our eardrums before dissolving into the air; our cups of beer
(custom-brewed by Sam Burlingame to pair with the chamber opera) had been
drained and now sat empty in our hands. These words, which Prabowo had set from
a love poem by Goenawan Mohamad, seemed to encapsulate the theme of the
evening: the intensity and inherent transience of passion, love, and
friendship—stories that are written in fire, but inevitably forgotten or
erased.

Prabowo’s chamber opera, for string quartet and two vocalists, was
composed in 2005 specially for the Momenta Quartet, the ethnomusicologist and
experimental vocalist Nyak Ina Raseuki (aka Ubiet), and a Western-style soprano
(which part was sung by Arnold in this performance). Mohamed’s text was
not carved out into set divisions but rather freely shared and vaulted between
the two vocalists. Some phrases were sung while others were spoken in a low
guttural chant. Both Ubiet and Arnold overwhelmed the intimate space and
boxed-in acoustics of the Tenri Cultural Center with sounds that seemed to defy
the limitations of the human body. The rate of their vocal exchanges
accelerated until the final two stanzas, which they sang in a silken, glossy
unison: a fitting (and exquisite) embodiment of the ephemerality of human
connection. The Momenta Quartet wended their way through extensive string
passagework during periodic interludes that were so whispery they hurt your
ears, but in a good way. 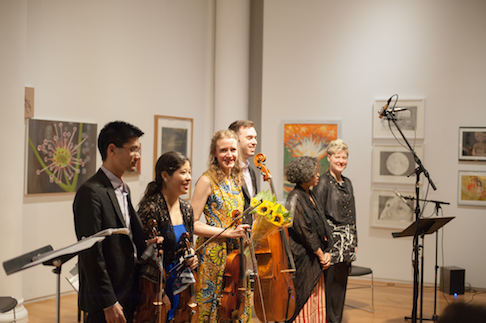 Before the opera, the Quartet had performed three works selected by violist
Stephanie Griffin. Each member of the quartet curated a night of the Festival,
with Griffin’s “Written in Fire” the only of the four to
feature a woman composer. The world première of Wang Lu’s Double
Trance, commissioned for the Festival, was an exploration of a less
straightforward, more fragmented kind of passion that felt real and honest. Its
piece was inspired by the “desperation and resignation” Lu
witnessed in a Piero della Francesca fresco on her recent travels through Rome.
Its heterogenous texture comprised of crunchy groans, plucks, strained shrieks,
tremolos, and stratospheric cello overtones. Prabowo’s imagery is full of
movement (“Sometimes I want us to fall, like butterflies falling from a
branch before the certainty of death”); Lu’s is an abstract
assemblage of frozen moments, a scattering of puzzle pieces in which one can
glimpse a beautiful whole.

More homogenous in texture was Matthew Greenbaum’s Castelnau,
a 2002 quartet which was the first piece ever written for the Quartet. The
piece felt like listening to a more distant kind of passion, or perhaps passion
through the lens of nostalgia. Phrases echoed from instrument to instrument in
overlapping shreds of sound like conversations relived obsessively in
one’s head, before eventual unisons and the long draggy chords of
forgiveness (or forgetfulness). Janáček’s Intimate
Letters of 1927–1928 fit the theme most explicitly; the quartet was
composed in the last years of the Czech composer’s life, offering a
musicalized narration of the 600 love letters he had written to his married
muse, Kamila. The quartet made me laugh on multiple occasion, from its tonal
opening (always jarring at a new music concert) to the totally loony cascading
delirium of the entire fourth movement. The soaring viola lines of the second
movement—meant to portray Janáček’s beloved—were
executed brilliantly by Griffin, who glowed all evening.