On Saturday, October 22, San Diego Opera opened its main stage season with Rossini’s comic opera, Cinderella (La Cenerentola). I saw the performance on the following Tuesday. Lindy Hume’s production had already worked it intrinsic magic in Australia, New Zealand, and Leipzig, Germany but this was its first run of performances in the United States. Hume is the artistic director of Opera Queensland in Brisbane, Australia.
Her stage direction makes use of almost every kind of comedy that can be invoked on the opera stage and she kept varying each artist’s movements so that nothing was ever repeated. If a member of the audience looked away for even a moment he missed something. Dan Potra, who designed The Barber of Seville for Houston Grand Opera created the designs for Cinderella’s scenery and costumes.
The curtain opens upon a wall of library shelves. In this version of the opera, Don Magnifico, the father of Cinderella and ugly sisters Tisbe and Clorinda, owns a general store. He and his daughters live above it. The store contains all sorts of items, both useful and imaginative. Other scenes are denoted with appropriate decor. Potra’s costumes ranged from clownish togs for Magnifico and the ugly sisters, to a red velvet suit for Dandini as the false prince and a gorgeous dark blue ball gown for soon-to-be Princess Angelina. 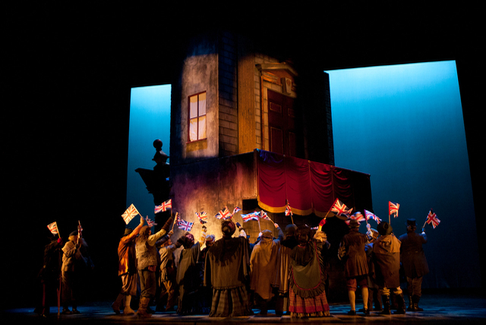 Scenic and Costume Designer, Dan Potra
For all this fun and games, Egyptian-born bass-baritone Ashraf Sewailam as the prince’s tutor, Alidoro, was the only straight man. He sang with stentorian dark tones and maintained a singular dignity throughout the evening. In many ways, the charismatic presence of this artist kept the production centered and allowed the comedy to go on around him.
Lauren McNeece was a sweet Cinderella whose sisters bullied her constantly and whose father denied her paternity. For most of the opera she sang with a sweet lyrical sound. At the finale, however, she let loose and sang her high notes with unfettered full rich tones that I never suspected she had hidden all along. As her future husband, Don Ramiro, David Portillo negotiated his difficult coloratura line with exquisite grace and delightful lyricism. Right now, the opera world is blessed with tenors who can sing coloratura and it is a joy to see them spread their wings and fly with the most complicated Rossini roles.
Susannah Biller and Alissa Anderson were the “ugly” sisters Clorinda and Tisbe. They were always amusing and they earned a few laughs with their antics. Most importantly, they were never strident, a difficult feat in those roles. Either of them could be the next Angelina. Italian bass Stefano de Peppo is a gifted commedian and a past master of the fast “patter” that many of Rossini’s comic roles demand. Already dressed for laughs, he made Magnifico real by ever-so-lightly underplaying the part.
Although Los Angeles Opera Young Artist Program alumnus JosÈ Ad·n PÈrez was already well known in Southern California, this was his San Diego Opera debut. He was a no-holds-barred Dandini who wanted Cinderella for himself. He sang with an opulent light baritone sound as he made his character realize that although he was a high level servant, he was a servant nonetheless.
Chorus Master Bruce Stasyna made his debut directing the all male ensemble who sometimes danced and at other times goose stepped as an amusing group of serving men and whiskered “women.” Gary Thor Wedow conducted the San Diego Symphony Orchestra in a well-paced translucent reading of Rossini’s elegant score. Patrons heard a multiplicity of interesting sonorities from the lower as well as the higher and brighter-sounding instruments. It was good to be back at the Civic Theatre and to realize that San Diego Opera is again on a firm footing in its community. I look forward to the chamber opera, Soldier Songs, next month and to more main stage productions in 2017.
Maria Nockin