With water-reflected light bathing the stage, Water Nymph Rusalka and her sisters “swam” sitting on the backs of chairs and waving their arms much as Russian ballerinas do in The Dying Swan.
Their world was separated from the world of humanity by a forbidding white door. Water nymphs and wood sprites wore ethereal gowns that moved gracefully with them and allowed the audience to perceive them as denizens of a different realm. Melinda Whittington was a poignant, tragic Rusalka who enchanted the audience and brought them into her world with her moon song “Mesiku na nebi hlubokem” (“O moon high up in the sky”). 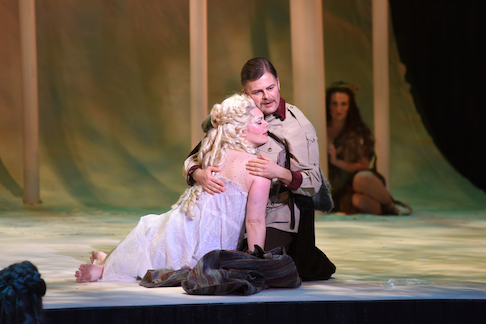 Sara Gartland and David Danholdt as Rusalka and The Prince
When Rusalka fell in love with the human Prince, her father, Vodnik, sung magnificently by Richard Paul Fink, warned her that no good could come of the match because humans are sinful. I wonder if Dvo?·k got his idea for Vodnik and the Three Wood Sprites from Wagner’s Das Rheingold. Vocally, the combination of stentorian baritone and three high lyric voices was fascinating. Daveda Karanas was a human looking Jeûibaba. With no pointed ears or other marks of an alien being, she wore a dress with a cut-out bustle that would have been quite fashionable in 1890s. She sang with dramatic vocal colors, but her characterization was rather bland.
Kevin Ray was a dramatic-voiced Prince whose character was bewildered by two women, Rusalka and the Foreign Princess, vying for his hand. Alexandra Loutsion was every inch the evil Foreign Princess and she sang with easily produced warm and resonant dramatic notes that made me wonder if she is a future Wagnerite. In this fairy tale, the Foreign Princess got the Prince’s ring and eventually shoved the social climbing water nymph back into her pond. That was a sad lesson, indeed, but one that must sometimes be learned. 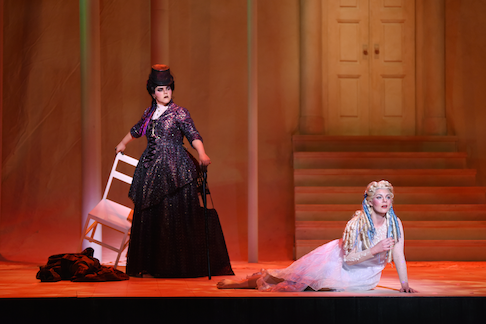 Daveda Karanas and Sara Gartland as Jeûibaba and Rusalka
Kevin Newell was a dutiful hunter, but The Gamekeeper in a scruffy wig and the cowardly but limber Kitchen Boy supplied the comic relief that kept Rusalka from being totally tragic opera. Henri Venanzi’s chorus never appeared in front of the curtain and I wondered why. He has a good group but they might have seemed too earthbound for nymphs or sprites.
Dvo?·k’s music is exquisite and Conductor Steven White presented it in all its liquid, translucent beauty. Although memorable, the moon song is not the only great piece in this opera. There are many other scenes of similar evocative lyricism. The duet between Rusalka and the Prince has been described as one of the most enchantingly nuanced in all opera. Rusalka is a work we need to hear again so that we can get to know and understand its melancholy charm. I hope it won’t be too long before a company in Arizona or Southern California again presents Rusalka. It’s well worth hearing more than once.