This spectacular musical experience by the Gewandhaus Orchestra (GO) enthralled the audience with engaging singers that included Markus Marquardt, Andreas Schager, Evgeny Nikitin, Christiane Libor, and Stefan Vinke and a superb supporting cast. This was a vocally dramatic thrill ride. If you’re a stickler for basic productions, you will be missing out on the terrific orchestra. This Ring Cycle is worth a trip to Germany.

That’s not to say there weren’t any problems. Sound effects clumsily missed their timing. Wotan didn’t catch his stagecall for Die Walküre’s Third Act, so everything needed to be stopped and restarted. But this made the communal experience all the more endearing and disarming: an intimate sharing experience of musical excellence for the audience. It was the strong cast and sublime Gewandhaus Orchestra that turned this Ring Cycle into an unforgettable experience. 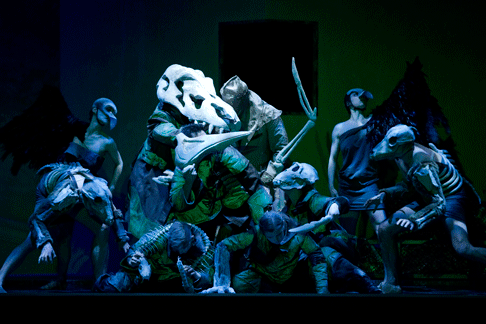 Ulf Schirmer demonstrated why the GO can count itself to best orchestras of the world. With ceaseless intensity, Schirmer elevated Wagner’s luxuriant Romantic score to superlative heights with many goosebumps and hair raising moments. With a history of Herbert Blomstedt and Riccardo Chailly as past Principal Conductors, the development of such high quality German culture is evident. Now Andris Nelsons has made the GO his orchestra together with his Boston Symphony Orchestra. Overseeing both, he plans a partnership and festival. However at the Leipzig Oper, it is Schirmer who brilliantly conducts!

Simple but at times cluttered staging

After their collaboration on Tri Sestri by Peter Eötvös, Leipzig Oper’s General Music Director Ulf Schirmer approached Rosamund Gilmore for this Ring Cycle, starting with the premiere of Das Rheingold in 2013. Even if the staging had its convoluted moments, none were deal-breaking. The simple sets allowed for intensely sung drama to occur between the performers and kept an emphasis on the music.

Gilmore’s ballet background influenced her production. Throughout, the British choreographer included baffling modern dance for the “mythical elements” of Wagner’s world. I could have done without these distracting spasms. They showed up every evening, but it was not until their appearance in Siegfried’s forest setting that they finally seemed to fit in Gilmore’s world. Though what she turned Fafner the dragon into left me a bit confused in his giant appearance. 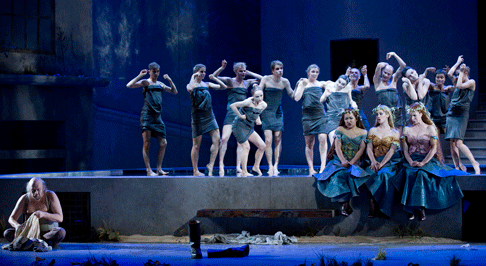 The stage involved geometrical structures and deconstructed buildings. The flashy Das Rheingold had the most interesting set: Carl Friedrich’s Oberle’s dynamically changing Escher-esque design with atmospheric lighting turned Nibelheim into a visually enflamed hell. He enriched the Rhine and the Rhinemaidens with aquatic projections.

Nicole Reichert‘s costumes added an elegant class to the gods. She made the Rhinemaidens look tantalising, and turned giants Fasolt and Fafner into convincing oafs. Her childish outfit for young Siegfried was a bit over the top, but Vinke pulled it off.

In Das Rheingold, Tuomas Pursio convinced as the young Wotan, but Karin Lovelius’ stunning vocals as Fricka overpowered him. Pursio would have an impressive vocal revanche as the manipulating Gunther in Götterdämmerung. With her eerie vocal effects, Nicole Piccolomini had scene-stealing moments as Erda, though in her gothically glamorous dress she particularly dazzled in Siegfried. Jürgen Linn as Alberich carried a devious and resentful air that made him fully dislikable. His voice filled with a dark, hateful intonation. As Mime, Dan Karlström’s impressive voice clashed with more of Gilmore’s awkward choreography. 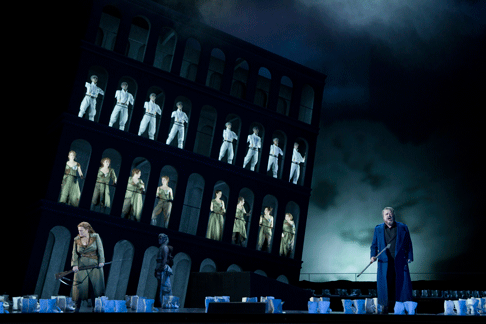 The vocal high point of the four nights was Andreas Schager’s boisterous Siegmund in his impassioned duet with Christiane Libor. Together they delivered great chemistry. With her vocal prowess, she held her own as Sieglinde. Though with his star wattage, Schager was the clear audience favorite; his curtain call led to an endless applause. Hanging on to every breath of the charismatic Schager, the young man next to me sat on the edge of his seat, equally captivated and swept away as I was, as Siegmund exclaimed his love for his sister. After Siegmund’s death, Schager’s absence left a void of glamour.

Later in Akt III, after he killed the momentum due to his missed stage cue, disrupting the thrilling energy of Schirmer’s electrifying “Flight of the Valkyries”, a commanding Markus Marquardt as Wotan made up for as much as he could in his father-daughter drama together with Eva Johansson’s Brünnhilde. Her emotion convinced, though she never quite reignited. This technical interruption resulted in a energetically challenged Third Act.

Die Walküre ruled with its thrilling female power. In Siegfried’s coming-of-age story Schirmer switched to Wagner’s testosterone drive. Bayreuth regular Stefan Vinke took a while to grow into his role as this young Siegfried. He delivered some great comedic timing on his puerile journey through the forest. He finally hit his stride in his interaction with Elisabet Strid’s sensitive Brünnhilde at the end. Their dynamic felt real and served as a disarming finale, leaving me with tears streaming down my face. 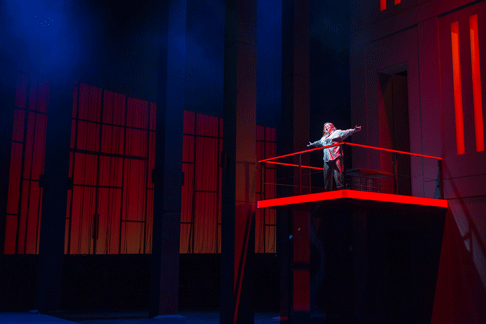 Götterdämmerung came with the stylish severity of the unhappily wealthy (here also alcoholic) siblings Gurtrune and Gunther. Wagner’s passionate interactions exploded on stage. Marika Schönberg turned Gurtrune into a hot mess, shivering in fear from Stockholm Syndrome in her relationship with her brother. Michael Reger as Hagen served showstopping moments.

But on this last night, it was Christiane Libor’s time to shine. She commanded the spotlight as she owned the role of Brünnhilde. Full of passion and despair, she captivated me with her convincing emotion and powerful voice. Mindblowing!

On these four consecutive evenings, Ulf Schirmer demonstrated conducting skills through his professorial discipline enriched by his deep passion and academic expertise. Every night, he kept a thrilling momentum going. Time became meaningless.

With “Siegfried’s Rhine Journey” and the “Funeral March” as monumental highlights, Schirmer produced the GO’s distinguished brilliance and electrifying depth. A crisp sound, lush textures, and an elucidating transparency kept the listener fully intoxicated. Even after the music ended it kept on going in my head. In fact, it was one of those rare life affirming musical experiences.

What more can I say to convince you to visit this Ring Cycle? After the invigorating Vorabend in the early evening, a hilarious scene occurred. Andris Nelsons and the Boston Symphony Orchestra made their debut at the Gewandhaus Hall right across from the Oper Leipzig. So after two and half hours of Wagner, a mass of music fanatics hurried across to be on time for Mahler’s Ninth Symphony. Such concentrated quality programming is not uncommon in the highly cultural Leipzig.