Inventive stage director Layna Chianakas cleverly started the homage to The Rabbit of Seville early on and carried the hijinks throughout the performance. As the orchestra launched into the jaunty up-tempo repeated chords of the overture, suddenly a silhouette of an enormous carrot appeared as a projection on the grand curtain, traveled across the front of it, and disappeared. Before you wondered if you could believe your eyes, another one appeared from the opposite side and did the same.

By then, we got it. The laughter and applause as we recognized the reference nearly drowned out the merry music-making in the pit (a taut, idiomatic reading led by Andrew Whitfield). The overture was “staged” with carrots dancing, parading and moving into positions suggesting the crossed swords of a family crest. With this cheeky beginning, the tone was set for a no holds barred romp. 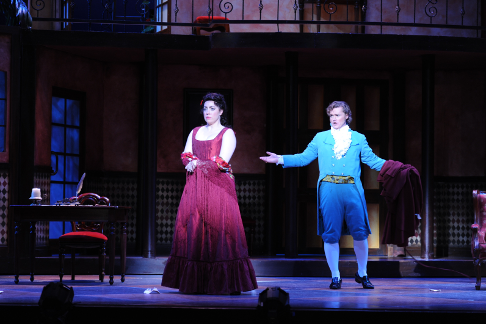 The Count and Rosina

Babatunde Akinboboye put his polished baritone on ample display as a winning Fiorello, serving immediate notice that the standard of the afternoon’s singing would match the ingenuity of the staging, and then some. Maestro Whitfield is also the Chorus Master and the men’s ensemble belied their disparate and ragtag look by offering meticulous harmonizing. We are all waiting Figaro’s signature entrance, of course, to experience one of the most familiar arias in all of operadom.

Brian James Myer delivered a true star turn in the title role. Factotum is too puny a word to describe Mr. Myer’s (dare I say ‘definitive’?) performance. I cannot recall encountering anyone in my many years of seeing this piece who exhibited anywhere near such a total command of the role, the style, the joyous abandon. His arsenal included an effortless stage demeanor, a thoroughly considered subtext, flawless comic timing, and a tirelessly wiry presence.

Brian’s evenly produced, appealing baritone may not be in the burly Milnes or Mattei vein, but it has plenty of ping and sass, with a warmly ingratiating tone that fills the house. Figaro is Brian James Myer’s first role assumption as a Resident Artist, and Opera San Jose can be very proud of their superlative choice in adding such a fine young talent to their roster. Nor was he alone in his accomplishments. 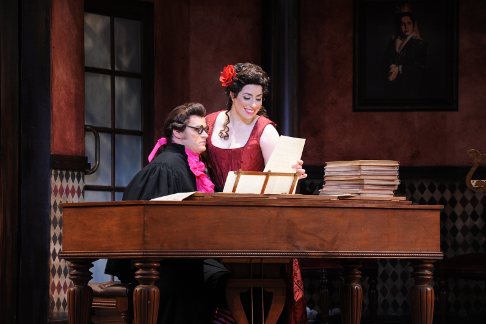 The OSJ talent roster has a deep bench and the remarkably versatile tenor Kirk Dougherty turned in another treasurable performance as Count Almaviva. Mr. Dougherty once again regales us with a honeyed voice that is pliable, beautifully produced, and consistently responsive. His forays into the upper reaches of the role are as comfortably negotiated as the characterful melismas.

The Count has several comic guises in this piece to be sure, and Kirk keeps his tone freely produced even as he colors it to suggest less aristocratic denizens of Seville. His beautifully delivered serenade benefitted from his skill at providing his own guitar accompaniment, a singular feat. Like his titular costar, he established his comic credentials early on, and the expository Figaro-Almaviva duet crackled with witty Rossinian interplay.

The radiant mezzo Renée Rapier immediately engaged our ears with a plush, ripe tonal beauty that announced her as a major discovery. In short order, she also captured our hearts with an especially assured Una voce poco fa. Her fresh, spontaneous reading of this thrice-familiar piece immediately established her credentials as a first tier Rosina. Ms. Rapier’s rich lower register was wedded to a solid middle and brilliant top, giving off coloratura sparks as demanded, and coy romantic heat when appropriate. 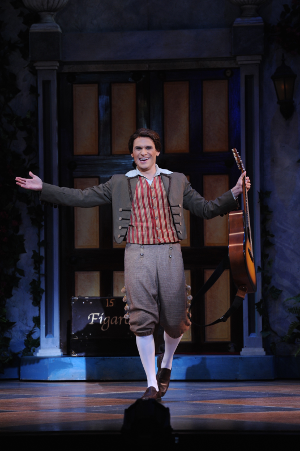 She, too, proved to be a well-rounded, richly complicated personality, and she found a variety of meaningful expression in her impersonation. Her comic sensibilities were a formidable component in the day’s success, and she clearly relished interacting and conspiring with her Figaro and Lindoro. Even though I knew it was coming, her spot on revelation that she has already written the love note that Figaro is prompting her to compose was so “right” that I barked a surprised laugh out loud. This cast was treating the audience to Barbiere as if for the first time, and we relished their sense of discovery.

The oily Music Master Basilio was well-served by the wonderfully suave basso voice of another Young Artist, Colin Ramsey. Allowing him to be honestly, unabashedly youthful was an inspired choice, and no comedy was lost by showcasing Mr. Ramsey’s gorgeously rolling tones, with their vibrant young sheen. A solidly delivered La calunnia has rarely been as pleasingly voiced, yet with all the necessary sinuous underpinnings.

Considering that Valerian Ruminski was undertaking the challenging part of Bartolo for the first time, he revealed much in his depiction of the devious curmudgeon. Mr. Ruminski has a smooth, orotund baritone, perhaps a bit too smooth for this volatile character. His was not (yet?) in the tradition of bloviating, blustering practitioners, but is a little (too?) smooth around the edges. His difficult rapid-fire patter was not always as precise as it may become. Still, his persona and physical stature are ideal for the role and he proved a competent player in the twisting plot. His outlandishly comic, brazenly mis-tuned aria in the Lesson Scene was alone worth the price of admission.

It would be hard to imagine a more committed and scene-stealing Berta than that embodied by the vivacious Teressa Foss. Too often this can be a throw-away part, but Ms. Foss played a deliciously willing accomplice in Rosina’s detention, with an apparent girly fixation on carrying stuffed animals, which increased in obsessive number as the show progressed. Teressa is also possessed of a laser-focused whiz-bang of a soprano voice, and her effortless flights above the staff were as admirable as they were totally unexpected. In the small role of the Sergeant, Sidney Ragland made every phrase count with a secure delivery 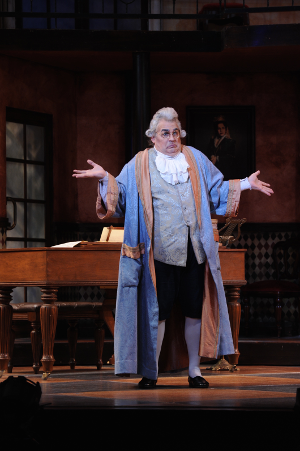 The physical production was all that could be wished. Matthew Antaky designed an unfussy, practical, attractive set that afforded plenty of opportunities for varied blocking, effective levels, and even a few surprises. The colorful exterior for the opening was wonderfully dressed with palm trees, profusions of flowers, Mediterranean tiles and a fountain. That gave way to a two-level interior with enough doors for a decent Feydeau farce.

Alyssa Oania is credited as being costume coordinator, which may mean she carefully selected the good-looking attire from stock. But Rosina’s well-styled burgundy dress and Spanish shawl seemed far too fetching not to have been created specifically for her, and Basilio’s accessories (including eyewear resembling designer goggles, prissy white hanky, fuschia jabot and matching striped socks) were brilliant touches. And were brilliantly copied for Almaviva’s phony teacher in Act Two.

A highly effective wig and make-up design complemented the dress, with Christina Martin providing excellent support. The gag of having Figaro distractedly tease Bartolo’s wig, not having realized the good Doctor has vacated it, was a memorable visual. And Basilio’s heavily made up doe eyes and high cheekbones made him look eerily like Lily Tomlin in drag. The bobbling, wobbling mustache for Almaviva’s drunken soldier was also a comic plus.

Kent Dorsey achieved a good deal with his diverse lighting design. In addition to even area washes and atmospheric gobos, Mr. Dorsey programmed a number of specialty spots that were helpful in creating a rhythm to the look and flow of the show. He alternated blackouts with spotlighting Figaro during his entrance aria, contributing to the cartoon-like sensibility that permeated the concept. Only the colored disco light effect at the end seemed slightly out of sync. 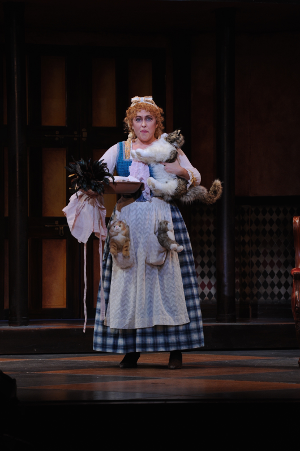 With all the key casting and technical positions filled with consummate professionals, it was arguably Maestro Whitfield and Director Chianakas who were the icing on the cake. Or the maple glaze on the carrots. Whitfield helmed a talented collective of solid strings, colorful winds, and punctuating brass that unified into an effective Rossinian arc. And Ms. Chianakas drew out richly detailed interplay onstage that was chockfull of revelatory ideas.

The uninhibited clowning by the choristers at the top, including some balletic goofs, was infectious and conveyed an expectation of what would follow. This included a dizzy moment with the Count and the Barber freezing as “statues” in the fountain to avoid detection by Bartolo, who is exiting his house. The removal of the ladder by some unseen force in the climactic scene was perfectly timed. I am not sure that Mr. Myer’s masterful Figaro needed help putting across his aria by the addition of three chorus girls extras sporting huge wigs studded with salon accouterments, but I appreciate the thought.

A far better thought was turning the storm into a psychological tempest, in which a dreaming Rosina presents a love letter to each of the other principals, then thinks better of it and tears the missives up one by one before returning to her sleep on the settee. A well-considered, serious moment in all the jollity.

But it was not long before those danged carrots were back with us, as a running gag that paid good dividends. Whether being played as musical instruments, tossed about the stage, or God knows what else, those orange veggies always brought us back to the source of this production’s comic inspiration.

So, what’s up Doc? A witty, slapstick celebration of an in-joke that was always characterized by well-calculated physical and intellectual humor, and married to an admirably first tier musical execution. In short, another solid achievement by the resourceful Opera San Jose.