Holten’s vision turns out a facilitating
backdrop to put Wagner’s musical cosmos on a pedestal. From the Orchestra
of the DOB, Alex Kober coaxed an electrifying momentum burning with brilliance
in the musical details of Wagner’s early masterpiece. The evening flew
by.

Act I opens with a shooting star on the hanging backdrop. The meandering fog
making its way lowly across the stage during the slow-burning, lusciously misty
Overture, evoked my memory of the cloak of morning fog covering Lake Lucerne
during my Swiss adventure to Tribschen, where Wagner composed
Lohengrin around 1850. I can’t imagine a better way to open this
opera. And this was just the beginning.

Annette Dasch conquered the audience with her stunning portrayal of Elsa von
Brabant. She captivated from the moment she appeared on stage. Dasch endowed
Elsa with a chastity and devotion, which she reflected with ferocious virtue in
her voice. She equally convinced in her growing panic and doubt concerning the
true name of her savior and husband, Lohengrin.

In Act II, the slim beams with green light vertically erected on stage, I
associated with the Northern Lights, from where, I imagined, Ortrud drew her
powers. Elisabete Matos sang sinisterly brooding and highly vindictive. Her
voice resonated all the envy Ortrud requires. Matos proved a scene stealer as
Ortrud manipulated Telramund into her scheme to seed doubt in Elsa about
Lohengrin’s origin. An intimidating and threatening tone permeated
Wolfgang Koch’s angerful Telramund. 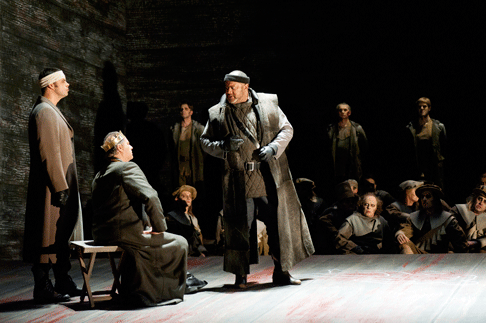 The light and darkness, Elsa’s innocent virtue and Ortrud’s
jealousy and cunning, could not have been more strongly reflected than in the
contrasting timbres of Dasch and Matos.

Dasch proved a riveting actress on all fronts. Rich in sound, convincingly
emotional, and absolutely glamourous. What a voice! What great acting! I was
absolutely enamoured by her.

Slightly superheroic with swan (or angel?) wings on his back, Peter Seiffert
put on an honourable and warmhearted Lohengrin. Jesper Kongshaug’s
lighting and smoking effects added explosive dramatic energy during
Seiffert’s showstopping first appearance as Lohengrin…but no swan to be
seen except for the wings on his back.

In the Third Act when he reveals he is Parsifal’s son, Lohengrin
radiated nobly, almost saintly. Is Holten’s Lohengrin an angel as well?
Yet even with his divine voice, Seiffert could not compete with Dasch’s
starpower. Still, above all, their synergy surged in romance and despair during
their wedding night duet.

Holten’s ideas had some drawbacks. Gottfried’s role felt
absently unexamined. At the front of the stage, his body was outlined as if at
a modern crime scene. At the end, Ortrud redrew the lines emphatically
provocative. It served as a continual reminder of Gottfried’s death.

After the glorious Bridal Chorus, during the wedding night, Holten’s
strange inclusion of a one-person wedding bed with one pillow, that turned out
to be Gottfried’s coffin covered by a white sheet with the corpse of
Gottfried. In an unforeseen twist Holten seems to suggest that Ortrud was
right. Elsa killed Gottfried? So there was no swan? Is Lohengrin then an
angel? 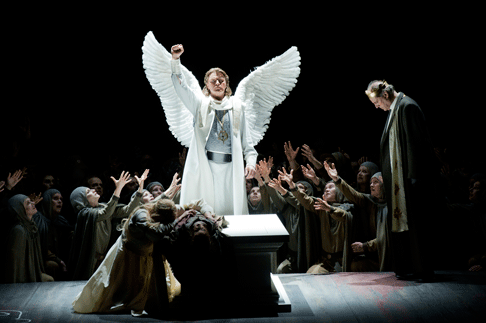 Whatever these mysteries for interpretation, they certainly didn’t
impede any of the musical drama.

In two last minute replacements, Günther Groissböck sang with a
majesty that seemed to be emanating from every fibre of his body. His dashing
and virtuous demeanor made for an excellent King Heinrich. Equally impressive
as substitute was Markus Brück as Announcer of the King. However brief his
moments, Brück owned the stage with his grounded voice as if he was the
actual lead character.

With Alex Kober, the Orchestra of the DOB’s luscious strings carried
on Wagner’s fast-paced drive. From the balconies or from high up in the
wings, the brilliance from the brass and pulsating percussion resonated in
Wagner’s majestic passages, providing spectacular moments in Act III.

In addition, under Kober the solos flashed, more so than in the powerful and
thickened texture of Runnicles’s Parsifal. Then again,
Lohengrin has the lighter touch of a younger Richard, whereas his last
opera has a much consuming score. Runnicles optimized the power of
Parsifal’s length that forces the listener to travel deeper into
Wagner’s intoxicating musical cosmos.

This was just the DOB in the Fall. If you at their programming this spring,
they cast the best Wagner singers (including, Herlitzius and Westbroek) for the
final two performances of its current production of Ring Cycle in April. You
can still catch in this Lohengrin in February.

While for the newcomers, a visit to Tannhäuser or Der
fliegende Holländer should be a highly encouraging introduction to
Wagner’s world.

If you can’t make it to Bayreuth, when it comes to frequent and
consistent Wagnerian vocal extravagance, the Deutsche Oper is the place to be
in Berlin.