Donald Runnicles led Parsifal, and Alex Kober took care of
Lohengrin. The stagings were not by the same director nor in any way
connected. Still, it felt pleasantly familiar to return to DOB with the rich
sound of the orchestra and the superior singers musically connecting the
connections of Wagner’s father and son mythology. I preferred Holten’s Lohengrin straightforward staging rather than Stölzl’s convoluted, though intellectually stimulating, madness in Parsifal. The shortcomings or excesses on stage barely mattered
against the superlative musical experience.

Was Stölzl trying to approach
Wagner’s Parsifal with a tongue-in-cheek angle? Klaus
Florian Vogt, dressed like John Travolta in Quentin
Tarantino’s Pulp Fiction, seemed to be on a hallucinatory
experience through space and time. Kathi Maurer’s anachronistic, yet
stylish, black suit made this Parsifal totally out of place in
Stölzl’s historical settings. 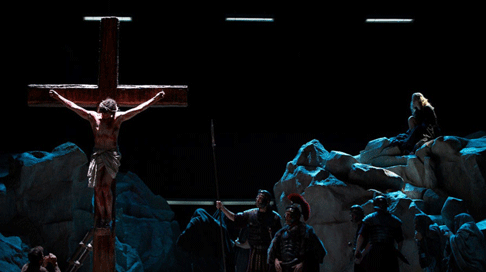 In Act I, Parsifal ends up at Jesus’s Crucifixion. At first I thought
Kundry might have doubled for Mary Magdalene, but then her laughter confused
me. And were the Knights of the Grail here Crusaders?

The dying Amfortas was accompanied by a dimly lit stage. Stumbling on Mount
Golgotha as if he jumped out of a time warp, Vogt’s lithe tenor voice
brightened up the stage that, together with Ulrich Niepel’s mood altering
lighting, effectively purified the gruesome biblical scene. The profoundly
impressive Choirs of the DOB closed Act I, and made up for Stölzl’s
taxing affairs on stage.

In the Second Act, we move on to Aztec times, where Klingsor appears to be
Chief of the tribe. We get another human sacrifice. Here the electrifying
Flower Maidens turn out to be cannibals after Parsifal. Kundry with her scream
saves Parsifal. He kills Klingsor with the spear. By now I had given up on
disentangling Stölzl’s historical superimpositions on Wagner’s
cosmos. I let myself just be swept away in Runnicles’s blissful momentum
of Wagnerian opium. 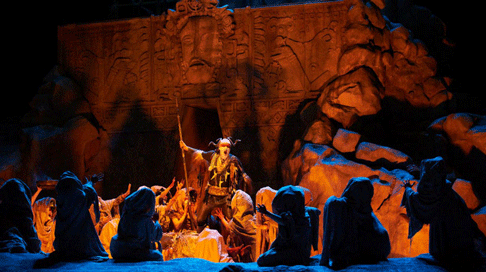 Vogt appears late in Act I, which really belonged to Thomas Johannes
Meyer’s regally sung Amfortas and Daniela Sindram’s Kundry. But
when Vogt appeared he sang with his famous lyricism. His voice melted
beautifully into Runnicles’s rich texture. He moved me to tears, basking
in the glow of the DOB Orchestra, in his finale song about the spear.

Daniele Sindram dosed Kundry with the perfect amount of frenzy without any
overacting. In Act II in her interactions with Parsifal, she moved impressively
from the motherly care to the seductive attempts as lover. A commanding
presence, Sindram generated captivating chemistry with Vogt.

Andrew Harris’s old Titurel walked with shaky fragility, but he sang
with with noble strength. Derek Walton’s flamboyant Klingsor brought enough
creepy ambiguity for his sexless character. The rest of the supporting cast
sang pretty much flawlessly adding to the glorious vocal experience.

The specific religious scenery of Stölzl’s production does
undercut Wagner’s already complex mythology. But with first class
singers, Stölzl’s changes (to some perhaps heretical) are quickly
forgiven. Most of all, the Orchestra of the DOB reflected Principal Conductor
Runnicles’s mastery of Wagner’s work.