On February 18, 2017, Los Angele Opera presented Richard Strauss’s Salome backed by a set originally designed by John Bury for Peter Hall’s 1986 production at the Music Center. Its newly refurbished version directed by David Paul featured a dark platform that held the necessary cistern. The sky was filled with clouds surrounding a pale moon that crept almost imperceptibly across the sky during the course of the opera. Sara Jean Tosetti’s costumes encased Salome in layers of jewel-toned chiffon, wrapped Herod and Herodias in bright brocades and clothed the soldiers in stiff, braid-trimmed jackets and skirts. 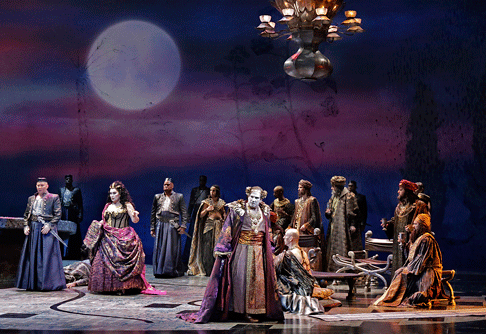 Allan Glassman (center front) as Herod, with Gabriele Schnaut (second from left) as Herodias [Photo by Larry Ho / LA Opera]
Issachah Savage, a promising young dramatic tenor, sang Narraboth’s lines with shining bronze tones. Reports of his Otello in Mexico make him a tenor to watch. As the Page, Katarzyna Sadej sang with a sweet sound that could barely be heard over the eighty-four-piece orchestra. TÛmas TÛmasson was a rough and rugged Jokanaan, physically and vocally. Unfortunately, he seemed to lack any semblance of romanticism that might have made him attractive to the teenage princess. Other cast members who added measurably to the value of this performance were: Nicholas Brownlee as the First Soldier and Kihun Yoon as the First Nazarene. Rodell Rosel, Josh Wheeker, Brian Michael Moore, Carlos Enrique Santelli, and Gabriel Vamvulecu were most energetic as the Five Jews.
Patricia Racette’s Salome is an impetuous teenage princess who interrupts the royal routine on a cloudy night by demanding to see her stepfather’s famous prisoner. Racette’s interpretation makes her Salome younger than the characters portrayed by many of her famous colleagues of the past. This princess plays mental games with Jochanaan and with Herod. Later, she plays a physical game with the gruesome, natural-looking head of the prophet. Having grown from lyric to dramatic status by way of Puccini and Verdi rather then Wagner, Racette’s voice has a different sound for Strauss than the ones we heard from Nilsson, Rysanek, or Mattila. Great Salomes can also come from the Italian dramatic tradition and Racette isn’t just a sex kitten. She has the dramatic vocal ability to surmount Strauss’s huge orchestra and project her silver-toned soprano throughout a huge hall. 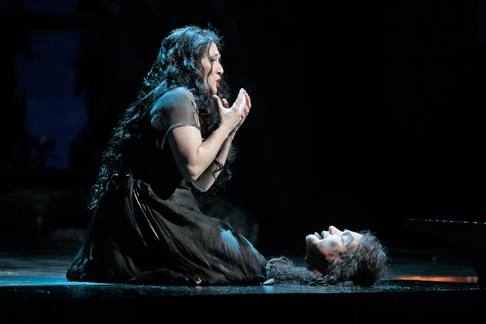 Patricia Racette as Salome [Photo by Ken Howard / LA Opera]
Her character managed to tantalize Herod who was sure she could be satisfied with a large jewel or, at most, a small province to rule. Racette danced Peggy Hickey’s intricate, rhythmic choreography with four bare chested male dancers who lifted her on to their shoulders as she released veils. When they put her down, she snatched a cover from the prompter’s box and wrapped it around her body after the few seconds of its complete revelation.
As Herod, veteran tenor Allan Glassman was a most credible politician who wanted to be on the winning side of the religious debacle. Gabriele Schnaut was an officious, self-serving Herodias who did not intend to lose her position to anyone. When Herodias took the ring from Herod’s hand and relayed it to the executioner, the tetrarch momentarily lost his power. Salome had won for the few minutes she used to cavort with the head and sing her monumental Final Scene. Racette sang all the highs with lustrous tones and connected artistically with the score’s most difficult lows.
The most important aspect of the opera Salome is its huge orchestra and Richard Strauss’s opulent orchestration. One of the main reasons for attending Salome at Los Angeles Opera is James Conlon’s conducting. He brought out the composer’s leitmotifs and his symbolic use of musical color while engulfing listeners in the score’s unusual modulations, chromaticism, extended tonality, and tonal ambiguity. Best of all, Conlon did it without ever covering any of the principal singers. Salome will be at the Dorothy Chandler Pavilion through March 19. If you are in the Los Angeles area you don’t want to miss it.
Maria Nockin