At seven PM, workers of every description were hooking lights up to a borrowed generator, running out for gasoline, arranging the setting on the specially built thrust stage, and putting hors d’oeuvres on patrons’ tables. Although the orchestra was behind the stage and there were no working monitors for the singers, shortly after eight o’clock the performance began.
Director Josh Shaw wrote: “The generator was noisy and it ran out of gas just a few minutes in. Before I could even get outside to refill it, the audience was lighting the stage with their cell phones. We carried on from there without a hitch and even decided to tempt fate and turn off the generator for Kyle Patterson’s ‘Una furtiva lagrima,’ lighting him only with a few flashlights. It was magical. And the show ended without a blackout, but it didn’t matter because the crowd was on its feet before the cast could even begin bows.”
Shaw’s bright, shiny red and white set placed the story in a smart 1950s diner where teenagers gathered and happily sipped sodas. His direction was full of edgy visual comedy that required no explanation and his surtitles translation told the story in the fifties slang of an Italian-American neighborhood. 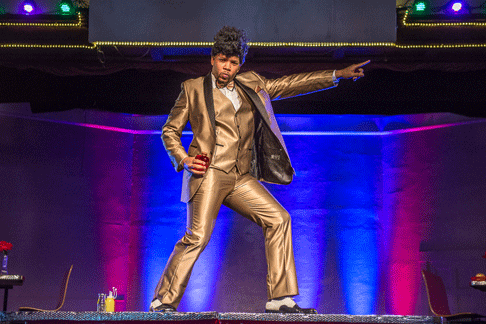 Rocky Sellers as Dulcamara
Tenor Kyle Patteron was Nemorino, the good hearted, but short and pudgy soda jerk who loved the svelte, sophisticated village beauty. His goofy smile and easy physicality made him loveable, while his heartrending aria told the story not only of his character’s situation but also of this wonderfully exciting performance. As Adina, secure and stately soprano Amanda Kingston embodied all the attributes of a village belle, but she eventually recognized that her behavior might make her marry the wrong man. The possessor of a large and lustrous voice, she sang of the ‘Cruel Isolda’ with silvery tones.
Tall and lanky Andrew Potter was the conceited army recruiter, Belcore, who thought he was God’s gift to women. With his huge, all-encompassing bass voice and precise comic timing he nearly stole the show. Adina’s friend Gianetta, sung with gusto by Jenna Friedman, might have made him a loving wife, but he literally threw her over before stalking off to his next assignment. 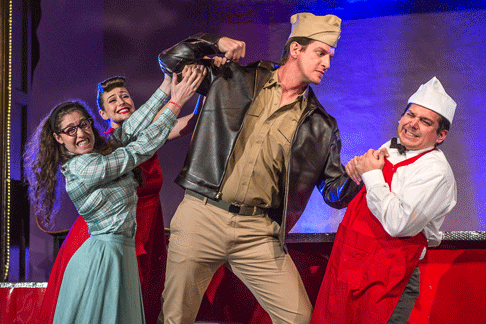 Amanda Kingston as Adina, Andrew Potter as Belcore, Kyle Patteron as Nemorino, Jenna Friedman as Gianetta
Energetic bass, Rocky Sellers, was a doo-wop styled Dulcamara who disdained the finer points of literature but knew how to conn his mark, Nemorino, out of his last penny. Although Sellers currently lacks the experience and musical precision of Potter, he has an enormous talent for comedy that we can expect to enjoy for many years to come.
Conductor Nicholas Gilmore cut Donizetti’s score down to a ten-player extravaganza. It featured four string players along with flute, oboe, bassoon, and an occasionally overbearing trumpet. Gilmore’s light, airy but propulsive reading of the score captured both its comedy and its underlying sentiment.
Maria Nockin

All photos by Martha Benedict