Only the frieze above the stage is said to remain of the original theater.
While the current theater does not have a pit of sufficient size to host full-scale Romantic orchestras (to compensate harps and percussion instruments are placed in the baignoires (boxes stage level) over the pit often resulting in bizarre acoustics. At the same time this opera house boasts an amazing stage/spectator rapport that may be unequalled anywhere in the world — words flowing from the stage are clearly audible with no loss of the clarity and volume of orchestral sound. This theater like no other offers the possibility of achieving the epitome of the operatic ideal.
There were fortunately a few splendid moments to be savored in the recent production of Mussorgsky’s 1969 (first version) Boris Godunov, notably the sly Boyar Shuisky fueling Boris’ fears with his description of the dead Dimitri, the old monk Pimen’s recounting of the miracle at Dimitri’s tomb (a blind man praying recovered his sight), and finally Boris admonitions to his son Feodor to rule justly, delivered in his dying breaths.
These moments occurred in the few, very few periods when the frenetic movement on the stage relaxed somewhat, when storytelling phobia quieted a bit, when the singers could remain still long enough to expound the Pushkin story in the glories of the play of Russian phonemes.
Italian conductor Paolo Arrivabeni well supported these successful soliloquies in a somewhat restrained reading of the score. Perhaps he was attempting to mitigate the scenic hyperventilation.
Marseille fielded a respectable cast to tell Mussorgsky’s story, most notably the Boris of Russian bass Alexey Tikhomirov who had replaced Ruggiero Raimondi in this same production from LiËge in 2010. Mr. Tikhomirov is of imposing stature and imposing voice. He finds much subtlety in the Boris personage, and as well assumes much of the stature needed to illuminate such a conflicted ruler. Tenor Luca Lombardo brought a blatantly evil spirit into his character portrayal of Shuisky. Of the principles 44 year-old French bass Nicolas Courjal made the most effect as the old monk Pimen, illuminating the Boris/Dimitri mysteries in a beautiful and clear tonal language that filled the theater.

Nicolas Courjal as Pimen, Jean-Pierre Furlan as Gregory
Mezzo Marie-Ange Todorovitch did double duty as the innkeeper and the Boris children’s nurse, both roles delivered with pleasurable linguistic gusto. Soprano Ludivine Bombert made beautiful sounds in her laments as Boris’ daughter Xenia. Bass Wenwei Zhang enacted a splendid Varlaam, the drunken friar.
More problematic were the roles of Boris’ son Feodor, nicely sung by diminutive mezzo Caroline Meng. For the role to achieve its full and intended effect it must be sung by a young boy. Tenor Jean-Pierre Furlan embodied a ribald, ambitious, rough-voiced Grigory — a nervous wreck. This Grigory was definitely not a subtle schemer who you might believe could rally revolutionary forces. The Innocent, sung by tenor Christophe Berry, was in strident tone and grotesquely staged body movements. 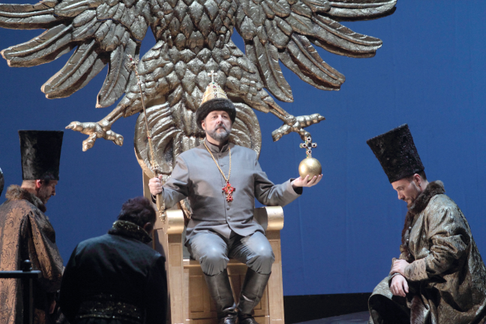 Dimitri, Czar of Russia 1605-1606, the final image of the Ionesco production of the 1869 Boris Godunov
Stage director and designer Petrika Ionesco deconstructed a Russian Orthodox fresco into George Braque-like, i.e. cubistic shapes, adding solid blocks of colored lights in open places. Scene changes were long, noisy and off-putting in this two and one-half hour sitting (no intermission). Evidently Mr. Ionesco was taken by the intense poses he found in Russian frescos, poses that he induced his actors and the chorus to imitate. This came across as blatantly naive, caricatured acting in incessant movement. It was laughable until it became unwatchable.
Michael Milenski