Silvio Stampiglia’s libretto contains the requisite amorous knots endured
by classical kings and queens. Partenope, the founding Queen of Naples, is
courted by three royal lovers: Arsace, Prince of Corinth, who is first in
line for Partenope’s affections; the affectatious Armindo, Prince of
Rhodes; and Emilio, Prince of Cumae, who, spurned by the Queen, determines
to make war not love. Arsace’s abandoned fiancÈe, Rosmira, disguises
herself as Eurimene in order to pursue her betrayer, and becomes
Partenope’s fourth suitor. 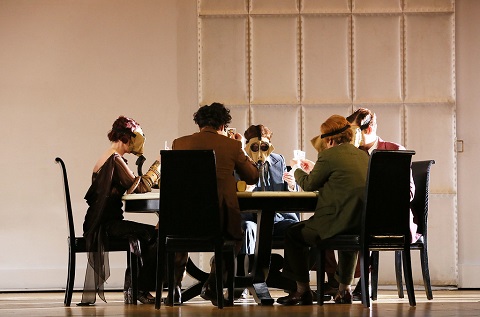 Director Christopher Alden largely ignores the historic context and plumps
instead for ‘Partenope the sailor-serenading siren’ who, so the myth goes,
cast ashore on the Neapolitan coast after throwing herself into the sea in
her despair at not having been able to sing Ulysses to his death. Alden and
his excellent design team – Andrew Lieberman (set), Jon Morrell (costume),
Adam Silverman (lighting) – set the action in a Parisian salon of the 1920s
at the height of Surrealism. Ironically, ‘Partenope’ means ‘virgin’ in
Greek, for it’s the bedroom which is the battleground here.

The Surrealists sought to overthrow society’s ‘rules’ and demolish its
reliance on ‘rational thought’. Their philosophy – as summed up by
artist-at-the-helm, AndrÈ Breton – might seem potentially risky for a
director seeking to untangle the libretto and offer a credible context:
‘thought expressed in the absence of any control exerted by reason, and
outside all moral and aesthetic considerations.’

Tapping the subconscious and liberating the creative power of the
unconscious mind could prove profitable though. Alden turns Partenope into
Nancy Cunard, in whose art deco apartment various artists gather to drink,
play cards, tap dance, twirl batons, distastefully prat about with gas
marks and bayonets, graffiti the pristine white walls with
Matisse-squiggles and lewd symbols, and pay ardent homage to their hostess.
A spectacular sweeping staircase is a death-trap to the inebriated, and if
the hedonists don’t slip on the banana skins that are literally thrown
around the stage then there’s the risk of getting locked in the lavatory
(toilets dominate the second Act, complementing the smutty colloquialisms
of Amanda Holden’s translation). By Act 3, the sharp suits of Act 1 have
been abandoned for pyjamas and various states-of-undress.

Emilio is now photographer Man Ray. I presume that the photographs that he
obsessively snaps – of artfully piled bodies and kinky indulgences – are
designed to ‘expose’ the protagonists to reality. In Act 3 Emilio climbs a
ladder and slowly assembles a collage-mural: what starts off looking like a
monochrome of Matisse’s ‘The Snail’ is revealed as Man Ray’s 1934 ‘Nude
Bent Forward’.

The design is certainly chic and Silverman’s chameleon-like lighting is
superbly evocative. But, there’s no clear raison d’Ítre. Handel’s
humour is underpinned by honesty: even Partenope’s desire is sincere, if
itinerant, and Armindo values fidelity – as he sings (in Holden’s words),
in ‘Nobil core, che ben ama’: ‘Faithful lovers wisely ponder/ that if fancy
never wanders,/ they’ll achieve a life sublime./ Constancy’s a thing to
cherish;/ truthful love need never perish/ e’en until the end of time.’

Alden’s concept is not true to such avowals. His is a world of artifice:
sophisticated but superficial. There’s a lack of emotional engagement
between his characters, and twixt them and us: we simply don’t care about
their urbane game-playing. 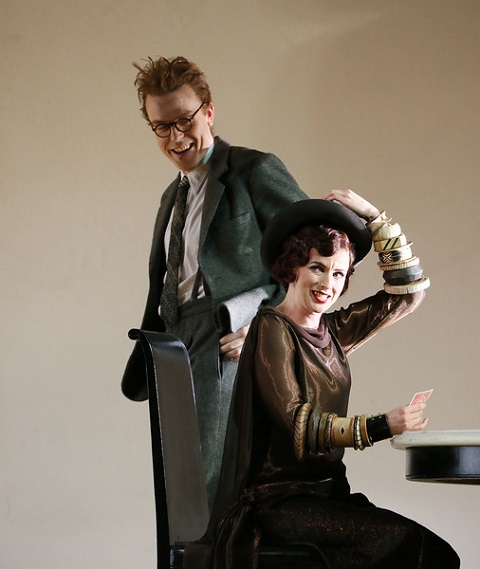 But, the superb performances of the ENO cast offer a compensating allure.
As the eponymous Queen, Sarah Tynan poses and struts, preens and sings with
classy aplomb: whether sporting the jangling bangles of a trouser-suited
Nancy Cunard, or the natty top hat and tails of Marlene Dietrich, Tynan
convey’s Partenope’s Amazonian self-belief and spirited sensuality: she’s
in love with Love. Her soprano is quite light, but flexible and clear,
sparkling but never hard-edged. After a slightly hesitant opening aria
(conductor Christian Curnyn pushes the pace throughout) she crafted the
phrases with style and hit the hemi-demi-semi-quavers with panache – even
when asked to stoke an old stove during the florid ‘Qual farfalletta’ (Act
2) to imitate the flaming passion of Cupid about whom she sings.

Given that this opera requires its cast to sing their arias dangling from
staircases, balancing astride toilet seats and while climbing ladders, it
seems sadly ironic that tenor Robert Murray was forced to withdraw from the
role of Emilia following a fall which left him with severe concussion (of
course, we wish Murray a swift recovery). Rupert Charlesworth was an
admirable last-minute replacement: his firm tenor raged and ranted with
indignant wrath in ‘Barabaro Fato si’ – an extravagant diatribe against
fate – when he found himself imprisoned in Partenope’s toilet. 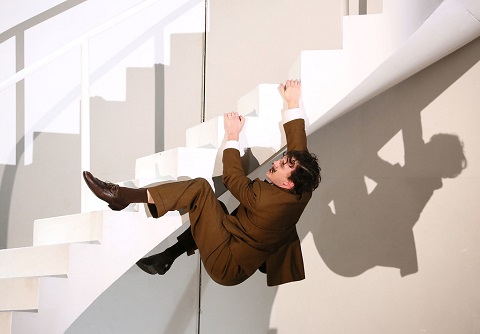 As Armindo, James Laing survived the Chaplin-esque clowning required of him
without physical or vocal mishap – ‘Volio dire al mio tesoro’ was sung
while swinging perilously from the curving staircase. Laing was rewarded
for enduring the ‘funny business’: Armindo gets his girl in the end. 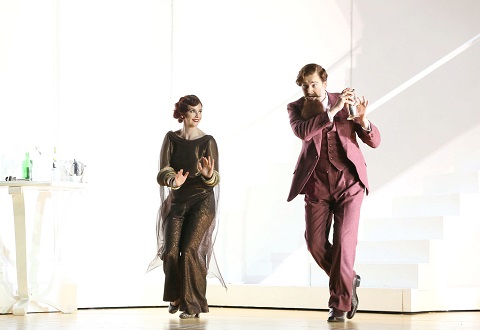 It was Patricia Bardon, though, as the pompous chancer Arsace, who stole
the show. During the first run of the production in 2008, Bardon sang
Rosmira; here she was a lustrous Arsace whose humiliation and sorrow were
heartbreakingly conveyed in the slow, affecting ‘Ch’io parta? SÏ
crudele’ (Act 3). 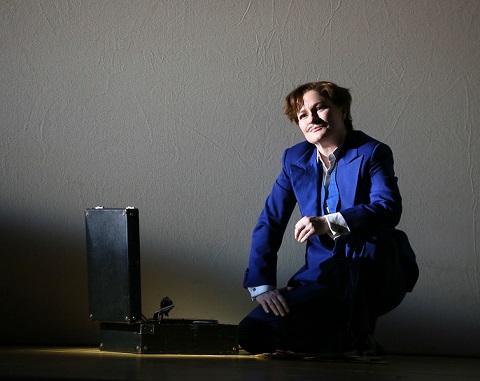 Charles Burney judged Partenope to be ‘among the best of Handel’s
dramatic productions’ and on the evidence of the score and the singing
enjoyed here it’s hard not to agree. But, while Alden gives us luxury,
lightness and louche-ness, the pleasures and pains of love – something of CosÏ’s paradoxes? – are replaced by a Surrealist dream which
doesn’t quite satisfy.