Le Couronnement de PoppÈe
Klaus Michael Gr¸ber’s production of L’incoronazione di Poppea comes from the Aix Festival of 2000. The design was by visual artist/painter Gilles Aillaud (1928-2005), Gr¸ber’s frequent collaborator at West Berlin’s Schaub¸hne (and opera houses in Berlin and elsewhere). It was a prestigious cast, Grenoble’s Les Musiciens du Louvre in the pit with Marc Minkowski.
I remember being bored, very bored. For me, then, there was no hint of mythic-in-the-making.
Just now in Lyon’s 870 seat ThÈ‚tre National Populaire it indeed became mythic, brought there not solely by messieurs Gruber and Aillaud, but also and possibly because of the Les Nouveaux CaractËres (a French early music ensemble) and principally its conductor SÈbastien d’HÈrin, and the fourteen Solistes du Studio de l’OpÈra de Lyon (its young artists program). We, all of us — the cast and audience — were enthralled.
Conductor d’HÈrin drove the music of the words, Monteverdi’s dramatic genius bursting into dramatic phrases, with the double continuo of Les Nouveaux CaractËres melding a myriad of colors into the Monteverdi’s unfettered catalogue of affects. It was never mere musical color, it was always word and phrase, a relentless concentration of affects from beginning to end.
Conductor d’HÈron evoked a flowing sensuality of sound, and an obsessive drive that never allowed Poppea and Nerone’s ambitions to falter, culminating in the sublime love duet where Gr¸ber’s actors cross and cross and finally line-up on the most abrupt and corrupt ending of all opera. 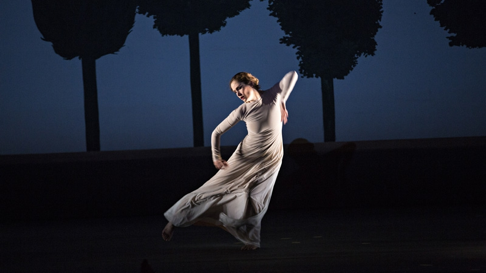 Josefine Gˆhmann as Poppea [Poppea photos copyright Jean-Louis Fernandez, courtesy of the Opera de Lyon]
Director Gr¸ber was a disciple of Giorgio Strehler. He bases much of what he does on Strehler’s minimalistic principles and physical theater convictions. Gruber creates a theatrical language of abstractions, both in positioning and posturing. It is entirely presentational, eschewing all sense of an actual world, remaining always an imaginary, artistic world where the word itself is the only reality. Designer Aillaud’s flat scenery visually embraces Gr¸ber’s artistic spaces to the fullest.
Without the distraction of famous artists attempting to realize such arcane abstractions, we entered this theatrical world through the willing young singers of the OpÈra de Lyon’s studio, who without exception gave total performances. Especially effective were the Nerone of Lithuanian mezzo Laura Zigmantaite and German/Chilean soprano Josefine Gˆhmann who were the only of Gr¸ber’s actors required to realize a constant plasticity of simultaneous gestural and musical movement — a kind of emotional puppetry. Both were consummate performers. 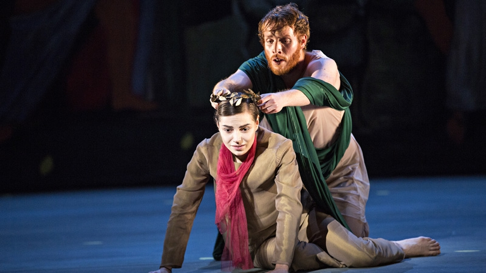 Laura Zigmantaite as Nerone, Oliver Johnston as Lucano
Excellent as well were the Seneca of Polish bass Pawel Kolodziej and the Ottavia of Finnish mezzo Elli Vallinoja. There were many memorable scenes, among them the spellbinding duet as Nerone expounds the sensual splendors of Poppea to his poet friend Lucano, sung by English tenor Oliver Johnston. And as well every scene with Poppea’s nurse Arnalta, sung by French tenor AndrÈ Gass.
Much praise for the success of this revival must be attributed to stage director Ellen Hammer, a directorial collaborator of Klaus Michael Gr¸ber throughout his career. Mme. Hammer however in her program booklet remarks reveals herself needlessly pretentious as well as condescending to these superb young artists.
Cast and Production Information Poppea: Josefine Gˆhmann; Drusilla / Virtu: Emilie Rose Bry; Nerone: Laura Zigmantaite; Ottone: Aline Kostrewa; Arnalta: AndrÈ Gass; Damigella: Amore Rocio Perez; Fortuna / Valletto: Katherine Aitken; Famigliare / Pallade: James Hall; Famigliare / Mercurio / Soldato: Brenton Spiteri; Littore / Liberto: Pierre HÈritier; Ottavia: Elli Vallinoja; Seneca: Pawel Kolodziej; Lucano / Soldato Oliver Johnston; Famigliare Aaron O’Hare. Orchestra: Les Nouveaux CaractËres. Conductor: SÈbastien d’HÈrin; Mise en scËne: Klaus Michael Gr¸ber; Revival director: Ellen Hammer; DÈcors: Gilles Aillaud; Re-creater of sets: Bernard Michel; Costumes: Rudy Sabounghi; Lighting: Dominique Borrini. ThÈ‚tre National Populaire, Lyon, France, March 16, 2017.
Elektra
By definition any Ruth Berghaus production is mythic, and not just because this mega famous stage director was intimately associated with Bertolt Brecht’s Berliner Ensemble and his (and East Germany’s) didactic Epic Theater. Mme. Berghaus thinks and acts in epically scaled proportions.
Like her early mentor Walter Felsenstein (founder of East Berlin’s Komische Oper), Mme. Berghaus insisted on an equal balance of the musical and theatrical elements of opera. This in the light of “regietheater” (which she more or less founded) wherein the director is free to modify period, locale, even the story itself to didactic ends. At the same time the music and text (usually) are sacrosanct, and must not be altered.
All this plays out brilliantly in this 1986 production of Elektra from Dresden’s Semperoper, where it remained in the repertoire until 2012. The orchestra sits, dramatically, on the stage! The Semperoper pit simply could not accommodate Strauss’s 49 winds and percussion players, plus strings (only 50 in Lyon — a minimum number, and certainly the OpÈra Nouvel’s pit would burst even with that number). [Note that there exists a much used reduced orchestration of Elektra for approximately 70 total players.] 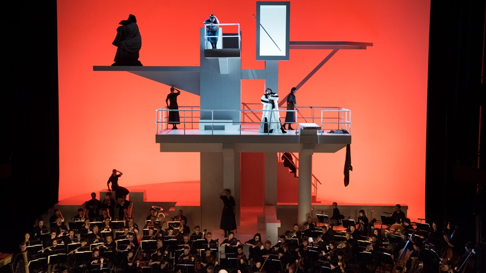 Strauss deemed that an expanded orchestra is necessary to create the colors necessary to his telling of this Greek tragedy, thus it becomes an absolute necessity for a Berghaus production. With this outsized orchestra needing to sit on the stage Elektra’s cellar could only perch above the orchestra. So Mme. Berghaus simply transforms Elektra’s prison into a perch from which the sisters see a world beyond their imprisonment and terror, and from which they search their salvation in the person of their brother Oreste who will murder his and their mother.
It becomes therefore perfect Brechtian Epic Theater — theater as a catalyst for change and renewal. With the orchestra on yhe stage displacing traditional operatic staging convention the primary Brechtian precept was present — distancing the spectator (and I indeed struggled with this distance) from the work of art in order that he might understand, and presumably act on its message rather than to be absorbed into its world.
These many years later, and in a different and far advanced social and political structure I struggled to transform such didactic theater into contemporary art. For me however it remained very much a period piece, evoking impotent nostalgia for the avant-garde of the ephemeral ideals of a failed world, and a longing for real, contemporary avant-garde operatic art.
This Lyon revival was very well cast, and convincingly conducted. It was a quite powerful if cold experience.
Cast and Production Information Elektra: Elena Pankratova; Clytemnestre: Lioba Braun; ChrysothÈmis: Katrin Kapplusch; Egisthe: Thomas Piffka; Oreste: Christof Fischesser; Le prÈcepteur d’Oreste: Bernd Hofmann; La confidente de Clytemnestre: Pascale Obrecht; La porteuse de traine: Marie Cognard; Un Jeune serviteur: Patrick Grahl; Un Vieux serviteur: Paul-Henry Vila; La Surveillante Christina Nilsson. Orchestra of the Opera de Lyon; Solistes du Studio de l’Opera de Lyon. Conductor: Hartmut Haenchen; Mise en scËne: Ruth Berghaus; Revival stage director: Katharina Lang; DÈcors: Hans Dieter Schaal; Costumes: Marie-Luise Strandt; LumiËres: Ulrich Niepel. Opera Nouvel, Lyon, France, March 17, 2017.
Tristan et Isolde
East Germany’s and now Germany’s most famous playwright after Bertold Brecht is Heiner M¸ller. His staging of Wagner’s Tristan und Isolde was a part of the 1993 Bayreuth Festival, and is his only staging of an opera. Though a prolific playwright and dramaturg becoming finally the artistic director of the Berliner Ensemble, he himself staged few plays and then only in the last 15 years of his life.
Unlike Brecht or Ruth Berghaus theater for M¸ller is not didactic, nor does he promote social or political agenda (though it may be referenced). Rather he introduced multiple perspectives into his theater works, destroying linear storytelling and, in fact, drama itself in search of abstracted associations. In this sense M¸ller defined theatrical post-modernism for his generation.
It is no surprise then that M¸ller chose to stage Tristan und Isolde, composed as it is of three protagonists (including King Mark) whose life situations intersect only at brief moments of action, but whose personal dramas, or traumas are powerful and poetic, and associate only by chance.
M¸ller’s collaborator for the Tristan production was avant-garde designer Erick Wonder who with M¸ller locked the opera’s lengthy monologues in a huge, closed box. Theater’s “fourth wall” was in fact an often visible scrim, referenced early in the evening by Isolde placing her hands directly on the [not merely imaginable, but quite real] fourth wall to indicate its boundary and, in fact, significantly, the box’s separation from the audience itself.
The famed love scene of the second act was realized as two simultaneous monologues, the lovers met by placing their hands on an imaginary wall that isolated each from the other. The dreamy intensity of the love duet was rendered by the protagonists kneeling side by side, in separate prayers to love. 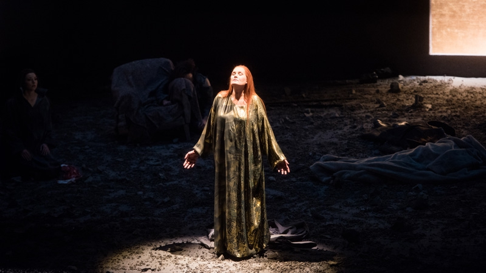 Ann Petersen sings the “Liebestod”
The stage box became Tristan’s decaying chateau in the delirium, its floor now strewn with dead leaves, Tristan resting in a dilapidated easy chair. Blocks of intense color, first red then gold heralded Isolde who shed several cloaks to deliver, finally her “Liebestod” in a golden gown, motionless, breaking through the fourth wall at last, singing directly to us.
The squares of color, large and small, throughout the opera — on the walls, floor and ceiling — visually created the suggestion of separated emotional spaces, reinforcing the abstractions of the dramatic spaces of the protagonists. The staging itself kept each of the protagonists in oblique, abstractly linear movement, intersecting only in the rare moments of action. If nothing else the production itself made a splendid evening of abstract visual art, and this alone was sufficient to propel it to mythic status.
Separating the protagonists, isolating each in a unique space placed enormous responsibility on its artists to create individual theatrical and musical worlds — it is certainly a very difficult requirement, and it may simply have demanded too much. If hopefully this responsibility was fulfilled in Bayreuth back in 1993 it was not just now in Lyon. On the stage the singers were left helplessly on their own, conductor Hartman Haenchen absorbed in a quite detailed reading of Wagner’s score, a reading that excluded the sweep of sensual poetry, the dynamic force of poetic delirium and the depth of tragic, Romantic love.
After the orchestral excesses of Ruth Bergman’s Elektra, the OpÈra de Lyon opted for 69 players in the pit (who indeed sounded like many more), whose apparent artistry was welcome indeed in this otherwise frustrating evening.
Cast and Production Information Tristan: Daniel Kirch; Isolde: Ann Petersen; Roi Marke: Christof Fischesser; Kurwenal: Alejandro Marco-Buhrmester; Melot: Thomas Piffka; Brang‰ne: Eve-Maud Hubeaux; Le Jeune Matelot / Le Berger: Patrick Grahl; Un timonier: Paolo Stupenengo. Chorus and Orchestra of the Opera de Lyon. Direction musicale: Hartmut Haenchen; Mise en scËne: Heiner M¸ller; RÈalisation de la mise en scËne: Stephan Suschke; DÈcors: Erich Wonder; RecrÈation des dÈcors: Kaspar Glarner; Costumes: Yohji Yamamoto; LumiËres: Manfred Voss; RecrÈation des lumiËres: Ulrich Niepel. Opera Nouvel, Lyon, France, March 18, 2017.
Michael Milenski