It is also an opera that performs, rather than theorises, Wagner’s claim
that his operas will fulfil his revolutionary concept of a teleological
art: an art that would save the future world from the philistinism and
barbarism of the present. So, Wagner might have said that Meistersinger is an opera about ‘me, authority and tradition’.

Holten’s new production is ‘revolutionary’ in its own way, turning the
opera inside out, back to front and even (literally) upside down in one
climactic vignette of cultural anarchy. Wagner’s own words, ‘Kinder,
schafft Neues!’ (Children, create new things!) preface the programme-book
synopsis that Holten has penned – and, later, reappear as graffiti on a
toppling wall – so, is Holten telling us that he is taking up Wagner’s
cause?

Wagner transports the audience back to the guild culture of 16th-century
Nuremberg, opening Act 1 inside St. Catherine’s Church where a service is
just ending. Holten and his designer Mia Stensgaard shun historical and
geographical authenticity and create a single set – albeit one which
revolves to destroy its own theatrical illusion of veracity – which is
well-suited to the opera’s scenes of pomp and ceremony but less apt for the
more intimate episodes which probe into the hearts, minds, homes and
streets of the citizens of Nuremberg.

We find ourselves in a grand, panelled room – a gentlemen’s club or Masonic
hall – in the early decades of the 20th century. Glamorous and
sophisticated, this stately chamber is a homage to art deco geometric
angularity, with its polished parquet floor, decorative plinths topped with
lyres, birds and statuettes, and ornamental indoor trees. It’s certainly
handsome to look at and, as the ROH Chorus launched into their lusty
rendition of a Lutheran pastiche, the flashes of chrome and nickel
momentarily suggested vast organ pipes – which helped to push aside the
question of what a church choir was doing in a private members’ club. The
centrepiece is a huge raised ‘throne’ of burnished copper, which put me in
mind of, alternately, an outsized beer tankard and the F.A. Cup. 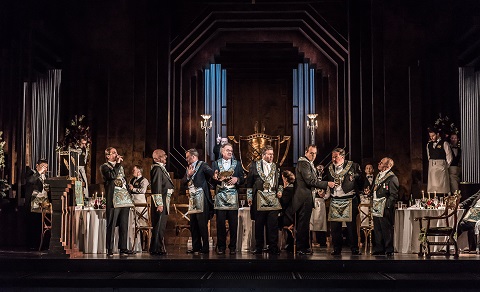 When a team of waiters arrives to set up, under the supervision of Major
Domo David and Stewardess Magdalene, dinner tables for the arriving club
members, we slip back a decade or two into the Edwardian opulence of
Downton Abbey. The tables are laden with flickering candles, glittering
goblets and red floral decorations. Indeed, everyone seems more interested
in what’s for dinner – Beckmesser picks at melon and serrano ham – than the
essential aesthetic dilemma which troubles Wagner’s guildsmen, ‘what is
beautiful?’

And, herein lies a problem with Holten’s conception. The real 16 th-century Meistersingers, having created an idealised lineage
stretching back to the twelve great masters who represented the first
flowering of German culture in the 13th century, were now
concerned that their traditions were falling into disrepair. Sachs and
Beckmesser tussle how these traditions might be saved and maintained; Veit
Pogner addresses the decaying state of art in his presentation to the Guild
Meeting, offering his daughter as a prize that can inject new life into a
dying art form.

In Holten’s theatrical world, however, the prize-song competition seems
irrelevant, even incongruous: when Pogner ‘sells’ his daughter, Eva is more
a trophy Eve than a muse of Parnassus. When a greasy looking Walther
arrives, his rock-band t-shirt, out-sized coat and cool shades are an
eyesore amid the formal regalia of the club, as Holten reverses the
class-relationship between Wagner’s courtly knight and the guildsmen. 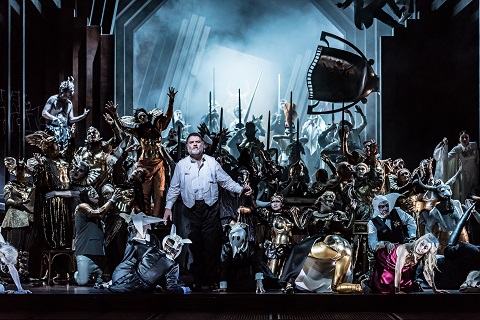 Act 2 does not take us out into the streets and among the people: Sachs
seems to have set up shop in the club dining-room, and the ornamental
planters have to do service for fragrant lime trees and verdant meadows.
Given the incompatibility between set and action, stronger stagecraft is
needed if we are to appreciate the Nurembergers’ lives and minds. Moreover,
the end-of-act fracas between David and Beckmesser mushrooms into a vision
of apocalypse worthy of Hieronymus Bosch: a riot of beasts and devils
swarms the stage – Signe Fabricius’ movement direction is masterly – and
the throne, already on a tilt, is ripped from its pedestal and spun aloft,
as a tattooed, torch-bearing, cloven-hoofed Pan ineffectually calls the
hour. 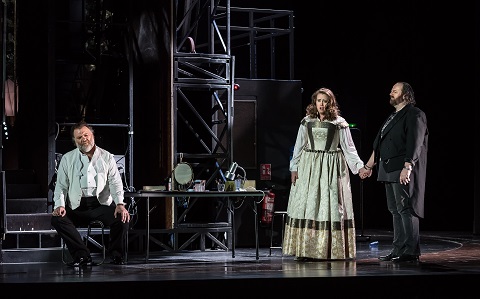 Act 3 appears to tell us that what we have just seen is ‘a dream’, of a
theatrical kind, as the set swivels back to reveal its own ‘back-stage’. A
slow revolve takes us full circle and by the end of the Act we are back in
the gentlemen’s club for the Feast of St. John. Costume Designer Anja Vang
Kragh indulges in hyperbolic pageantry: while the guildsmen, who perch on
raked seating as if watching a dramatic performance, wear modern dress, the
‘mastersingers’ are an explosion of richly coloured finery and frippery,
topped with pavement-slab mortar-boards. Again, the attention to detail is
notable: Sachs even has a boot atop his golden staff. But, surely the
vagrant-like Walther would not get past the doormen?

If there are some question marks over the logic and consistency of Holten’s
concept, the cast score full marks all round for stamina. Byrn Terfel took
a little while to get into his stride – his is quite a subdued Sachs – but
by Act 2 he had the measure of Beckmesser, cobbling with sly insouciance
during his serenade. And, though the relationships between Sachs, Walther
and Eva at times lack clarity, Terfel skilfully conjured pathos in his
scene with Eva. Sachs’ paean to ‘Holy German Art’ can seem like an
unsettling volte-face, but Terfel’s imperious explanation of the need to
preserve and continue the mastersingers’ art smoothed over the swerve. 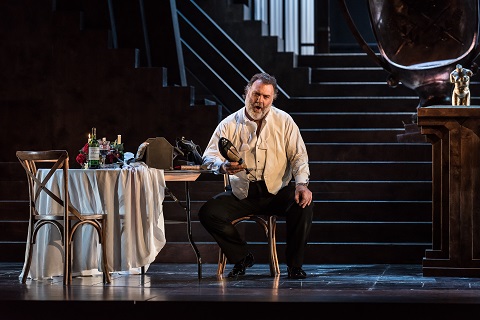 American soprano Rachel Willis-S¯rensen is a creamy-voiced Eva; the
richness and radiance of her voice conveys Eva’s surprising feistiness, as
does Willis-S¯rensen’s nuanced acting – even though she is saddled with a
series of ghastly, unflattering costumes including a dress as sturdy as a
battleship. If only her diction had been clearer; this was a weakness that
was exacerbated by the clarity of Terfel, and that of Gwyn Hughes Jones as
Walther von Stolzing. 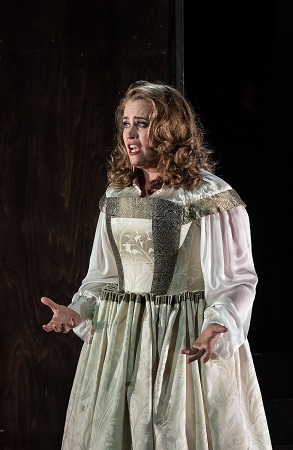 Hughes Jones’ tenor was characteristically warm and honeyed, and he did not
flag once during the long, demanding performance, as he honed his prize
song to expressive perfection over four and a half hours. But, while
unwaveringly lyrical, Hughes Jones sometimes lacked brightness in the
middle register where he was occasionally obscured by the rich brass
orchestrations. It was also hard for the Welsh tenor to establish Walther’s
nobility, given that he looked like a bristly, boorish rocker. 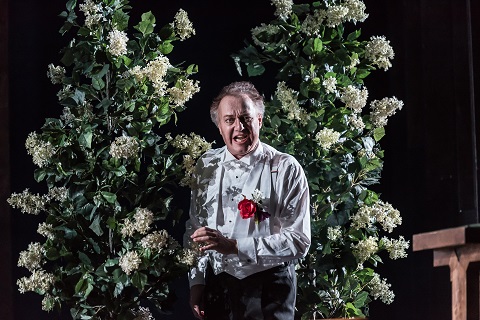 Johann Martin Kr‰nzle was outstanding as Beckmesser, preening and prim, and
oozing smug self-satisfaction. He pulled off the ‘singing badly well’
paradox, and acted superbly with his voice. After his final humiliation, he
lurked in the shadows, his peacock robes replaced by a grubby white vest; a
troubling figure of pathos. 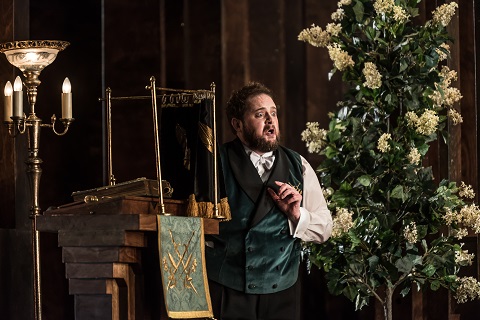 Allan Clayton was confident and exuberant as David; the role was
exceptionally well characterised and Clayton was a persuasive presence,
even when some of the business around him was not. He struck a good rapport
with Hanna Hip’s bright-toned Magdalene. Stephen Milling as Veit Pogner and
Sebastian Holeck as Fritz Kothner also stood out for the authoritativeness
of their singing.

The ROH Chorus were in hearty voice and chorus master William Spaulding
enjoyed his moment in the spotlight, conducting the chorale singers, in Act
1. Antonio Pappano drove the action swiftly on – Meistersinger can
run to five hours, this performance was barely four and a half – and the
ROH Orchestra got better and better. If the overture lacked the full quota
of both gravity and gleam, then the Act 3 prelude was particularly
beautiful – and may have seemed especially touching given the unalleviated
high temperature of the playing preceding.

Holten saves his best trick until last. When the club members arrive for
dinner in Act 1, the female guests are banished: they are clearly just arm
candy. But, when Eva sees both Sachs and Walther acquiesce to the power of
tradition, she’s having none of it. That said, surely Wagner’s message is
that ‘true’ art depends as much on tradition as it does innovation.