In 1983 Stage Director Peter Brook, in collaboration with writer Jean-Claude CarriËre and composer Marius Constant, pared down the French grand opera to its bare essentials and presented La TragÈdie de Carmen, a ninety-minute version of the story.

Rather then enumerate all the characters and musical numbers omitted, I will simply list the main characters and mention much of the music we heard at the Balboa Theatre on Friday evening. The characters were Carmen, Don JosÈ, Zuniga, Micaela, Escamillo, Garcia, and Lillas Pastia. If you are wondering who Garcia is, he is Carmen’s husband. He is mentioned in the Proper MerimÈe’s original book but not in the opera. Brook’s Carmen was no longer a glamorous gypsy and she had lost her factory job. However, she still managed to divert JosÈ’s attention from Micaela even though the latter sang with lustrous tones. The country girl put up a fight, however, and in this version of the story she had more spunk than in the grand opera. 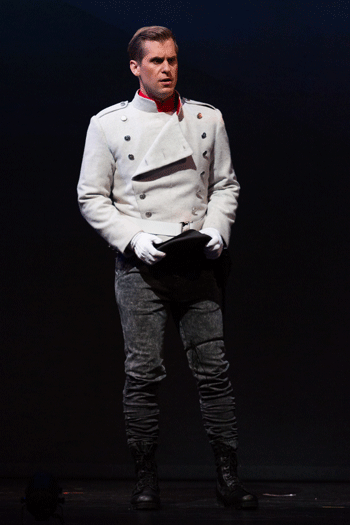 With no chorus of soldiers in the background and no children imitating them, the focus was on the rivalry and its results. Carmen fascinated JosÈ with the “Habanera” but the orchestra had been pared down to a fifteen-member chamber ensemble. Thus, she did not need to have the big operatic voice we normally hear singing over a full orchestra. Peabody Southwell sang Carmen with a sultry sound and played up her intense sexuality. Her “Seguidilla’ was delightful, her “Gypsy Song” enchanting, and there were no extra soldiers to harass her.

Of course with a chamber orchestra and many fewer characters, there were no ensembles in the La TragÈdie. Gone were the smugglers and their wonderful quintet. Instead we saw raw emotion, love and hate. Carmen had become theater. A fine actor as well as a singer, Adrian Kramer painted pictures with the colors in his voice. JosÈ, his possessive, psychotic character, was as essential to the story as Carmen herself. His tragedy grew out of his own actions, however. If only JosÈ had not left his village, he and Micaela might have had a chance at happiness, but after his trip to the big city, he, like many others, would never go back. 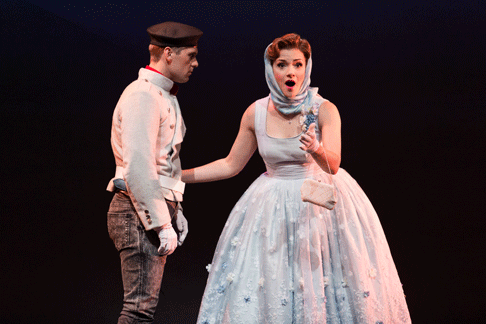 Bass baritone Ryan Kuster gave a thoroughly pleasing performance of Escamillo with a full orchestra at Arizona Opera not too long ago. In San Diego his vocal range seemed to be a bit restricted, but it may be that some of the Toreador’s notes are written lower in La TragÈdie. He was a spectacular matador, however, and for a while it seemed as though Carmen belonged on his arm. Unfortunately, the bull killed him early on and his bloody corpse left the ring in an open cart.

Brook’s Carmen is a young girl eager to make money any way she can in the early scenes but she believes in fate and, for that reason, she understands that sooner or later she will meet her destiny. She is younger and much less of a glamor girl than Bizet’s Carmen, but she will intrigue patrons who are more interested in character and conflict than in the spectacle offered by grand opera.