For this performance of Poulenc’s one-woman emotional roller-coaster, La voix humaine (1959), Opera Holland Park ventured indoors, into
the genteel setting of the Elgar Room at the Royal Albert Hall. The room is
not a large one and some of the sell-out crowd may have found their
sightlines somewhat restricted as Marie Lambert’s intense, taut direction
placed French soprano Anne Sophie Duprels at the centre of a slightly
raised platform, often kneeling, crouching or reclining.

But, the intimacy of the setting, together with Duprels’ astonishing
presence and impact, more than made up for any visual impediment. Duprels’ tour de force also helped mitigate the drabness of the design.
Given the nature of this one-off excursion to the RAH, allowance can be
made for adopting a limited staging, especially for a work that in fact
needs no staging at all (except perhaps a single property, the telephone
itself, which is almost a second character) to make its emotional and
dramatic impact).

But, Lambert’s fluctuating lighting was distracting. And, the dilapidated
plywood bedstead, daubed with blue paint splashes, did little to evoke
Parisian chic. Nor did it suggest the bedroom ‘asleep with remembering’
which contains just a woman and the telephone that she clutches, ‘like a
revolver’, as Cocteau demanded when instructing Poulenc about the design
and staging of the opera in 1959. However, the blue cord of the telephone
was a subtle but powerful visual image: Duprels’ ultramarine fingernails
suggested it was delivering an intravenous infusion of a blue barbiturate,
sedating and hypnotising the anxiety-fuelled woman, as she slipped ever
nearer to sleep, or suicide.

Fortunately, Duprels’ performance pushed any concerns aside. As ‘Elle’, the
lonely woman who makes a desperate telephone call to the lover who has
abandoned her, she spanned an enormous emotional spectrum from terror to
tremulous hope, from existential despair to excitement. We hear just one
side of the conversation but, through careful pacing of the silences and
nuanced repetitions of others’ words, Duprels was able to evoke a world
beyond the forlorn bedroom, thereby deepening her own alienation from
normal human interaction and exchange. As her attempted tÍte-‡-tÍte was
continually disrupted by wrong-numbers, disconnections, crossed-wires and
an intrusive operator, Elle’s inner distress became a palpable but unspoken
inner cry for help, ‘Can you hear me?’ 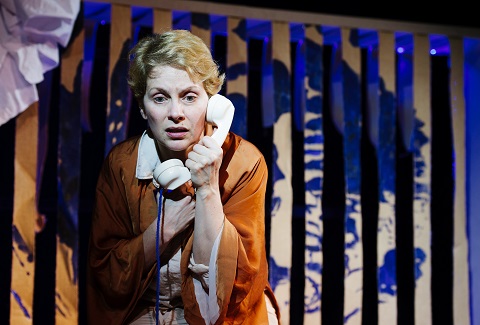 Cocteau’s 1930 play grew out extreme personal crisis: addicted to opium, he
was in the midst of a turbulent affair with a young writer, Jean Desbordes,
who eventually abandoned Cocteau for a woman and joined the French
Resistance movement, suffering a torturous death at the hands of the
Gestapo. Poulenc, in the 1950s, was also suffering private distress,
depression and drug addiction following the death of his partner Lucien
Roubert. Though the work, in both dramatic and operatic form, conveys the
universal experience of grief for a lost love, there is a crypto-homosexual
insinuation in Elle’s quasi-masochistic sensibility which recalls the plays
of Tennessee Williams.

Cocteau does not seem particularly sympathetic towards his protagonist. Her
lies are barefaced – she is wearing his favourite dress (in Lambert’s
production she is draped in an unflattering, dirty, crumpled beige
night-shirt); she has spent the day with her best friend, Marthe, when in
fact she hasn’t left the room; she’s coping well, even though she later
confesses she has tried to take her own life just the evening before.

But, as Elle recollected old love letters and rambled incoherently – almost
a caricature of emotional neediness – Duprels managed to draw sympathy for
the suffering women, despite her histrionics and melodrama. The moment when
Elle discovers that her lover’s mendacity equals her own was full of
pathos. We infer that he is calling her from his apartment, and when the
line suddenly goes dead, she re-dials, only to be answered by the servant
Joseph. Duprels’ reiteration of Joseph’s words, ‘Monsieur is not in and
will not be returning home tonight’, was laden with tragic realisation and
recognition.

Duprels confirmed that she is a tremendous singing actress. Not
surprisingly, every word of the French text was audible and she had a sure
sense of how to accommodate her voice to the small venue. She conjured an
enormous variety of vocal colour and tone: at times whispering, speaking,
crooning, then flowering in full blown lyrical ecstasy, gleaming at the
top, breathless and dusky below. As she tried vainly to win her lover back
with nostalgic remembrance, her voice was caressing, but when pain and
pride broke through Duprels exposed Elle’s bitterness, introducing a shrill
stridency or hardness of tone. Her physical commitment to the role was
consummate, the final moments of Elle’s breakdown gripping and troubling.

Pascal RogÈ was an attentive, detailed and discreet accompanist, powerfully
interjecting with angular, jabbing motifs to portray the climactic peaks of
Elle’s nervous disintegration, but elsewhere delicately hinting at wistful
memories of tenderness or expanding lyrically to convey past passions.

Duprels demonstrated just how powerful a musico-dramatic experience she
could create with limited means and time. I greatly admired Duprels’
performance last year in Mascagni’s in


and her performance here certainly whets the appetite for this year’s
season at Holland Park, where in July she will be reunited with Lambert in
a new production of Leoncavallo’s Zaz‡
whose eponymous ‘heroine’ – a chanteuse raised from the
backstreets to the bright lights – runs her own gamut from fervent passion
to dejected self-pity.