The pseudo-historical plot is an almost unfathomable cat’s-cradle of
intrigues, misalliances and mistaken identities. The King of the Franks,
Faramondo has killed Sveno, the son of Gustavo, the Cimbrian King. The
latter swears vengeance but when his knife is poised above Clotilde,
Faramondo’s sister, Gustavo promptly falls in love with his prisoner, who
is herself in an amorous dalliance with Alfonso, Gustavo’s other son.
Meanwhile, Gustavo’s daughter, Rosimonda, whom he dangles as a prize to
would-be avengers, has fallen in mutual love with Faramondo, but struggles
with her split allegiances – and against Faramondo’s rival for her heart,
Gernando.

The result: amorous stalemate. Lovely aria follows lovely aria as the
protagonists, often alone on stage, bewail the deadlock. As degeneracy
ensues, it’s not always clear where enmity and loyalty dwell. It’s really
no surprise when – in Trovatore fashion – Sveno turns out not to
have been Sveno after all, but Childerico, the son of Gustavo’s ambitious
general Teobaldo who swapped the babes at birth.

Despite the torturous and dramatically encumbering narrative knots, the
score is full of fine features: incisive sinfonie (one for each
act); beautiful melodies; lively, springy rhythms; interesting – often
quite sparse – instrumental colouring; and arias that contrast emotional
excitement with lyrical breadth. Handel reduced the recitative in
Gasparini’s version of the opera – which had already considerably sliced
Zeno’s original libretto – to the barest of minimums but, given that there
is no real ‘action’, this is not a hindrance to a dramatic
comprehensibility that is already stretched to the limits.

When Gˆttingen H‰ndel-Festspiele director Laurence Cummings conducted the
opera at the June 2014 Festival he and his director, Paul Curran, opted
wisely to dispense with historical ‘veracity’ and shifted the action to a
mafioso gangland in the mid-twentieth century. For this collaboration
between the London Handel Festival and the Royal College of Music’s
International Opera School director William Relton and designer Cordelia
Chisholm retain the Scorsese-inspired setting and add a dash of West Side Story in the form of rival gangs of knife-wielding
ganstas and hoods.

Faramondo is the leather-clad leader of one band of thugs, Gernando heads a
rival clan of glue-sniffing skinheads, while Gustavo is a sharp-suited
casino magnate. We’re in a twilight zone. Blood oaths bind the members of
Gustavo’s Family and flick knives flash in the stark glare of the strip
lights on every seedy corner. Casting a patina of glamour over this sordid
underworld are the sultry lights and glitter balls of Gustavo’s wine bar.
At one point, Rosimonda – glitzy in gold lamÈ – spins a star turn in front
of the mic to entertain the gamblers. 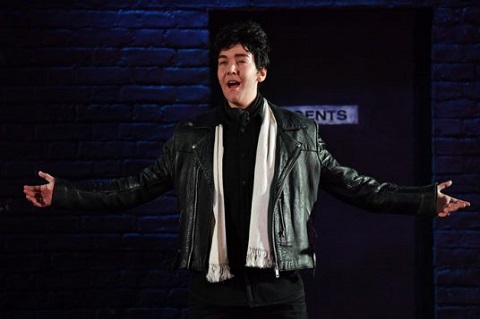 There’s plenty of ‘business’, much of it clever, some of it overly fussy,
nearly all of it irrelevant to what is being sung, or even felt. The da
capo repeats are supplemented not with melodic ornamentation but with
excessive alcohol and drug consumption. Faramondo’s mobsters swig from
bottles of beer, he gulps from a hip-flask, and having emptied the used
glasses on the tables of Gustavo’s, Clotilde grabs a bottle and lets the
bubbles flow. Rosimonda drags agitatedly on a cigarette, while Gernando
fuels his da capo with a deep inhalation of solvents. Nifty use of a cross
curtain, which allows for swift changes of locale, keeps things swinging
along.

After a vibrant overture from the London Handel Orchestra led by Oliver
Webber, the cast took a little while to settle. There were some slips of
intonation and stage-pit timing in the opening few numbers, the coloratura
was sometimes rather muddy and I don’t think I heard a trill characterised
by the requisite evenness, accuracy of tuning and speed in the first Act.
That’s not to suggest that the singing was bad – there was much colour and
charm – just that a certain polish was lacking.

Fortunately, the singers found their feet subsequently. In the title role,
however, mezzo soprano Ida R‰nzlˆv was in a class of her own from the
start. There is a real richness to R‰nzlˆv’s sound and a vividness of tone;
she demonstrated a natural feeling for the Handelian phrase, delivering the
coloratura with effortless seamlessness and crafting a fine cantabile.
R‰nzlˆv also demonstrated dramatic range and – in this opera, no mean feat
– credibility, conveying both Faramondo’s vicious streak and an underlying
tenderness.

Similarly, Beth Moxon convincing captured the conflicted Rosimonda’s inner
battle with desire and duty. The only thing she seemed certain about, as
she strutted and fretted back and forth, compulsively chain-smoking, was
her disdain for Gernando. Rosimonda’s vengeance aria bristled, but her
final aria charmed and calmed. 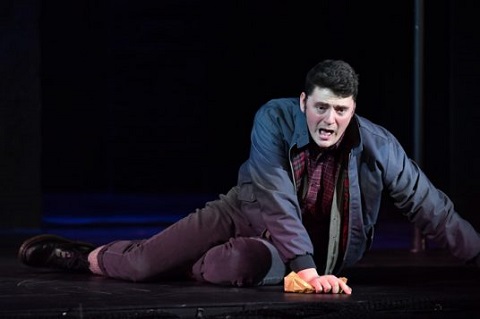 The few ensembles of Acts 2 and 3 contain some of the finest music of the
opera; the cheerful intertwining of the central lovers mezzos at the end of
Act 2 offered hope for resolution, although Clotilde and Adolfo shared a
more muted moment at the start of the final Act.

Soprano Harriet Eyley sparkled as a gamine Clotilde. Josephine Goddard was
her hopelessly love-struck suitor; though Goddard’s soprano has vocal
elegance, her Jimmy Krankie wig did not add to her dignity.

New Zealand baritone Kieran Ryaner was a dark-voiced Gustavo but though he
could call on significant weight and power his coloratura was not always
finely focused; countertenor Timothy Morgan relished Gernando’s unsavoury
sleaziness. Baritone Harry Thatcher was a confident Teobaldo and Lauren
Morris made her mark as the diffident nerd Childerico, even though the role
has no arias.

With revenge, restitution and realignment all satisfactorily effected,
Faramondo’s final aria led into a spirited chorus. But, while the
protagonists sang of Virtue’s merits, the villainy continued, as
Faramondo’s heavies despatched the victims of Gustavo’s lingering
resentment and rancour: a quick flick of an efficient knife and off they
went, dragged feet first. In Relton’s eyes, there is no distinction between
those with morals and those without. I guess they are all Goodfellas.