Soviet censorship nixed the publication of Mikhail Bulgakov’s 1925 satirical
novella, Heart of a Dog, on which Cesare Mazzonis based his libretto.
Its plot, in which an eminent professor transplants a man’s pituitary gland and
testicles into a scraggy stray dog, is an allegory of the foisting of Communist
ideology on Russian society. Professor Preobrazhensky (his name is related to
the word “transformation”) wants to rejuvenate the dog, Sharik. But instead of
just perking up, Sharik starts becoming human, eventually transforming into
Sharikov. This rude, lascivious menace turns the professor, his assistant Dr.
Bormenthal, and their servants into nervous wrecks. Further galling the
professor’s life is Shvonder, his apartment building’s Head of the Residents’
Committee. He tries to shrink the professor’s living space and gives Sharikov a
job ridding the city of stray cats. When Sharikov’s lying, befouling and sexual
incontinence get out of control, the professor reverses the transplant, turning
him back into an agreeable dog. 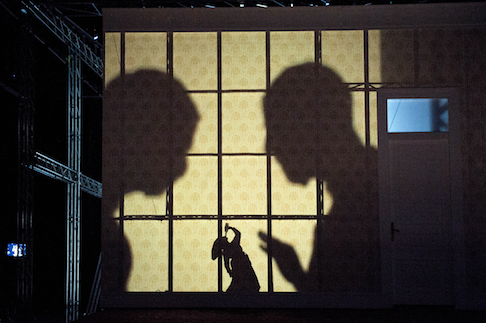 Scene from A Dog’s Heart

McBurney’s staging, revived under Josie Baxter’s supervision, visually
realizes the great divide between the professor, ensconced in his
gold-and-white rooms, and the grey-clad proletarian masses he despises.
Preobrazhensky, who dresses for dinner and enjoys fine wine and Italian opera,
has to endure Shvonder and his workers droning Soviet hymns. By means of an
enormous wall that slides backwards and forwards, the action moves from room to
room or out onto the snowy streets. The wall also serves as a screen for
projecting footage in 1920s Russian style. Every aspect of this darkly
hilarious production, from prop to personage, is purposefully choreographed. It
is difficult to decide which performance is more fascinating: Sharik the puppet
dog and his four handlers using bunraku, a Japanese puppetry
technique, or tenor Peter Hoare as the unmistakably canine Sharikov. Although
the handlers are visible all the time, Sharik slinks, leaps and drools so
naturally, that one forgets all about them. Hoare is so uninhibitedly feral
that when Bormenthal wants to kill him, the audience sympathizes.

The cast, led by a commanding Sergei Leiferkus as the professor, is
uniformly convincing. Baritone Ville Rusanen was a vocally excellent Bormenthal
and bass Gennady Bezzubenkov a hair-raisingly sinister, string-pulling Big
Boss. Only Hoare and the dog, however, could compete with the brilliant stage
business. Some of the briefest scenes are the best, such as a dream sequence in
which Sharikov embarrasses Preobrazhensky in front of his colleagues with a
lewd song. The two operations also stand out — one comical, using shadow
theatre, the second alarmingly gory. Besides moving like clockwork, the staging
is deliciously illustrative, with cats swinging from the chandelier (more
puppet wizardry) and pink monkey ovaries bobbing in green fluid. 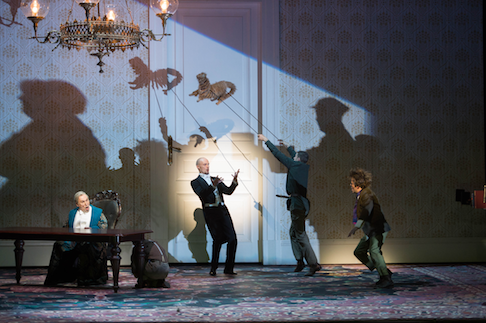 Raskatov’s angular score bravely extends the satirical operatic legacy of
Dmitri Shostakovich (The Nose) and Alfred Schnittke ( Life with an
Idiot), applying the same polystylistic idiom. However, unlike the
staging, the score does not have a clear narrative. It supports and punctuates,
rather than recounts. Raskatov creates a myriad sound effects and impressions
by supplementing the traditional orchestra with, among others, a saxophone
family, a balalaika, an electric guitar, a harpsichord and percussion galore.
The Netherlands Chamber Orchestra under Martyn Brabbins adeptly evoked the
plentiful flavors, which, alas, do not amount to an intriguing three-course
dinner. The score’s strongest point is that it assigns each character a
recognizable vocal style. Sharik has two voices, sometimes singing together:
Nasty Sharik, soprano Elena Vassilieva growling into a megaphone, and Nice
Sharik, plaintive countertenor Andrew Watts. Like his predecessors, Raskatov
follows Russian speech rhythms, but his vocal means are limited in
variation. 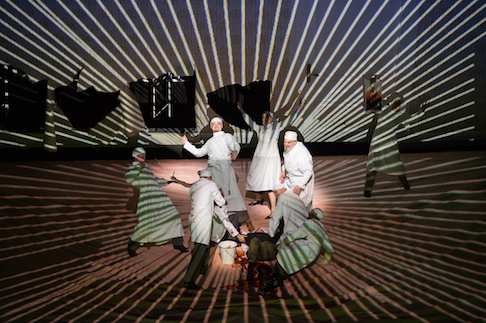 After a while, three main styles emerge. The men either huff in staccato
syllables or repeat legato phrases in short ariosos, while the women shriek out
notes with agonizing intervals. Alexey Sulimov whined efficaciously as killjoy
Comrade Shvonder. Elena Vassilieva, Nasty Sharik, doubled as Darya the cook,
who mostly reached for top notes or fished for bottom ones. As the excitable
maid Zina, Nancy Allen Lundy’s chief task was to squeal out improbably high
notes. Sharikov’s fiancÈe, soprano Sophie Desmars, suffered in jagged
coloratura, then sang some warming-up vocal exercises. Raskatov’s intentions
and orchestral colors are thought through, and it is a shame that his score is
not more distinguished. Some excerpts, such as the screaming duet between Darya
and Zina, are so heavy-handed as to miss their caricatural point entirely. The
music works best when decorating speech or escalating tension with whiplashing
dissonant chords. If one doesn’t think of A Dog’s Heart as an opera,
the score is a highly effective soundtrack for a singular, special piece of
theatre.