Sondra Radvanovsky opened the program with a rendition of the Bolero from Giuseppe Verdi’s I Vespri Siciliani, “Merce, dilette amiche” (“Thank you dear friends”). At first she seemed still to be warming up, but her voice soon attained its usual lustre and radiant qualities. Later, she sang a heart rending version of “Senza Mamma” (“without Mama”) from Giacomo Puccini’s Suor Angelica. She sang two duets with Domingo who was in marvelous voice for this auspicious occasion. They joined their voices in the revealing “Orfanella il tetto umile” (“An Orphan under a Humble Roof”) from Verdi’s Simon Boccanegra and the sophisticated “Lippen Schweigen” (“Silent Lips”) from Johann Strauss’s Die Fledermaus.
Although Diana Damrau and Nicholas TestÈ, who are currently appearing in LA Opera’s production of The Tales of Hoffmann were expected to sing at the concert, their health issues did not allow it. However, with the profusion of talent available among the members of past and present LAO Young Artist Programs, the concert provided an excellent showcase. 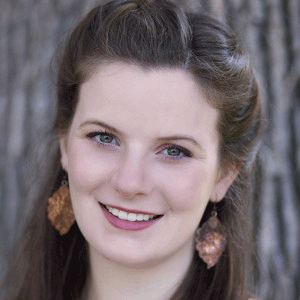 Liv Redpath
Unlike most opera concerts, this program included ensembles. For the Rigoletto Quartet, “Bella figlia dell’amore” (“Beautiful Daughter of Love”), Kihun Yoon was a lyrical Rigoletto, Hyesang Park a refined Gilda, Joshua Guerrero a warm-voiced Duke and RenÈe Rapier an experienced Maddalena who did not fall for one word of the Duke’s flattery. A different group, consisting of Carlos Enrique Santelli, RenÈ Rapier, So Young Park, Michelle Siemens, Theo Hoffman, and Nicholas Brownlee, sang the smartly contrapuntal but rather slow moving sextet “Siete voi? . . . Questo Ë un nodo avvilupato” (“Is that you? This is a tangled knot”) from Gioachino Rossini’s Cinderella.
Duets abounded. First year program member Liv Redpath showed not only the beauty of her mid-sized voice but also a talent for comedy when she sang “Pronto io son” from Gaetano Donizetti’s Don Pasquale with equally talented program member Theo Hoffman. I can’t help thinking that one of Joshua Guerrero’s daydreams was to sing with Domingo. With robust tones, the young tenor and the tenor-turned-baritone sang “Au Fond du Temple Saint” from Georges Bizet’s The Pearlfishers.
From Mozart’s The Marriage of Figaro, Lauren Michelle as Susanna and Summer Hassan as the Countess sang an exquisite rendition of “Sull’aria . . . Che soave zeffiretto” (“On the air…The soft breeze”) and from Donizetti’s Lucia di Lammermoor, Hyesang Park and Guerrero sang “Verranno a te” (“They will come to you”) in lovely bel canto style. One of the great delights of Vincenzo Bellini’s I Puritani is its duet for lower male voices, “Suoni la tromba” (“Sound the Trumpet”). While Kihun Yoon and Nicholas Brownlee did not have the decibel power of some of the vocal stars best known for this duet, they sang it with well focused tones and and were greeted with plentiful bravos at the finish.
Some artists displayed their special talents with solo arias. Nicholas Brownlee has a wide range of dynamics and the aria “La lluvia ha cesado” (“The Rain has Stopped”) from Ruperto Chapi’s zarzuela La Tempestad allowed him to start softly, make a huge crescendo to illustrate a severe storm, then show the peaceful ambience that follows such a storm. When Brenton Ryan sang “Oh, the Lion may Roar” from John Corigliano’s The Ghosts of Versailles, he seemed to be channeling Hollywood actor Frank Gorshin. The piece tells of the invincibility of the common worm and was a perfect vehicle for this opera “bad guy” who sang with a scary style.
The Queen of the Night’s arias from The Magic Flute hold no terrors for So Young Park and she easily tossed off “O zittre nicht” (“Don’t tremble”) for this appreciative audience. Lauren Michelle, a 2015 prize winner at the BBC Cardiff Singer of the World Contest, delighted this audience with Jules Massenet’s “Dis-moi que je suis belle” (“Tell me that I’m beautiful”) from Thais.
Then the champagne began to flow backstage and Hyesang Park appeared with a tilted glass of bubbly. Singing “No se quÈ siento aqui” (“ I don’t know here”) from Manuel Fernandez Caballero’s Chateau Margaux with bell-like tones, she began the finale, which included the entire cast singing the “Champagne Song” from Johann Strauss’s Die Fledermaus. Since Placido Domingo sang duets with Radvanovsky and Guerrero, LA Opera veteran conductor Grant Gershon led several of the selections at comfortable tempi. However, Domingo led most offerings with his well known verve and joie de vivre.