Blood on white sheets usually denotes deflowered brides but in Giovanni
Andrea Moniglia’s libretto, derived from Aeschylus’s Danaid trilogy, it’s a
symbol of decapitated husbands. This libretto has many streams of tears and
red rivers of blood.

Pre-curtain-up the nuptial signs seemed favourable. Just as Pippa Middleton
was getting hitched to a moneyed financier in Berkshire so, amid the
rolling Sussex Downs, 50 white-frocked brides were marrying 50 sheikhs,
resplendent in red keffiyehs and designer shades, the couples parading
their finery in the gardens of Glyndebourne. But, once inside the House,
the front curtain confirmed that these were the soon-to-be-slaughtered
betrotheds of Danao’s daughters.

Cavalli’s grandiose three-act festa teatrale is an example of a
pan-European dramma regio musicale which, like Cavalli’s and
Bissari’s Bradamante – which was performed at the royal palace in
Milan in 1658 – celebrated the birth of Prince Philip Prosper, the Spanish
Infanta. Hipermestra had in fact been completed four years before
its June 1658 premiere; it had originally been commissioned to celebrate
the birthday of the Grand Duchess Vittoria Della Rovere, wife of Ferdinand
II de’Medici, in 1654, but the re-design of the Florentine Pergola theatre,
together with organisation and financial difficulties – and the threat of
plague – led to it being postponed and its dedicatee changed.

The opera conforms to what Ellen Rosand (in Opera in Seventeenth-Century Venice) describes as the ‘Faustini
formula’ – after librettist Giovanni Faustini (1615-51): it narrates the
history of ‘two pairs of lovers, surrounded by a variety comic characters,
whose adventures involved separation and eventual reunion’. 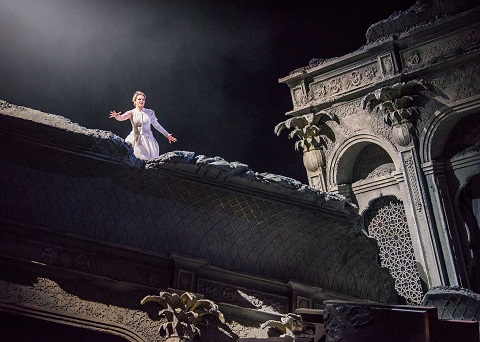 King Danao, chased from Libya by the 50 sons of his brother, Egitto, has
fled to safety in Argos, of which he later becomes King. Informed by an
oracle that he will lose his life at the hands of one of his nephews, he
commands his own 50 daughters to wed their cousins and kill his would-be
assassins in their marital beds. However, Danao’s eldest daughter,
Hipermestra, has fallen in love with Linceo and, revealing the threat to
his life, helps him escape; her betrayal leads to her imprisonment. Linceo
returns with a vast army to free his wife and destroy Danao, but jealous
desire – in the form of Arbante who covets Hipermestra and denies his own
wife, Elisa – intervenes: false accusations of infidelity and apocalyptic
carnage ensue. Believing Hipermestra to be faithless and dead, Linceo seeks
solace with Elisa, but saved from self-sacrifice by a magical bird who
scoops her up as she falls from a tower, Hipermestra is ultimately reunited
with Linceo.

No expense was spared for the first performances of this opera. The sets
were by Ferdinando Tacca (1619-1689) and the detailed drawings of Stefano
della Bella’s costume sketches (see the 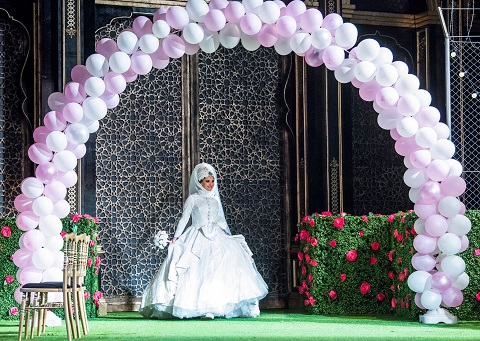 Stuart Nunn’s design and Giuseppe di Iorio’s lighting are similarly rich
and detailed. Multiple locations in Acts 1 and 2 are framed within the
angled black-gold colonnades and porticos of Danao’s Arabian palace. East
mingles with West, and past with present, much like any modern Middle
Eastern state, I guess. Natty cerise outfits are shrouded in black hijabs;
underneath sombre thwabs, business suits and glinting tie-pins attest to
wealth and power. Director Graham Vick and his design team do not strive
for direct parallels with modern Arab states or Caliphates. But, the links
between oil-rich dynasties and oppressive regimes is clear: the women, even
when permitted to momentarily voice ideals, beliefs, hopes, and to express
desires, are quickly wrapped up in veils and abayas.

Act 1 opens in Danao’s garden, as the King oversees a circular parade of
nuptial couples through a white and pink hoop of balloons: it’s an Alice in Wonderland illusion, all red roses and sparkling gold
fairy-lights; the multi-tiered wedding-cake topped with sugar-icing
Byzantine domes.

Nunn economically recreates the characterless luxury of a 5-star hotel
bedroom, the rhythmically ‘in tune’ laundry where the tumble driers spin
away bloodshed, and the stark sand-dunes where the pumping oil-rigs
figuratively spew up black-slimed money. The desert garage where Danao Oil
provides a petrol oasis – complete with Coca-Cola vending machine – is
gate-crashed by Linceo’s armoured war truck, which spectacularly catches
fire in Act 2. While the design is detailed, Vick’s direction is fairly laissez-faire: there’s a lot of lamenting and hand/head-wringing,
prowling and machine-gun swinging, but the ‘arias’ themselves – such as
they exist: Cavalli’s score is dominated by fluid arioso in which
recitative and aria are barely distinguishable – are fairly inert,
enlivened principally by quirky design features.

One challenge for the modern director is Cavalli’s blend of broad comedy and tragedy, a clash of sensibilities which jarred with
contemporary audiences – at least those prone to aesthetic philosophising.
In 1700, Giovanni Crescimbeni, spokesperson for the Accademia ’d’Arcadia,
complained of Cicognini’s Giasone that, ‘with unparalleled
monstrosity’, it mixed kings and heroes with buffoons and servants,
resulting in a ‘hodgepodge of characters that caused the utter ruin of the
poetic rules’ (cited in Readying Cavalli’s Operas for the Stage,
Rosand). Such complaints about the amalgam of tragic elements with farce
led to the reforms associated with the poet Metastasio, which resulted in
the ‘rules’ of opera seria.

Vick just about controls the schizophrenic lurching between farce and
tragedy. The threat of imbalance is most forcefully represented by
Hipermestra’s nurse, Berenice – played exuberantly by a bearded Mark Wilde.
A clear descendant of Monteverdi’s Iro (Il ritorno d’Ulisse in patria) and the wily old nurses of the commedia dell’arte, Wilde’s Berenice is a sly, pragmatic
opportunist who forms a comic foil to the lovers’ idealism, jealousy and
yearning; urging Elisa and Hipermestra to grab sexual fulfilment when it is
on offer, Berenice disparages fidelity and steadfastness in favour of
fickle self-gratification.

With more than a dash of Les Dawson’s handbag-swinging dames, Wilde’s
Berenice confirms Jane Glover’s assertion (in her 1978 monograph on
Cavalli) that the commedia-derived characters are more strongly
characterised musically than their ‘serious’ mistresses and masters. And,
Wilde uses his pliant tenor to add some realism: perhaps Hipermestra would
be better advised to accept the handsome general Arbante’s marriage
proposal than continue to lament the warring Linceo’s absence.

Wilde is boisterous and raucous, shoving musicians aside and launching
himself amid the instrumentalists for a comic romp bewailing that ‘youth is
wasted on the young’: after filching William Christie’s skull-cap and
fondling his pate, Wilde scribbled down his mobile number and thrust it
into the hands of a front-row audience member, signalling that he’d be
expecting a call …

The 10-player ensemble, drawn from the Orchestra of the Age of
Enlightenment, may be one of the smallest groups to accompany an opera at
Glyndebourne, but they are in no way marginal to the action. Just as the
singers prowl in their midst, they take to the stage, emphasising the
fable-like quality of the opera. Nowhere is this fluidity more powerfully
conveyed than at the start of Act 3 when, amid the ruins of Argos, a lone
fiddler strikes up a musical call-to-arms: tentatively, the other musicians
appeared, stepping over the blood-splattered bed, fractured furniture and
collapsed columns to reassume their positions at the front of the stage.
Anarchy is redeemed by culture, to misrepresent Matthew Arnold.

In the title role, Em?ke Bar·th seemed a little tentative initially, but
her tone brightened and her voice relaxed. By the time we reached her Act 3
suicidal soliloquy she had mastered the move which Cavalli enacts in each
lament from fragmented chromatic phrasing to more formal ‘aria’. Atop the
broken walls of Argos, Bar·th projected strongly. When she leapt to her
‘doom’, it was with startling alacrity that Juno’s peacock spooned up the
falling suicide and bore her aloft to the lieto fine. 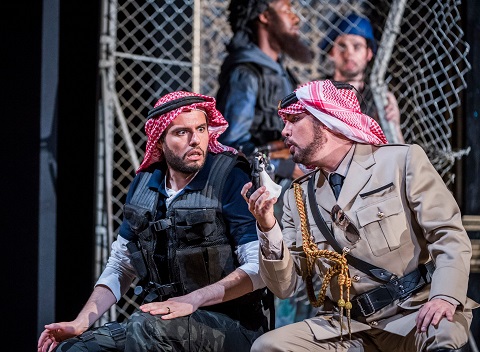 At times I had difficulty reconciling the different vocal registers and
colours with dramatic contexts. Raffaele Pe’s countertenor danced with
light-weight frivolity when he and Hipermestra crawled out from beneath the
frosted wedding cake; as he waited, with eager, self-preening lust, to
consummate the marriage – teased for his haste – tenderness seemed lacking.
And, in Act 3 Pe increasingly sounded hysterical rather than driven by
hate-fuelled machismo: as the tessitura rose his voice sometimes lost
strength and focus, and strayed sharp. But, these comments present an
unduly negative portrait: overall, Pe captured the fervency and
unpredictability which arises when devotion is undermined by disloyalty.

I admired Renato Dolcini’s Danao: a blend of Leontes and Lear, he is duped
by oracle, demands duty from his daughter, and when defied disowns and
punishes her – with scourges, chains and irons. Discovering that he has
slaughtered the innocents while the guilty roam free, Dolcini was not
afraid to give voice to growls and groans of self-castigation; finding that
his daughter has betrayed him, he spat out plosive consonants of anger.
Later, Dolcini conveyed the pathos of loss: no longer is he a father just a
King, and soon he is not even that – like Lear, Danao finds his patriarchal
and regal power dissolved, and with the advance of Linceo’s army
anticipates ignominy and defeat.

Benjamin Hulett’s Arbante burns with Iago-like duplicity: the tenderness of
his voice belies Arbante’s villainy. But, while Iago wants to destroy
others, and what they covet, simply because they have a desire that he
cannot recognise, in Act 3 Hullet reveals Arbante’s self-awareness with a
lovely soft grain which he is not afraid to crack and strain when conveying
recognition of his unredeemable evil. Ana Quintans is superb as Elisa, the
glint to her soprano equal to the flash of Hipermestra’s redundant, disused
knife. 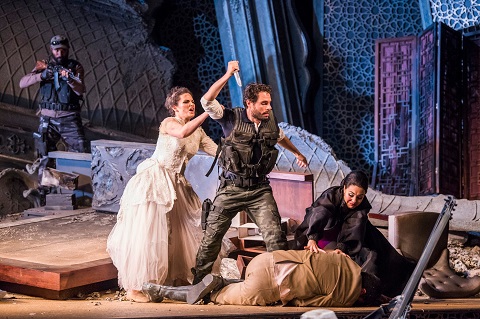 The last contemporary performance of Hipermestra took place in
1680 in Pisa in a commercial theatre, 8 years after Cavalli’s death, and
the first modern performance since the 17th century took place in Utrecht,
in August 2006, on the occasion of the 25th anniversary of the renowned
Early Music Festival. Glyndebourne have done Cavalli and us all a service
in giving us another chance to hear this detailed, contradictory work.

In the closing stages, one character sings – ‘I’m not sure if this love is
wise or if it’s insane,/The more I think about it the less I understand.’
One might say the same about Cavalli’s opera itself. But, Glyndebourne,
Vick, Nunn and Christie embrace the anarchy and in so doing tell us a lot
about ourselves.