Will we add Anoushka Shankar/David Murphy to the Trivial Pursuit
card-pack in future years? For they have guided and shaped Ravi Shankar’s
last musical thoughts and sketches to fruition: the result being the opera, Sukanya, which has been performed on its premiere-tour in Leicester,
Salford, Birmingham and finally here at the Royal Festival Hall in London.

When sitar-player and musical guru Shankar died in 2012 at the age of 92,
he left behind sketches of an opera. A coincidental meeting of the personal
and mythological had triggered the eighty-year-old musician’s operatic
imagination. He discovered that his third wife, Sukanya Rajan (the mother
of his daughter Anoushka Shankar, a renowned sitar-player in her own right)
shared her name with a character in one his favourite tales from the
ancient Sanskrit epic, the Mah?bh?rata, which
recounts the story of a young woman who accidentally blinds an old sage,
Chyavana, with whom she then falls in love and marries, and to whom she
stays faithful despite the advances of two envious, roguish demi-gods.
These Aswini Twins struggle to understand how a decrepit mortal can appeal
to such youth and beauty. They put Sukanya to a test which she passes, and
which proves redeeming. 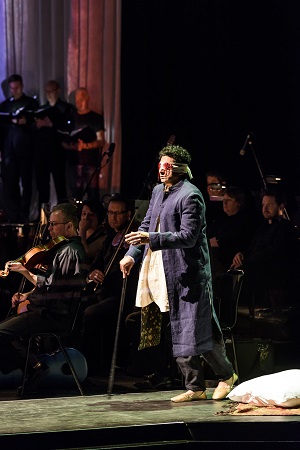 Shankar’s sketches have been assembled and posthumously fleshed out by
Anoushka Shankar and composer-conductor David Murphy. One can see that
autobiographical resonances may have drawn Shankar to this tale but this
staging of the work is anything but intimate. Director Suba Das’s sweeping,
triple-staircase design raises and brings to the fore the soloists, dancers
and Indian musicians, who make for a feast of colour against the black-clad
BBC Singers ranged on the side-stairs and the London Philharmonic Orchestra
nestled on the left and right of the stage below. 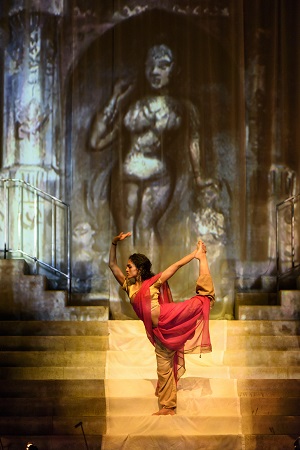 Visually, the collaborative outcome is a veritable feast. 59 Productions, led by Akhila Krishnan, and choreographer Aakash
Odedra ensure that light, colour, movement – by turns sensuous and subdued
– stimulate and provoke our sensual appetites. The kaleidoscopic diversity
of the Indian sub-continent is conjured in all its mystery: from softly
lit, pastel landscapes of rose pink and dusky grey, to jungles of emerald
green and sun-drenched ochre plains whose colours blaze and dazzle. Digital
animations seductively transport us from land to sky to sea, from the
historic Mah?bh?rata to the present day. 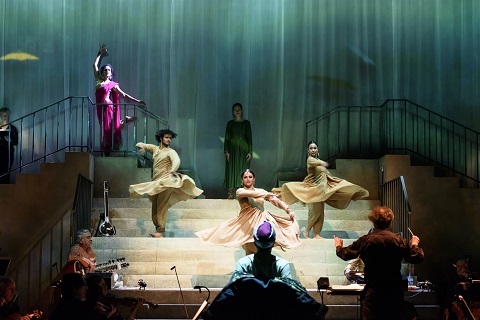 The performance was described as ‘semi-staged’ but with so many bodies on
stage the responsibility for conveying the progression of narrative mood
was largely born by the silk-draped, be-jewelled dancers whose captivating
whirls and leaps were astonishingly athletic, and whose elaborate hand and
facial gestures were enchantingly expressive. The combination of classical
Indian movement motifs and the evocative timbres conjured by the five
Indian musicians (M. Balachandar, Rajkumar Misra, Parimal Sadaphal, Ashwani
Shankar and Pirashanna Thevarajah) was by turns magical and invigorating.
The opening sitar improvisation, penetrating the semi-darkness, immediately
erased the present time and place; there was some remarkable rhythmic
explosiveness from the tabla – enhanced by konnokol (percussive vocal
singing), while the shehnai oboe injected an elegiac wistfulness. 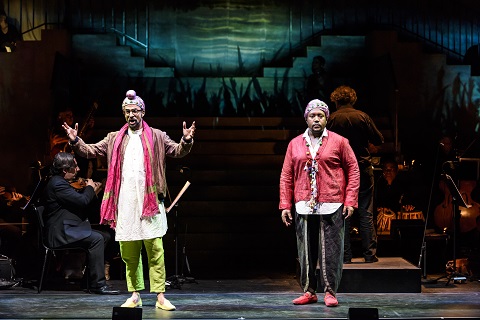 The playing of the LPO was superb and David Murphy calmly and clearly held
the large forces together. I was less convinced by the score itself though;
and, it was difficult to know where Shankar ended and Murphy began. Some of
the well-crafted orchestrations were effectively atmospheric and
the familiar classical gestures and styles moved suavely along; but, West
and East were placed side-by-side rather than integrated, and while the
Indian elements seemed pungent and zestful, the Western fabric onto which
the former were etched were harmonically and temporally repetitive. I
appreciate that Murphy has striven to respect the conventions of raga in
which improvisation on a set of given notes creates atmosphere and meaning
through emphasis and articulation. But, the result was frequently somewhat
banal minimalist mood-painting, occasionally enlivened by folk-inflections
– at times, I was put in mind of Michael Nyman’s score for The Piano and of Enya’s multi-vocal fusion of Irish folk music and
Rachmaninov-like Romantic rapture. 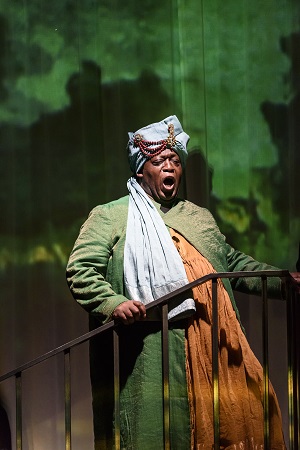 More problematic still is Amit Chaudhuri’s libretto. I struggled to find
the professed allusions to ‘Shakespeare, Tagore, T.S. Eliot and beyond’
amid its uncomfortable mix of poetic self-awareness and prosaic mundanity.
It wasn’t helped by some awkward text-setting and unnatural verbal rhythms,
though there were moments were word and music came together to create
poignancy and honesty – as when Chyavana explains the mysteries of raga to
Sukanya.

Fortunately, the cast offered strong vocal performances which pushed some
of my misgivings temporarily aside. Bass-baritone Keel Watson was imposing
and resonant as King Sharyaati while Njabulo Madlala and Michel de Souza,
as the unscrupulous Aswini Twins, provided some much-needed mischief and
lightness. Tenor Alok Kumar was convincing as Chyavana but it was soprano
Susanna Hurrell who shone most brightly, her soaring lines glowing and
warm, the pure tone blending beguiling with the Indian musical elements. 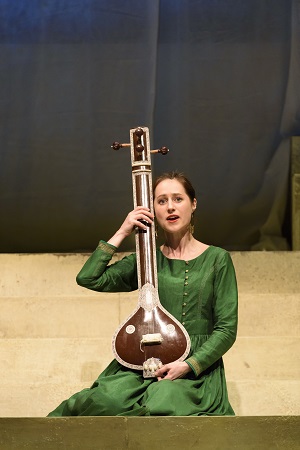 Sukanya
has had a long gestation: Shankar’s earliest ideas for the work date from
the mid-1990s and excerpts were presented at the Royal Opera House with the
London Philharmonic Orchestra – with whom Shankar enjoyed a long
relationship – in 2014. This premiere tour has taken the opera from The
Curve in Leicester, to Symphony Hall Birmingham, to the Lowry in Sheffield,
finally arriving at the Royal Festival Hall. The many musicians, artists
and administrators who have collaborated to bring Sukanya to the
stage are to be greatly credited and thanked.

In his work with the LPO – who followed the first European performance of
Shankar’s Sitar Concerto No.2 in 1982 with the world premiere of his Symphony in 2010 – and in his historic collaborations with Yehudi
Menuhin, Shankar never aimed for ‘fusion’. Indeed, the recording that he
made with Menuhin is entitled ‘West Meets East’: Shankar aimed for
interplay not amalgamation, and it was the conversation between idioms
which was so spellbinding.

But, opera implies ‘synthesis’ and in Sukanya I did not feel that
text and tone came together in expressive union. The layering of different
aural and visual worlds was exciting, the result a vibrant, shifting, often
mesmerising, mosaic. But, at the end my senses felt paradoxically
over-stimulated and unsatisfied: it was hard to determine whence ‘meaning’
lay. This performance at the RFH was certainly a ‘spectacle’; I’m not so
sure it was an opera.