Mr. Somers’ challenging three act opera, set to a text by Mavor Moore with the collaboration of Jacques Languirand, charts the fascinating history of Louis David Riel. Now a national hero, Riel helped found the province of Manitoba, and he championed the plight of the MÈtis indigenous prairie people, seeking to preserve their culture and rights as their homelands came under increasing encroachment by the Canadian government. He led two resistance movements against the political sphere of the first post-Confederation Prime Minister, Sir John A. MacDonald. Riel has attained the revered status of a folk hero.
This operatic treatment is no dusty, linear history lesson, far from it. The angular, pulsating, often jarring score mixes indigenous influences with classical music trends of its time, evoking the sonic world of Stockhausen, Boulez, Penderecki, Foss, and Xenakis. Although I came of age in that era and heard numerous such recordings, I never had the pleasure of experiencing compositions of this school in live performance. With Louis Riel, I made up for lost time. 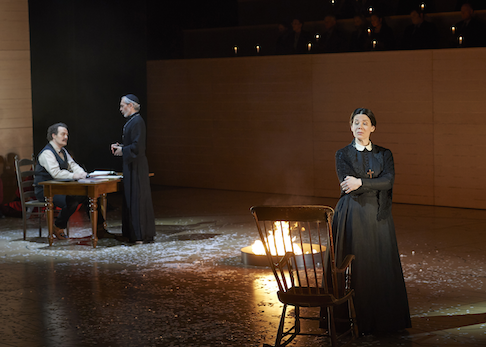 (l-r) Russell Braun as Louis Riel, Alain Coulombe as Bishop TachÈ and Allyson McHardy as Julie Riel [Photo by Michael Cooper]
A brilliant aural palette called for a virtuoso orchestra and demanded extremely wide-ranging vocal accomplishments. This was a riveting, engrossing immersion into a model of its genre. Not to say that there aren’t some dramaturgical hiccups in the episodic, presentational structure. But sweeping all before it is a haunting blend of a capella melismatic arias; disorienting percussive effects; searing brass stings; scraping, then soaring strings; flighty woodwind licks; and flawless choral work (Sandra Horst, Chorus Master). Under the assured, inspired baton of Maestro Johannes Debus, this added up to a pretty spectacular evening of first tier, nay, virtuosic music making.
But if there are three key elements to the evening’s success, they are: Russell Braun, Russell Braun, Russell Braun. (Did I mention Russell Braun?) The Canadian baritone is at the top of his game, and commands the stage with a nonpareil traversal of the title role. Tour de force is too puny a phrase to describe the magnitude of Mr. Braun’s achievement. He tears into the punishing role with a De Niro-like intensity and draws on a rock-solid vocal technique that he daringly pushes to its very limit.
This was the sort of “personal best” triumph that, like its subject, merits legendary status; an “I-was-there” performance that I will cherish as a gold standard of operatic excellence for years to come. I am a long time Russell Braun fan, and all his familiar strengths were on ample display: the pointed lyricism, the easy top, the smooth legato, the vibrant tone, the supreme control, the intelligent musicianship. What I could not have anticipated was the reserve of firepower he had at his command, and the heart-stopping emotional commitment that he was able to invest in this towering role assumption. His disjointed, unhinged, anguished Mad Scene that closed Act One was gut-wrenching its impact. The composer often crafts fiendishly high lying phrases for Riel that verge on Sprechstimme shrieks, and Russell negotiated them all with raw power. There is simply no aspect of the complicated vocal line or the complex characterization that eluded him. Unforgettable. Bravissimo divo! 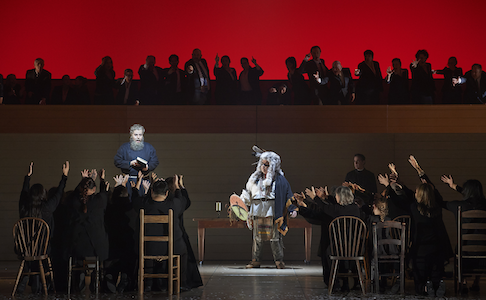 (l-r) Jean-Philippe Fortier-Lazure as Father AndrÈ, Everett Morrison as Wandering Spirit and Keith Klassen as Father Moulin [Photo by Michael Cooper]
He was decidedly not alone in his success. Please read the large cast list below, and please know that each and every one of this prodigiously gifted ensemble of Canadian singers made their solo appearances into a true star turn, wondrously sung and fervently acted. Moreover, their efforts congealed into a brilliant, evenly matched musical ensemble that would be envy of any opera company.
It may be odious to single out any of these players, but baritone James Westman was first among equals with his snide, snarling, overbearing, blustering, duplicitous Sir John A. MacDonald (think Donald Trump with high notes). Mr. Westman’s powerful, secure baritone has an easy high extension, and as he effortlessly rode wave after wave of cresting orchestral sound, he seemed more like the world’s next great Heldentenor in making. While most of the arias are given to Riel, his wife Marguerite has an extended solo to open Act III. Singing in Cree, virtually unaccompanied as she cradled their baby, soprano Simone Osborne lavished creamy tone and negotiated seamless register shifts in one of the opera’s longest, most accessible passages. This alluring, poised vocalist surely has a bright future.
Jean-Philipe Fortier-Lazure displayed a ringing tenor as Cartier, and Peter Barrett showed off a burnished baritone as Colonel Garnet Wolseley. The two of them collaborated with Mr. Westman for a gripping, argumentative trio, all tumbling phrases and shifting tonalities. Allyson McHardy brought a dusky, well-schooled mezzo to Riel’s mother Julie, and his sister Sara was well served by Joanna Burt’s agreeable soprano. The two women were especially fine as they urged Riel not to execute Thomas Scott, whose strident non-PC slurs were passionately delivered by Michael Colvin. Mr. Colvin’s characterful singing was exceeded only by the conviction of his acting. Although a slight graininess could creep into his extreme upper register when pressured, veteran bass Alain Coulombe created a sympathetic, tortured Bishop TachÈ.
Peter Hinton’s inventive staging could hardly have been bettered, as he seized on the concept of ritualizing the story telling. There was much use of religious prayer circles and other symbolic formations, all highly stylized and visually apt. Mr. Hinton had a willing story-telling partner in set designer Michael Gianfrancesco. Mr. Gianfrencesco gave him a minimalist marvel of a playing space, backed by an amphitheater of benches upstage, that could separate, elevate, you name it, and were revealed or enclosed at will by stage width flying dividers. False proscenium towers right and left completed the look, all of it handsomely executed in blond wood. 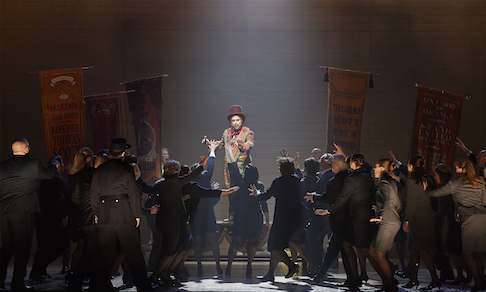 (centre) Andrew Love as Dr. Schultz [Photo by Michael Cooper]
This simple design was then filled with all manner of carefully chosen pieces and effects including a roaring fire pit, falling snow, imposing desks, and lots and lots of chairs. The latter were inventively placed, sometimes up-ended, cradled as dead bodies, and even used as “stilts” for actors to tromp around the stage like menacing spiritual forces.
The success of Bonnie Beecher’s sumptuous lighting design cannot be over-praised. With such a sparse scenic realm, her beautifully crafted illumination was critical in delineating the shifting moods and locations. Of especial impact were the bands of color on the upstage cyclorama that were ravishing in well-calculated cross fades from red to azure to fuchsia and all shades in between.
The wide spectrum of Gillian Gallow’s costume design immeasurably helped identify the large cast of disparate characters, and made them readily identifiable to the audience in this sprawling narrative. Ms. Gallow’s skillful choices include garish tartan plaid suits for the Canadian officials. As the indigenous people are gradually absorbed into the general populace, they morph from the bright red garb that made them unique, to all black modern attire indistinguishable from that worn by the chorus. Santee Smith’s haunting ceremonial choreography was an important component in Mr. Hinton’s masterful directorial vision, with lithe Justin Many Fingers moving evocatively as the Buffalo Dancer.
Before I saw this piece I must confess, I did not know who Louis Riel was nor that, some years ago, Harry Somers composed a knotty, disturbing, soaring, compelling, illuminating, moving, unique piece of lyric theatre about a national hero who should have international recognition.
The rapt audience received the production with roaring enthusiasm, knowing they had just participated in an artistic adventure with a seldom-performed work that may not come along again. This profound production of Louis Riel may not send you out of the theatre with a tune in your ear, but it cannot help but have planted a new appreciation of a hero in your heart.
James Sohre