Gone are the supernatural diversions and obfuscating sub-plots which
complicate so many of Handel’s libretti. Here, Antonio Salvi, drawing upon
Ariosto’s Orlando Jurioso, provides Handel with a blistering human
drama of envy and evil, which hinges on the supposed infidelity of the
Scottish Princess Ginevra who, loved by Polinesso, Duke of Albany, prefers
the noble Ariodante.

Despite receiving only eleven performances during its first season in 1735, Ariodante has long been admired as one of Handel’s finest operas.
The part of the hero Ariodante was written for Giovanni Carestini, who was
renowned for his versatility, virtuosity and fully working three-octave
range. Alice Coote – deputising in the European performances for the
indisposed Joyce DiDonato who will resume the role for the American leg of
the tour – matched Carestini’s fabled technique and sang with deep
commitment: this Ariodante was an immensely sympathetic hero, and the
emotional journey he experiences through the opera was laid bare.

In Act 1, Coote exuded regal confidence. Bold but dignified, Coote used her
gloriously rich, bronzed mezzo to convey Ariodante’s serenity and certainty
in ‘QuÏ d’amor’. As her lines floated freely, at times there was a
rhapsodic quality to the tone, almost Mahlerian; but, later, when suspicion
troubled her tranquillity, an urgency entered the strongly moulded arioso.
She used the text brilliantly in her Act 2 aria, ‘Scherza infida’,
communicating the bitterness, grief and devastation which spring from the
imagined betrayal of her beloved Ginevra; lutenist William Carter
wonderfully underscored Ariodante’s despair at the close. Having
demonstrated incredible stamina in this long aria, Coote flew through the
wide-ranging – literally and in terms of expressive breadth – and
astoundingly virtuosic ‘Dopo notte’ in Act 3. She doesn’t make it look
‘easy’ – indeed, she sings with her whole body and almost deliberately
seems to strive to convey the visceral intensity by making us notice the
vocal and physical demands, further deepening our awe. Coote may have
paired her stylish trousers with open-toed stilettos but, despite the
flowing blond mane and the sensuousness of her mezzo, there was a
convincing, and paradoxical, ‘masculinity’ about her anger. Or, perhaps it
was just that gender seemed irrelevant in the face of such consuming
despair and ecstasy. 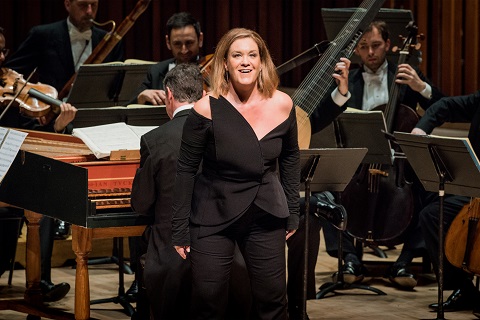 Coote’s stunning vocalism held us transfixed but she was out-strutted by
Sonia Prina’s dastardly Polinesso. Prina’s Iago-like persuasiveness and
prowling were utterly compelling. Visually, the spikes, killer heels,
tattoos and lace trousers over shorts were arresting, but the transgender
attire was also entirely at one with the dramatic integrity and naturalness
which Prina brought to the role. As she strode and slunk across the
Barbican stage, she drew the eye, dominating the drama just as the scheming
Polinesso coercively manipulates the naÔve, Dalinda, toying with her
affections so that she will carry out his ruse to make Ariodante believe
that Ginevra is faithless.

Prina seemed less concerned with the actual sound produced than with the
effect it could and would have – on Dalinda and the audience, equally. Some
of the coloratura was less than clean and at the top there was an
occasional harsh edge, but this mattered little, so thoughtful and dramatic
was the phrasing – the rubato, the ornamentation, the dynamic variety.
Prina allies rhetorical power with dramatic flexibility. Entirely off-score
throughout the evening, she encouraged and supported her fellow cast
members generously. 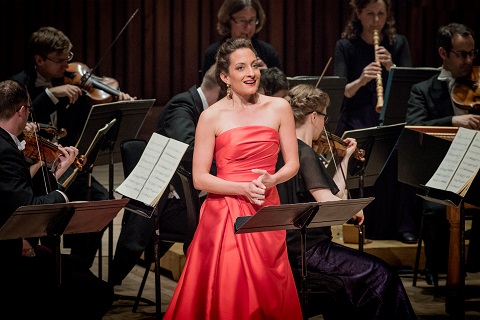 Christine Karg’s Ginevra was a cooler portrait of tender love and loyalty.
In fact, despite her silky scarlet dress which stood out so strikingly amid
the prevailing black, I felt Karg’s ‘ice maiden’ Ginevra would have
benefited from greater musical contrasts. But technically she was flawless.
Act 1’s ‘Vezze, lusinghe’ was poised and eloquent; Karg controlled the line
expertly and her soprano had well-defined colour and a strong core.
Ginevra’s quiet introspection was an asset, too, in ‘Il mio crudel
martoro’; condemned as a whore by her father, the King of Scotland,
Ginevra’s inner despair was palpable, immune to Dalinda’s consolatory
solace. Karg may not have tapped the full emotional range that Handel
offers, but this was a touching performance. And, her duets with Coote were
affecting for the way that vocally and dramatically they seemed to draw the
best from each other.

Mary Bevan, standing in at short notice for the indisposed JoÈlle Harvey,
held her own impressively alongside the more experienced singers.
Confident, characterful and with a nice range of colour, Bevan was a
surprisingly spirited Dalinda. Her soprano was powerful in ‘Il primo
ardor’, in which Dalinda deflects the smitten Lurcanio’s advances. Exulting
in the reward promised her by Polinesso, at the bottom her voice acquired a
mezzo-ish weight in ‘Se tanto piace al cor’. ‘Neghittosi or voi che fate?’
was a moving expression of regret and, reunited, Dalinda and David
Portillo’s Lurcanio sang a beautiful final duet which was one of the
highlights of the evening. 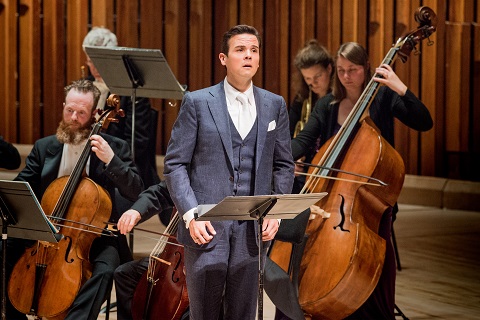 Portillo had already impressed in Act 2’s revenge aria, ‘Il tuo sangue’, in
which the tenor’s vocal athleticism served him well in passages of florid
anger, where Carter again provided strongly accented support. Prior to that
we had enjoyed Lurcanio’s warm profession of love, ‘Del mio sol vezzosi
rai’, and admired Portillo’s lovely clean, even gentleness.

Matthew Brook played the King of Scotland as benign, cultivated patriarch,
whose calm civility hides a deeper emotionalism which is distressingly
released when he hears of his daughter’s supposed dishonour. A little more
heft might have enhanced the regality, but the King’s disbelief was totally
credibly and the pathos of his grief heart-rending. Bradley Smith sang the
small, predominantly recitative, role of Odoardo with a sure sense of his
character’s function in the drama. 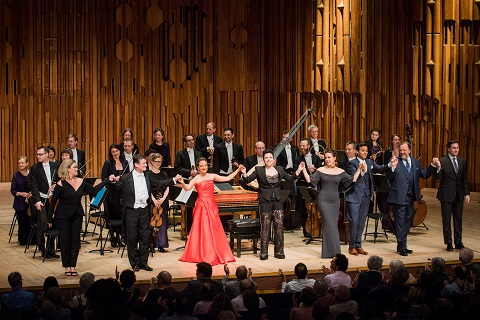 Bicket directed the small forces of The English Concert with economy and
precision: the barest, swiftest flick of the wrist was all that was needed
to bring about a change of colour or to usher a detail to the fore. The
instrumental sound was fairly light, though capable of poignancy as well as
brightness; it provided the singers with an airy support, and space to
project.

This was a ‘concert performance’ but many of the cast dispensed with scores
and stands, and the dramatic interaction was sustained and animated.
Shakespeare’s tale of jealous delusion ends in tragedy, but in Handel’s
opera covetousness and resentment are defeated by love. And, the
performance was a veritable triumph.

Rinaldo, with Iestyn Davies in the title role.