On June 9, 2017, Opera Las Vegas presented a traditional production of Verdi’s Rigoletto conducted by Music Director Gregory Buchalter with a cast headed by veteran baritone Michael Chioldi. Before the curtain rose, however, Artistic Director James Sohre presented a beautiful glass plaque to retiring General Director Luana DeVol. One of the world’s most successful dramatic sopranos and an able fundraiser, it will be extremely difficult to find a replacement for DeVol.
The Judy Bayley Theatre is a five-hundred-fifty-seat venue at the University of Nevada in Las Vegas. The stage is reasonably wide but it isn’t very deep, so singers could easily be heard from upstage. Designer Lily Bartenstein’s set consisted of shoulder-high platforms with stairs on one side and frames that turned open spaces into windows. Minimal but functional, they allowed Director Cynthia Stokes to tell her story. The Duke had his court, Gilda and her father an apartment, Sparafucile a workspace and Maddalena, as she herself sings, had no roof over her bed. 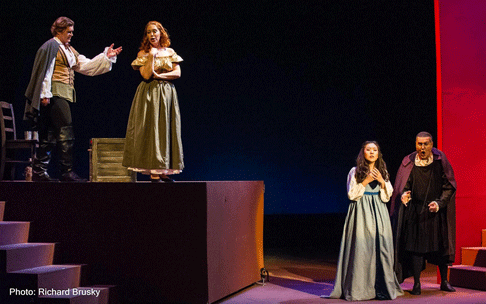 Kirk Dougherty as the Duke and Danielle Marcela Bond as Maddalena
Chioldi, a most convincing Rigoletto, was a man in psychological pain from the begining of the opera. His fear and his vulnerability to the whims of the nobility were evident in every meaty, well-colored phrase he sang. His sweet innocent daughter was his only joy, so when she was harmed he had nothing left. In his second act aria, “Cortigiana, vil razza dannata,” he lashed out at the courtiers with fiery tones that could have brought on his arrest, but he finished by revealing his heartbreak over the abduction of his daughter.
Kirk Dougherty was a robust Duke, both vocally and physically. A young, rich, athletic member of the nobility, no law could come between this character and pleasure. Onlookers could understand how he managed to fascinate Gilda. His Duke sang with brilliant, energetic tones that helped make the rendition of the famous quartet a delight. Having paced his performance well, he still had plenty of voice left for the final round of “La donna Ë mobile” that told Rigoletto the Duke was still alive.
So Young Park has all the technical skills Gilda demands and in this performance she combined them with the utmost in artistry. She sang her “Caro nome” with total clarity, liquid phrasing and a long trill that crowned the scene with tonal beauty. Park has a complete arsenal of coloratura skills that is hard to match.
A proud noble who had been condemned to death for having confronted Mantua’s most powerful duke, Eugene Richards was a commanding Count Monterone with a well-burnished bass-baritone voice. Bass Rubin Casas was a mean and evil Sparafucile who had no compunction about killing a nobleman. He simply said his fee was higher for a duke. He sang with rich dark sounds that helped evoke interest in his character.
Emily Stephenson and Michael Parham as the Count and Countess Ceprano, along with Marco Varela as Borsa and Travis Lewis as Marullo, filled out the Mantuan Court’s vocal riches. Stephanie Sadownik was a mendacious Giovanna and Danielle Marcelle Bond gave a fine rendition of Maddalena’s low-lying phrases.
Conductor Gregory Buchalter had a small group of instrumentalists to work with, but he drew a fine blend of Verdian sound from them. Together, they captured the work’s melodic greatness and its essential dramatic points, from its intense beginning and the forward motion of its many bright scenes to its culmination in darkness and death.
Maria Nockin