This lean, mean, darkly humorous lyric piece is based on Franz Kafka’s story as adapted by librettist Christopher Hampton and composed by the prolific minimalist Philip Glass. Its disturbing relevance proves at once contemporary and cautionary.
Josef K., you see, is being arrested for an unspecified crime. He is under constant observation, his every move is questioned; his every statement parried or parsed. Innuendo and supposition substitute for evidence. Swirling around him is an ever-morphing ensemble of quirky, murky grotesques.
The anchor of the production is the physically slight, vocally towering performance of Theo Hoffman as Josef K. Seldom off stage, Mr. Hoffman deployed his ringing baritone to tremendous effect, mining every nuance out of a wide-ranging, emotionally draining characterization. His beautifully internalized acting made K a wholly engaging personality, a sympathetic patsy whose victimization was first cruelly comical, then horrifyingly tragic. His beautifully modulated singing was even throughout all registers, and was as notable for its powerful bursts of indignation as for its introspective, whimpering cries of disbelief. Theo has created as thrillingly definitive a rendition of this central character as is likely possible. 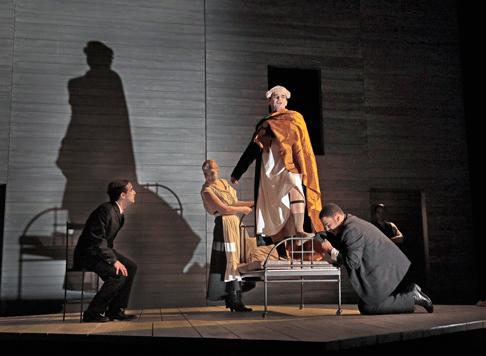 Theo Hoffman, Susannah Biller, Keith Phares, and Joshua Blue
And OTSL, being such a reliably renowned company, has surrounded their riveting star with an equally accomplished cast of supporting players, all of whom assume multiple roles with equal success.
Joshua Blue and Robert Mellon set the bar very high with their initial appearances as the arresting officers (Guards) with secure vocalizing, theatrical energy, and uninhibited comic business. Both had notable success in their “name” roles as Block (Mr. Blue) and the Priest (Mr. Mellon), the latter having a penultimate scene with K that drew powerful, unrestrained vocalizing from Mr. Mellon.
Matthew Lau’s weighty bass brought a smarmy gravitas to the Inspector, and a sinuous presence to Uncle Albert. Sofia Selowsky was such a free-wheeling, sexed-up Washerwoman, her stage antics almost upstaged her beautifully free, rich-toned mezzo. She also shone in her doubling as Frau Brubach and Woman. Soprano Susannah Biller offered silvery singing and detailed acting in the dual roles of . Fr‰ulein B¸rstner and Leni. The latter especially highlighted Ms. Biller’s gifts, allowing not only for awesome vocal flights but also gripping acting.
Keith Phares seemed to be having a field day with the triple challenges of the Magistrate, Assistant, and the bed-ridden (or is he?) Lawyer Huld. Mr. Phares’ fluid baritone is warm and ingratiating, and it has adopted a pleasing patina over the years. Brenton Ryan was a solid Berthold, and a willing Flogger (don’t ask), but his bright tenor and unrestrained acting chops really packed a wallop as the eccentric painter Titorelli. 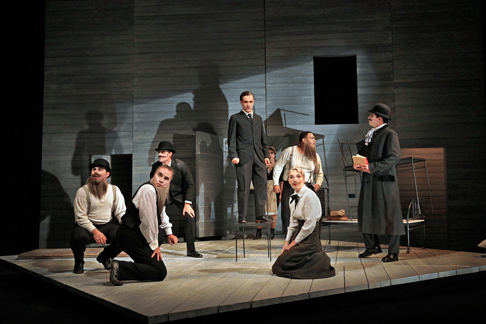 The cast of The Trial
The Expressionistic set and costume designs by Simon Banham were notable for their smart starkness and highly effective in their blunt simplicity. A square platform was placed like a baseball diamond right up to the edge of the pit. It was backed by a floor-to-ceiling wall, both constructed with rustic, light gray wooden planking. The wall has a high window, a couple of doorframes, and double barn doors dead center that open and close to reveal changeable insets.
Late in the show, the wall parts and tracks off stage, leaving only the island of the platform, almost “floating” against the all-black background. Costumes were mostly black and white, and clearly communicated each character. The brilliant lighting design was one of Christopher Akerlind’s best, with its intentionally limited use of color, and its incorporation of cock-eyed, disorienting trapezoidal projections. The simple combination of carefully selected furniture and its seamless incorporation into the staging were admirable.
Director Michael McCarthy has brilliantly harnessed all this talent into a tightly focused, beautifully controlled whole. He has seized on the Big Brother concept. When actors are not directly involved in a scene, they are observing, hovering, menacing in an intriguing variety of stage pictures. Mr. McCarthy has created an awesome ensemble with these singers, able to turn on a dime, serving as a solo character one minute, observer another, and set changer yet another, before plunging back into the action as a totally different character. This high level of ensemble playing simply does not happen without a skilled director of the caliber of Michael McCarthy.
And speaking of a “high caliber of ensemble playing” (and I was), Conductor Carolyn Kuan worked equal magic in the pit. Maestra Kuan elicited the all-important, pulsating, rhythmically precise orchestral execution, to be sure. She also drew an abundance of color from her players and singers alike, achieving a varied palette of satisfying musical effects. In a score that has a fair share of twitchy, angular components, Ms. Kuan managed to cue each and every entrance with an incredible accuracy.
The Trial may not send you out of the theatre humming a tune, but owing to this illuminating production, it cannot help but leave you challenged and changed.
James Sohre