Among the most often performed of Henze’s 14 operas is Elegy
for Young Lovers (Elegie für junge
Liebende), which premiered in 1961. Its popularity stems in part from
the libretto by W. H. Auden and Chester Kallman, which focuses on the
self-absorbed, amoral and sometimes sociopathic behavior of artists. This theme
has been an obsessional threat in opera over the past century: from Béla
Bartók and Paul Dukas’s Bluebeard operas to George
Benjamin’s Written on Skin.

In Elegy, Auden and Kallman dissect in precise and
painful detail how an artistic genus to fuels his artistic inspiration by
manipulating and ultimately sacrificing his associates, friends and lovers. An
imaginary Austrian writer named George Mittenhofer is spending the summer
in the mountains with his entourage. In the final act, he sends a young couple,
his former lover and her boyfriend (also his doctor’s son), out to die on
a mountaintop—all so he can create romantic poetry about their last
moments. The plot might seem unremittingly grim, yet at times the treatment
borders on farce, combining comic irony and personal tragedy in the spirit of
Hugo von Hofmannsthal, to whom it was dedicated.

Central to Elegy’s success is also the brilliance
of its score. Henze was a rebel. Like Benjamin Brittan, the other preeminent
European composer of opera in the quarter century after World War Two, he was a
radical critic of traditional politics and society in his home country,
embraced an alternative gay lifestyle at a time when few did so openly, spent
time in exile—and rejected the prevailing musical establishment. Henze
not only threw off the weighty legacy of Wagnerian romanticism, as everyone did
in those decades, but rejected the then sleek and politically correct
“new orthodoxy” of serialism as well. 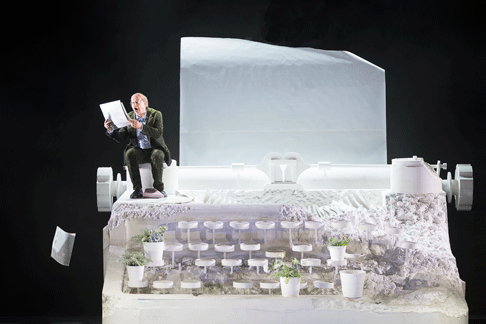 Yet Henze was nonetheless deeply embedded in the German and European canon.
No modern opera composer was a more versatile and assured craftsman. He wove
sonic tapestries from an eclectic mix of Mozart, Mahler, Brecht, Stravinsky,
jazz and much more—even the serialism he abhorred. All this is held
together not just by Henze’s extraordinary emotional exuberance, but also
by contrapuntal virtuosity, innate lyricism, rhythmic vitality, a keen ear for
timbre and other conventional musicianly virtues.

Opera offered particular fertile ground for Henze, perhaps because it
disciplined his exuberance. While his massive symphonies sometimes layer
clashing rhythms, timbres, tonalities and harmonies into a manic mass of sound,
he scored his operas for a lucid chamber orchestra. He is careful to delicate
instrumental timbres and renders almost all vocal lines intelligibly
singable.

To hear Henze, there is no place like the Theater an der Wien. It is the
oldest of Vienna’s three opera houses, founded in 1801 by Emanuel
Schikaneder, who wrote the libretto and sang Papageno in the debut of
Mozart’s Die Zauberflöte. Yet today the company bills
itself as “Das neue Opernhaus” (the new opera house). It aims
explicitly to present more challenging repertory and productions than the
celebrated Staatsoper up the road or the Volksoper around the corner. The
theater is well-suited to the task: it seats just 1000, with clear sightlines
warm and clear acoustics. And in Vienna people know their opera:
the house was filled for the final performance of the run, and to
judge from the conversations I overheard, filled with remarkably knowledgeable
spectators. 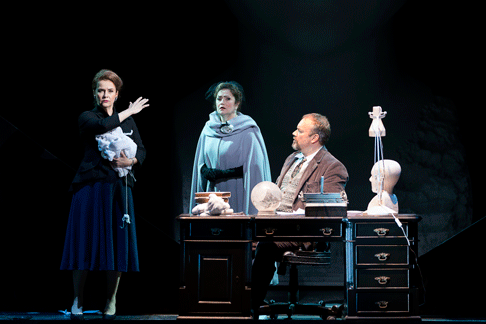 The world-class orchestra in the pit consisted of 25 players from the Wiener
Symphoniker conducted by the German-born director of the Dutch National Opera,
Marc Albrecht. (Albrecht comes by it honestly: his father, George Alexander
Albrecht, conducted a lot of Henze.) The musicians delivered a smooth and
sparking rendition of the score, with drive, virtuosity and Mozartian clarity
of line: even the soloist on the musical saw played with astonishing intonation
and tonal beauty.

Despite the vocal demands Henze places on them, great singers have
enthusiastically embraced his operas. While it is hard to match the casts
assembled for early performances of Elegy, which included
Dietrich Fischer-Dieskau, Elisabeth Söderström and Martha Mödl,
the Vienna cast was exceptionally strong.

The first voice one heard was that of soprano Laura Aikin in the role
of Hilda Mack, the older woman whose hallucinatory ravings about her
lost husband Mittenhofer had plagiarized in his poetry. Aiken is an American
who has sung in Europe for some years, specializing in modern music, and one
cannot imagine a more accomplished delivery of these difficult atonal
intervals—surely meant as a parody of “crazy” 12-tone
music.

Best-known of the cast members was Salzburg-born mezzo Angelika
Kirchschlager as Carolina, the aristocratically stern yet emotionally tormented
secretary to the great writer. Kirchschlager sang with warmth, expression and
precision, resisting until the last moments a direct emotionality that would
have been unsuited to the character.

The Danish bass-baritone Johan Reuter portrayed Mittenhofer, around
whose whims the rest of the cast organizes their lives. His
characterization was appropriately full-voiced, as befits someone
who sings German bass-baritone roles at top houses—including
Wotan in the much-discussed “Copenhagen Ring,” available on DVD.
Yet one missed the absurdly juxtaposed extremes of pomp and menace that define
Mittenhofer’s personality.

Innsbruck-born tenor Paul Schweinester, active in Vienna and elsewhere, and
Köln-born soprano, Anna Lucia Richter, brought fresh voices to the roles
of the young couple Toni and Elisabeth—and they looked the part. No
wonder they are rising young singers on the European circuit. Martin Winkler, a
Vienna-based singer who has performed much modern opera—I first heard him
in the Metropolitan’s recent Lulu—portrayed
Mittenhofer’s genially venal doctor Wilhelm Reischmann with clear diction
and a firm tone.

The theater also commissioned a new production and staging from the team of
Keith Warner and Es Devlin. Striking semi-abstract sets portrayed giant
snow-white replicas of objects found on a writer’s desk. The opening
tableau illustrates the approach: an empty black set with a white desk lamp
towering dozens of feet above a woman with a bowed head and a fancy floral hat.
One’s first impression—surely a deliberate analogy—was of an
insect under a microscope, but when she lifted her head, she was instantly
transformed into a middle-aged woman. Over the course of the evening, more
giant white objects were added, with actors clambered between and over a pile
of books, a reclining statue of a nude, a human head, and typewriter.

As occurs particularly often in German-speaking opera houses, the stage
director and set designer occasionally went over the top. In the penultimate
scene, for example, the objects (covered with white sheets) became a stormy
mountaintop, over which the two doomed young lovers scrambled. This was a
clever conceit, but it clashed with musical-dramatic moment, in which Henze
portrays the stillness and emotional innocence of their tender farewell in
deliberate juxtaposition to the artificiality and deception that surround them.
Henze would surely have criticized such a directorial choice as insufficiently
“music-driven”—a virtue he prized.