A Midsummer Night’s Dream
is a felicitous choice for this year’s Aldeburgh Festival as it was the
opera with which Britten opened Snape Maltings Concert Hall fifty years ago
in 1967. Since then, the Maltings have burned to the ground, been reborn
(in 1970), and undergone significant development while always remaining
true to Britten’s vision and ethos. But, the concert hall itself, wide and
lacking wings, is not the most accommodating space for opera. Jones makes a
virtue of a problem, and dispenses with the usual trappings of theatre –
set, props (bar a pendulous swing centre-stage), using digital projection,
colour, light and movement to conjure an eerie hinterland.

The deep-blue back-screen twitches with a filigree of cobwebs, leaves as
fragile as butterfly wings, and trembling droplets of dew on dandelion
threads; images which echo the woods and waterfalls of John Piper’s
original designs. It’s as if we are wandering through the botanical
woodcuts of an Elizabethan herbal. And, with the night come bees and
beetles, spiders and owls, busily spiralling or coolly perching. But, there
are other visual resonances too. Velvety petals unfold and sticky stamens
twitch with the sensuousness of Georgia O’Keeffe’s lilies; moreover, the
exquisite detail recalls Richard Dadd’s The Fairy Feller’s Master-Stroke with its mesmerising vision of
the microscopic secrets of the world sprites and spirits.

Spot-lit silhouettes mirror their subjects but, desynchronised movements
also teasingly elaborate and challenge. The foliage seems to stretch out
and enfold; figures drapes themselves in the leafy shadows. The disruptions
of scale and distortion of perspective blur boundaries between the real and
the fantastic. The overall effect is disorientating but mesmerising.

At the heart of this vision-scape is Iestyn Davies’ malevolent Oberon – a
silvery portrait of, paradoxically, stillness and wrath. Like an alchemist
skilled in secret arts, Oberon’s darkness is distilled in syrup of
love-in-idleness, drops of which splash and infuse the sleepers’ dreams.
This medic can both cure and harm, as the winding sinuousness of the snake
who ‘throws her enammel’d skin’ reminds us. Davies was initially a cruel
Oberon: the low range of his penetratingly precise countertenor resonated
with menace. But, disembodied against his silhouette, his voice had a
disturbing beauty which spoke of the fairy monarch’s passion for his
estranged Queen. Touched by pity for the doting Tytania, Oberon removes the
‘hateful imperfection’ from her eyes, and as the vocal line fell once more
in register, Davies’ imbued it with an expressive warmth, blending movingly
with the tone-clusters in the low cellos and double basses. 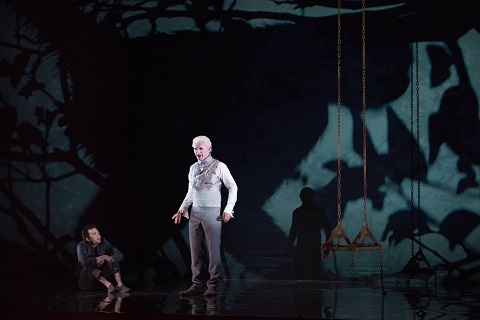 Like Prospero taunting Ariel, this Oberon dangles Puck on an invisible
magnetic cord, spitefully tugging, pulling and twisting his goblin servant
in meanness and rage. The acrobatic grace and physical responsiveness of
Jack Lansbury’s lithe Puck was breath-taking; this Puck was mischievous but
not malign, and his punishment – underscored by a vicious timpani roll and
stabs of gong, cymbal and xylophone – emphasised the heartlessness of the
imperious Oberon. 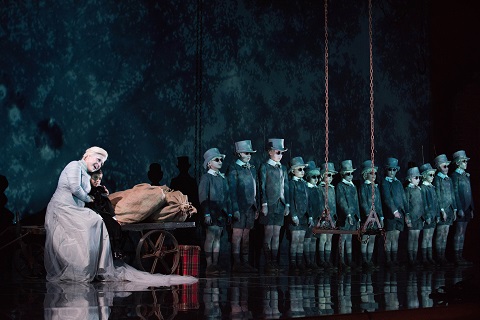 Jones’ fairy world is blanched of colour, drenched in silver light.
School-boy fairies in shorts, knee-high socks and top-hats, protect their
eyes with dark glasses, as they stand guard over the reposing Fairy Queen,
the disputed Indian boy a tiny black-frocked figure in their midst. The
boys of Chelmsford Cathedral choir sang their lilting lullabies and
heralded their mistress’s beloved Bottom with purity, sweetness and
strength. But, there was golden warmth, too, in the form of Sophie Bevan’s
gloriously luscious soprano which had the density of bullion and the
diamond-brightness of the stars. At the close of Act 1 when Tytania calls
her elfin brood around her and reflects on the ‘clamorous owl’ that wonders
at the ‘quaint spirits’, Bevan nailed the top C# with thrilling power,
running down the octave with the elegance of Oberon’s melismatic charms.
The besotted Tytania’s infatuation with the beastly Bottom was entirely
credible: ‘Oh how I love thee! How I dote on thee!’ was radiantly
soporific, burningly with monomaniacal passion. It was hard to know if such
love was ridiculous or sublime.

Jones’ projections in the mechanicals’ scenes – a mosaic of cogs and
buttons – alluded to their trades, and the rehearsals for their play were
fittingly downbeat: these were a pretty dull and maladroit bunch of
would-be thespians, lacking interest and energy and needing the bicycling
Bottom’s coercive enthusiasm to stir them to creative endeavour. Matthew
Rose was no buffoon, though his sonorous bass conveyed the weaver’s sense
of his own stature and worth; even when adorned with ass’s horn and tail,
and stripped to stockings and suspenders, Bottom was more a figure of
pathos than of ridicule, as he executed a nifty Morris dance to the
fairies’ percussive accompaniment. 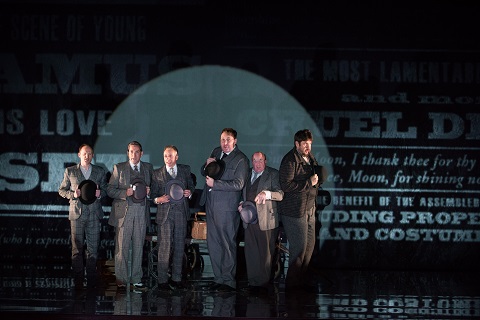 Act 3’s play-within-a-play is always in danger of being more ‘lamentable’
than comic, but Jones avoided too much hamming and dealt deftly with the
stage ‘business’ of moonshine, walls and lions: the rustics chimed
tunefully as a barbershop sextet, and though Snout (Nicholas Sharratt) and
Starveling (Simon Butteriss) looked as if they might break out into ‘Brush
Up Your Shakespeare’ they confined themselves to a quick toe-spin. Lawrence
Wiliford’s Flute avoided too many echoes of Peter Pears’ original Joan
Sutherland send-up, and Rose did not make a meal of Pyramus’ demise, adding
only one extra “die”, to the five expirations indicated in the libretto!

When, following a rehearsal, the mechanicals leave one of their carts
behind in the wood, it provides a bed first for Lysander, then Tytania and
finally for Bottom himself, thereby neatly linking three worlds. Awakening,
Bottom puzzles over his experiences: it is ‘past the wit of man to say what
dream it was’. Rose’s rendition of ‘Bottom’s Dream’ was a beautifully
expressive climax to the opera, his bass falling with a beguiling sway
through the descending thirds. Here it became clear that the weaver’s
synaesthesic confusion – ‘The eye of man hath not heard, the ear of man
have not seen’ – had been so perfectly embodied by Jones’ design.

In contrast to the albino fairies, the mortal lovers’ arrival is
accompanied by an injection of crimson red and verdant greens, the rustling
leaves shifting with sensuousness, and the striking palette complementing
the richness of the blended quartet of voices. The opera’s set pieces
belong to the Fairies and to Bottom though, and it was harder for the four
mortals to project the text (there were no surtitles), though there was a
good attempt to individualise and distinguish between the quartet of duped
beloveds. 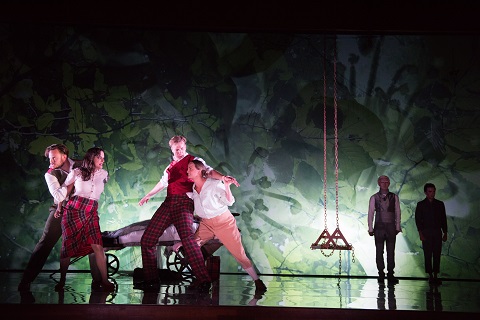 Nick Pritchard’s Lysander was earnest and his tenor had an occasional grain
which deepened the characterisation, while George Humphreys’s tall,
tartan-trousered Demetrius was forthright, sonorous and indignant. Clare
Presland’s Hermia flashed with fire during the exchanged of insults with
Eleanor Dennis’s Helena, the latter’s breeches emphasising her height
advantage over the ‘dwarfish’ Hermia, and the creamy richness of her
soprano winning our sympathy for the maiden spurned by Demetrius: ‘I am
sick when I do look on thee’. There were some welcome dashes of humour,
too, to lighten the belligerent resentment of the fairies’ feud, as when
Lysander’s struggles to lift his beloved Hermia’s suitcase, as they made
their escape from the oppressive Egeus, indicated that this eloper did not
intend to travel light.

The shift to the courtly elegance of the final act is always something of a
jolt; as if not just the characters but we too are awakening from the
compelling charms of the subconscious. Jones chooses to emphasise the
schism by presenting a stunning sunrise of complementary indigos and
oranges which brought to mind the vivid palette of Turner’s Dawn After the Wreck. White grid lines dissect the projection,
emphasising the artifice of the image – a fitting complement for Theseus’s
discourse on mimesis and myth. Clive Bayley was a stentorian monarch and
Leah-Marian Jones his feisty consort.

Conductor Ryan Wigglesworth gave the Aldeburgh Festival Orchestra a pretty
free rein, which allowed us to enjoy Britten’s orchestral mastery: celeste
and percussion were an uncanny presence during Oberon’s pronouncements, the
trumpet chirruped brightly during Puck’s escapades, the harps rocked with
tenderness as Tytania instructed her fairies to attend to Bottom’s every
need. This is a score I know well but there were still many places where my
ear was caught by a fresh detail or colour. The lethargic glissandi which
penetrate the score had the deep-breathed absorption of sleepy oblivion,
but the richness and urgency of Wigglesworth’s account did at times make it
difficult for the singers to get the text across.

But, leaving the Maltings, bathed in the serene glow of the full midsummer
moon, I felt that I had been truly bewitched.