The two Rigoletto’s were clearly evident, that of its protagonists in the persuasive lyricism of the jester and his daughter and the Duke of Mantua, and that of its clumsy dramatic rhetoric — the curse of Monterone. British stage director Rob Kearney, working in the 20 year-old sets designed by Michael Yeargan (SFO’s current Ring among countless others), exploited Yeargan’s minimalist abstractions of neoclassic architecture and blocks of primary color to frame Verdi’s actors in abstracted, often long sustained dramatic poses when not responding to the commotion of the courtiers in detailed lazzi (commedia dell’arte staging tricks) by four dancers. 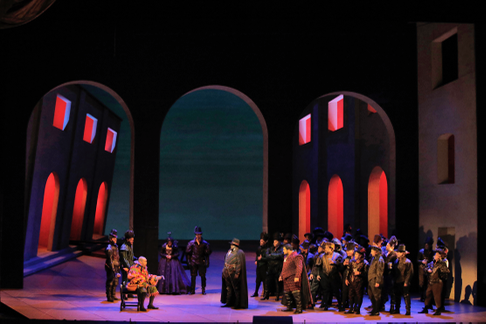 Respecting a (i.e. my) perceived Luisotti dictum director Kearney moved the action into and out of the downstage areas easily controlled by the maestro’s baton. In this splendid evening however it was evident that three powerful artists had the maestro in their thrall. This synergy created what may have been conductor Nicola Luisotti’s finest hour at San Francisco Opera as he led an impeccably measured exposition of Verdi’s early middle period opera as pure bel canto.
Beautiful singing is basic to Rigoletto as its basic emotions are beautiful and very human — the love of a father for his daughter and the freshness of youthful desire. Baritone Quinn Kelsey, once a Merola participant and then a house singer at San Francisco Opera, has matured into a formidable bel canto artist, able to discover larger and longer contours in Verdi’s musical lines and to manipulate the inherent emotion of text without breaking line. Now in his vocal prime, Kelsey possesses a strong instrument of golden tone he has placed in service to high style. 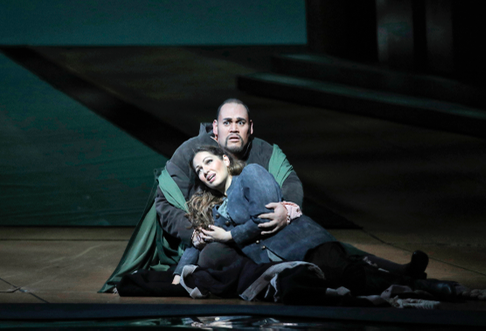 Quinn Kelsey as Rigoletto, Nino Machaidze as Gilda
Soprano Nino Machaidze has a warm maturity of voice and a command of style that goes far beyond the innocence of Victor Hugo’s young victim. It was her intelligence that thrust this performance to a musical plateau where anything is possible, in this case a virtual musical embodiment of an adolescent girl gilded in magnificent sound. It was this ideal of bel canto that gave unique definition to the drama of this Rigoletto.
IngÈnu tenor Pene Pati is purely and simply the vocal embodiment of the Duke of Mantua, possessing the vocal swagger, the freshness of voice, and the creative energy that makes the Duke, indeed all youth, lovable. The artistic achievement of this debut in a major role on a major stage was formidable, this young artist fusing surprisingly graceful stage movement with nearly impeccable vocal delivery. And there was solid tenorial attitude. Aplenty.
These three artists inhabited their musical worlds to the fullest. It was the collision of their worlds that created high operatic drama on the War Memorial stage, and proved, as does happen every so often, that opera is the most rarefied and distilled of all theatrical worlds.
If conductor Luisotti’s pit was devoid of all exaggeration, so was director Kearney’s stage, the melodrama of Monterone’s curse was defused by placing it always front and center and always thundering it in the voice of bass Reginald Smith, Jr. Nothing more. The fulfillment of the curse was relegated to the shadows. Andrea Silvestrelli in his signature role as Sparafucile, emerged from the darkness from time to time to realize the Monterone’s vengeance. Maddalena, sung by Adler Fellow Zanda äv?de appeared only in the dim environs of his inn and then only to satisfy the Duke’s desire. Nothing more.
San Francisco Opera resident lighting designer Gary Marder created a mottled darkness that permeated the evening, offset from time to time by saturated blocks of primary color. Mr. Marder’s lighting discovered entirely new atmospheres for this old production, atmospheres that were instrumental in upholding the intense musical level of this remarkable evening. Even the Yeargan set was swept up in the musicality, when required its elements changed position, motion seemingly initiated not by mechanics but by the sheer power of the music. Gesamtkunstwerk indeed.
Luisotti’s orchestra played with requisite finesse, the lower strings elegantly grinding gutsy drama into Rigoletto’s realization that he had been tricked, solo wind instruments suavely adding subtle feeling to arias ‡ la Rossini. Kelsey Quinn’s “Cortegiani” acquired an unusual sophistication in tones that moved us, and moved the resplendent San Francisco Opera’s courtiers to back off, thus creating a quite powerful emotional vista — amply rewarded with prolonged applause.
Michael Milenski