Not a festival goes by that OTSL does not present a world premiere, U.S. premiere, or an important second look at a recent notable composition, in this case Ricky Ian Gordon and Michael Korie’s The Grapes of Wrath.
Based on the celebrated Steinbeck novel, the sprawling masterpiece would seem difficult to tame. The Tony-winning play version produced by Steppenwolf Theatre Company succeeded, but even without music the show was overlong and occasionally hard to follow. The risk seems to be in trying to include too much.
Gordon’s Grapes premiered at Minnesota Opera in 2007 in a lengthy three-act version. In the intervening years, the creators have tightened the narrative considerably. The current two-act version distills the story to all the big moments strung skillfully together with well-defined character relationships and spare, meaningful dialogue. Thrilling choral moments lend an epic, almost cinematic sweep to the piece, elevating and ennobling the human suffering of the humble characters. 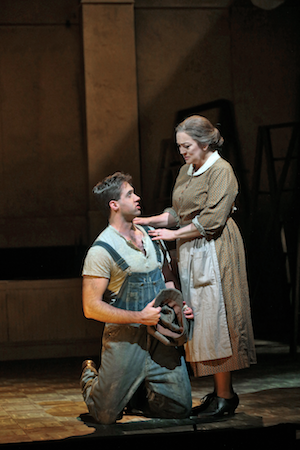 Tobias Greenhalgh as Tom Joad and Katharine Goeldner as Ma Joad
Mr. Gordon’s evocative, sometimes eclectic score is inspired by many another composer’s sound palette, including Copland, Bernstein, and Sondheim. Indeed some of the jauntier, folksier numbers recalled a miners’ number from Sondheim’s recent musical about the Meizner Brothers. (Or is it vice versa?) But no matter, Gordon has amalgamated these divergent influences and made this score sing with his own voice, thank-you-very-much. Orchestral writing is in turn varied, atmospheric, soaring, pulsating and colorful, and the vocal lines are grateful and illuminative of the characters’ outward plight as well as their inner feelings.
James Robinson has no equal when it comes to directing such sprawling, episodic contemporary works, and he has once again covered himself in glory as he drew the large ensemble into constant focus even as scenes and situations were in constant flux. When the action settled into an introspective aria, or a sensitive duet, Mr. Robinson deftly framed the moment to create a successive string of pearly ‘set pieces’ even as he preserved the forward motion of the narrative.
Set Designer Allen Moyer has provided an omnipresent soup kitchen as an overall metaphor, an environment in which all the various locales are suggested. As the audience enters the theatre, much of the cast is seated at tables in a parish hall, others loiter and converse in various groupings. A stage with US flag and red grand drape such as is often found in such venues, is up center. As the focal point, this platform is continuously re-dressed effectively to support many imaginative effects.
The cast constantly moves furniture and set pieces about with choreographed precision. At first, I wasn’t sure I was going to enjoy this rustic approach, and the first few scenes did not give me a good sense of time and place. I was won over in very short order, largely owing to the nonpareil lighting design by Christopher Akerlind. 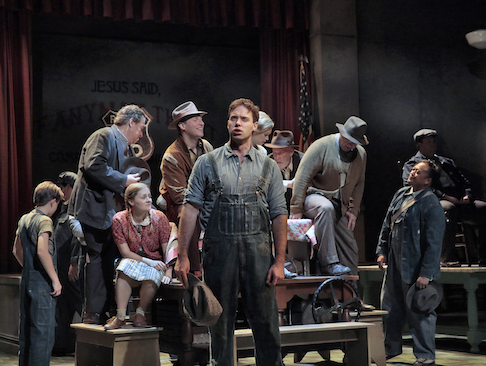 (Center) Tobias Greenhalgh as Tom Joad
If I haven’t ever said before that Mr. Akerlind is a company treasure, I should have. His arsenal of effects was the beating heart of the physical production. To name just one heartrending visual: When slow-witted son Noah decides to drown himself to rid his family of the burden to feed him, he first “wades” in wash buckets lit from within. A large white cloth swoops in to cover him as he climbs on the platform. The cloth rises in front of him, and an intense blue spot backlights him as he ‘drowns’ as a floating shadow. All this is complemented by Ma Joad in an isolated special down right, sitting in a rocker with the infant Noah in her arms, a flashback to when she crooned him to sleep not that long ago. So searing, so simple, so profound.
Over the years, costume designer James Schuette has often dazzled us with attire of ravishing beauty. Here, he engaged us with a panoply of earthy, practical period street wear, work clothes and uniforms that aptly communicated the characters’ station in life. Is there room for a company to have two “treasures”? Hell, yes.
In the pit, Conductor Christopher Allen ruled with a sure hand and a full heart, wringing passion and pathos out of his musicians in equal measure. Maestro Allen not only embraced the sweeping cinematic phrases, he also injected sass and wit into the folk-like sections. Best, he managed to support and propel the soloists as they strove unrestrained to reach the emotional jugular in their arias and confrontations. He expertly shepherded the opera’s immense forces, including Cory John Franklin’s meticulously prepared chorus.
In the afore-mentioned Broadway play version of Grapes, Tom Joad got the last star bow. Here, Ma Joad was given that honor. It is easy to see why. While the piece is Tom’s journey (and he has one of the most famous inspirational speeches in all literature), Gordon, Korie, and Robinson have clearly made Ma the guiding force and (pace Steinbeck) I am convinced they are right. 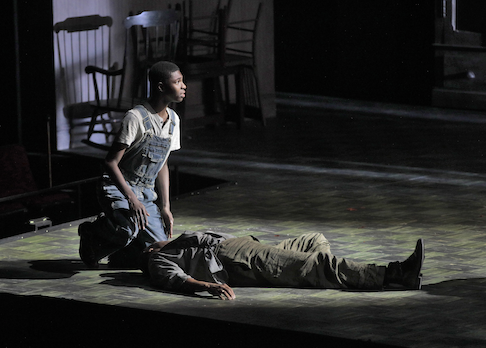 Nathaniel Mahone as The Boy in the Barn
This role was such a perfect fit for Katharine Goeldener’s interpretive gifts, it is hard to know where Ms. Goeldener ended and Ma Joad began. Her Earth Mother presence swept all before it, barking orders one moment, comforting the sick another, healing the hurt as needed, and above all, trying to claw the family together with finger tips of steel. Here is a skilled vocalist with a sound technique who knows what her large, pointed mezzo-soprano can (and can’t) do. She takes some thrilling risks, pushing the voice for dramatic effect, and the results are often electrifying. But Katharine can also draw you in with sustained, floated pianissimi, so private and delicate that she breaks your heart. It is not often we are privileged to witness such a perfect marriage of artist and role.
In the same league, Tom Joad might have been written for baritone Tobias Greenhalgh, who dispatches the rangy role with solid commitment and vibrant vocalization. Mr. Greenhalgh has power to spare, but I did wonder if some of the role’s middle voice passages might not be too densely scored, especially if the piece were given in a larger house. Tobias’ sincere acting, handsome presence, pointed diction and strikingly rich voice made for a powerful impression, none more so than in his memorably sung I’ll be there aria.
Deanna Breiwick was an enchanting presence as Rosasharn. Her secure, silvery soprano floats effortlessly above the staff (and everywhere else, for that matter), and her slight physique and poised singing make her totally believable as the love struck, pregnant young wife. She infuses the opera’s final moments with such heart and hope and humanity that the tears I had been fighting for about the last twenty minutes came flooding like the ravaging rainstorm onstage.
As the Paterfamilias, Levi Hernandez brought tragic authority to Pa Joad, his rolling baritone a comforting presence. Geoffrey Agpalo creates another deeply affecting impersonation as Jim Casy, a former preacher with cheeky observations about life and living. His delectable lyric tenor was suavely deployed, and his opening aria accompanying himself on ukulele was a highlight. Andrew Lovato made the most of his stage time with a neatly sung Connie Rivers, Rosasharn’s restless husband. Mr. Lovato and Ms. Breiwick’s two duets were beautifully rendered, their effortless youthful timbres blending seamlessly.
Michael Day’s petulant Al Joad was wiry in demeanor, but smoothly sung with an assured, honeyed tenor. The waitress Mae has the most musical comedy-like aria with her humorous commentary on truckers and tipping, and Jennifer Panara delivered it with panache and a gleaming mezzo. Veteran Robert Orth used his experience and sometimes, sheer force of will to limn a memorable portrait of the crusty drunkard Uncle John.
Truth to tell, there was really no vocalist who did not excel in the many assignments they essayed. Please read the cast list below and know that each and everyone of them gets a personal bravo from me.
With this performance of The Grapes of Wrath, which closed the 2017 festival, I mused that this year’s four operas were perhaps the finest collection of my many OTSL experiences. While this will be a hard act to follow, I already can’t wait for what comes next.
James Sohre

The English Concert at Wigmore Hall: Purcell and Blow