That is not to say there weren’t some distinctive touches. But here was a tradition-honoring, dramatically safe production of an evergreen classic that was first of all cast from strength. Cio-Cio San is a “big sing” and Rena Harms proved more than up to the task.
This, in spite of the fact that Ms. Harms was announced as indisposed with allergies. Since Cio-Cio San begins singing offstage, there is an especial emphasis on her voice alone, and owing to the circumstances, the first impression was that it was a bit guarded. Once she entered, we were able to observe that Rena is physically ‘right’ for the role, able to suggest a waif-like fifteen-year-old. In Act One, it seemed that she might be pacing herself, and her limpid soprano was prone to a slight flutter. That could also be owing to her affectation of innocence and naivetÈ.
Beginning in Act II, Ms. Harms really began to rally and go from strength to strength. Un bel di was touching and full voiced, and a spinto sheen began to evidence itself. Act III evolved into a no holds barred finale, with the diva hurling out full-throated, impassioned phrases that thrilled the ears and stirred the heart. The totality of her achievement was overwhelming, and the audience rose to their feet as one to laud her with an especially vociferous ovation. 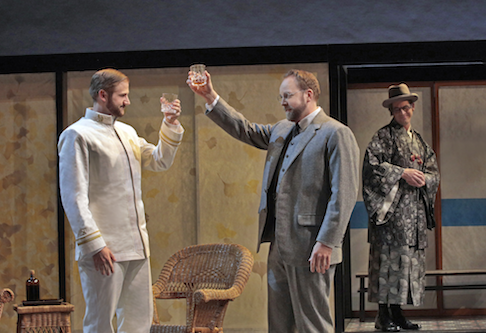 (L to R) Michael Brandenburg as B.F. Pinkerton, Christopher Magiera as Sharpless and John McVeigh as Goro
Michael Brandenburg was a smarmy, self-interested Pinkerton, nevertheless tall and handsome with a clear, muscular tenor. When he wasn’t ringing out over the full orchestra, he caressed his phony protestations of love with honeyed faux conviction. He also injected a tone of characterful cynicism into his early scenes that indelibly defined him as one of opera’s biggest cads.
It was wonderful to hear Christopher Magiera again. His mellifluous, burnished baritone has taken on new weight since last I heard him, and he brought gravity and a sympathetic, bungled paternalistic concern to Sharpless. Mr. Magiera’s assured presence and luminous vocalizing were one of the evening’s great strengths. RenÈe Rapier was also luxury casting as a potent Suzuki. Ms. Rapier’s plummy mezzo radiated authority and her poised singing was a perfect partner for Ms. Harms, the two melding beautifully in their duet. 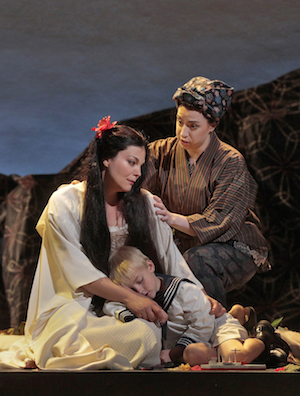 (L to R) Rena Harms as Cio-Cio-San, Sam Holder as Sorrow, and Renee Rapier as Suzuki
John McVeigh has a striking lyric tenor voice, but here he effectively subdued its polish to make Goro a mean-spirited, manipulative moneygrubber. Matthew Stump was an imposing, firm-voiced Bonze; Benjamin Taylor a somewhat stoic, though beautifully sung Prince Yamadori; and as Kate Pinkerton, Anush Avetisyan’s distinctive soprano contributed a pleasantly contrasting vocal quality.
In spite of the director’s program notes, Robin Guarino did not seem to re-define the roles of the three named women characters as much as she aspired. What Ms. Guarino did achieve was a cornucopia of effective business that helped define the established characters, as well as developing illuminative subtext that allowed them occasionally interact in fresh ways. She devised effective stage pictures and well-motivated movement, although the love duet curiously reverted to rather stock pairing poses.
Laura Jellinek’s set design was well considered, the upstage mountain appearing to be made of an origami collage. The house was positioned on a turntable to be able to suggest the “public” and “private” life of the heroine. This worked better at some times than others, and the long, flat structure got visually tiresome after a while. Too, there were times that it was turned and slightly angled to no real effect. Still, the suicide “inside” the house, followed by the revolve to allow Butterfly to stagger out the “public” side of the house superbly underscored the final effect.
Candice Donnelly devised and assembled a splashy, colorful set of costumes for the wedding, as well as more subtle, subdued garb for the principals. Tom Watson’s lovely, comprehensive wig and make-up design was notable for a tasteful lack of clichÈs. Christopher Akerlind’s reliable lighting provided the finishing touches to the look of the production. 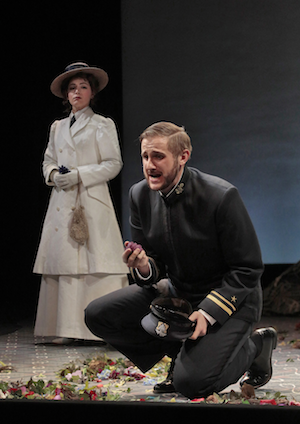 Anush Avetisyan as Kate Pinkerton and Michael Brandenburg as B.F. Pinkerton
Michael Christie started off like gangbusters in the opening fugue, with a crackling downbeat. His urgent, breathless beginning soon mellowed out, and by the time we got to the expansive love duet, the Maestro’s pendulum seemed to have swung to the more languid realm. Whatever the tempi, Mr. Christie clearly knew what he wanted, and boy, did he get it! In the small Loretto Hilton theatre, the full scope of Puccini’s orchestral colors had a stunning immediacy, and his partnering with the singers was impeccable. Cary John Franklin’s chorus performed with its accustomed distinction.
In total, OTSL lovingly served up this timeless classic with an accessible translation, top tier talent, and conviction in a fool-proof formula that allowed Madame Butterfly to be a soaring achievement.
James Sohre