There are plenty of ‘on-a-budget’ opera companies who regularly show that a
lot can be made of not very much, so the scanty set and properties in the
first-half sequence – a few chairs and tables, a dozen champagne glasses, a
bucket of cherries – were not in themselves a problem. Matthew Mulberry’s
lighting design was economical and effective. The Byronic gloom of Jacopo
Foscari’s prison cell was effectively conjured by a single hanging lamp;
Prince Charmant’s palace bathed in a pink glow, while a cooler blue illumed
Arabella’s fraught exchange with Mandrynka.

The direction, however, was minimal and too often the singers seemed to be
‘hanging about’ wondering where to move next, singing straight to the
house, or into the wings or back-cloth, rather than at or to each other,
even though each of the first-half items presents an intimate, charged
exchange. The diction was also, generally, poor with almost no discernible
distinction between Italian and French. 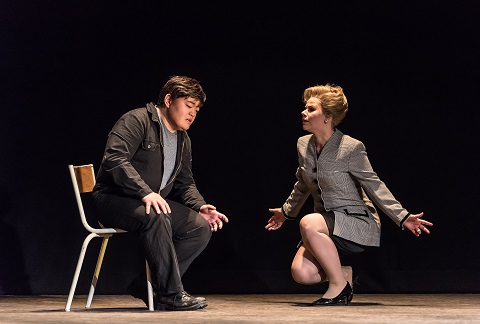 Fortunately, there were several names that have become well-known over the
last year or two from their performances in minor roles in the House, and
engagements elsewhere, and their appearances in more substantial fare were
eagerly anticipated. Opening the programme with the Act II duet from
Verdi’s I due Foscari, Vlada Borovko confirmed my previous
impression (not least in last year’s

and most recently in the ROH’s


) that she is a soprano of dramatic power and commanding presence, well
equipped to master Verdi’s surging vocal lines. She was a stirring
Lucrezia, comforting David Junghoon Kim’s Foscari when he learns of his
exile and conveying the full fierceness of Lucrezia’s love for her husband
and fiery scorn for the scheming clique, the Council of Ten. Later, when
the ensemble came together for the end of Act 2 of Don Giovanni,
Borovko displayed similar concentration and intensity in Donna Anna’s ‘Non
mi dir’.

confirmed – and here he was convincing as the tortured Foscari who is being
tormented by delirious visions of the ghost of the decapitated mercenary,
Carmagnola. He sang with clean, appealing tone, though he might have
employed a wider dynamic range.

The tenor hasn’t yet quite got the refinement that Rossini’s music calls
for and he seemed less comfortable decked up in habit and wimple as ‘Sister
Colette’ – the disguised Count Ory who falls into the trap set for him by
his page, Isolier, and finds himself in a darkened bedroom making advances
to the latter rather than the object of his unwelcome affections, Countess
AdËle. Comic timing is not Junghoon Kim’s forte, and it didn’t
help that the staging of this trio – which Berlioz described as the
composer’s ‘absolute masterpiece’ – lacked a certain jeu d’esprit,
the only (mild) chuckles coming from the somewhat clichÈd wriggling under
the duvet and climbing under the bed.

The trio of singers didn’t ‘play off’ one another with sufficient zip, and
conductor James Hendry let the tempo lag, failing to show how the
orchestral rhythms point up the dramatic charm and wit. The enunciation of
the French text was weak, but there was some attractive singing from Angela
Simkin whom I admired in the title role of


at Wilton’s Music Hall in 2016, and who displayed a firm technique and
vocal gleam as Isolier. This followed her stylish appearance as Prince
Charmant in Massenet’s love-at-first-sight duet, ‘Toi qui m’es apparue’,
alongside Kate Howden’s Cendrillon. Howden, standing in at short notice for
the indisposed Emily Edmonds, did well to shape Massenet’s lines with
simple elegance. She coped well at the top and her fresh sound blended
pleasingly with Simkin’s slightly fuller mezzo. 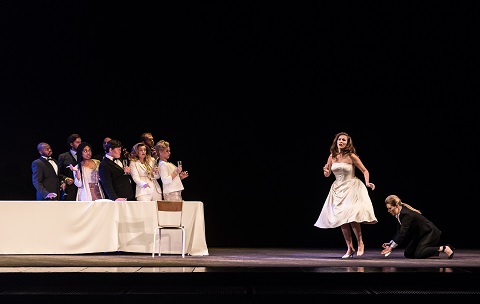 Soprano Francesca Chiejina was the third of Rossini’s comic threesome but
she needed rather more vocal presence to communicate AdËle’s impish sense
of fun. Chiejina had appeared a little tentative in her earlier guise as
Suzel in the ‘Cherry Duet’ from L’amico Fritz – another comic gem
which fell rather flat, missing the sparkle which imbues Mascagni’s
trifling operetta – and her intonation strayed a little at the start. She
has a sweet tone but doesn’t always project with enough dramatic vigour. As
Fritz, Thomas Atkins did impress, however. Atkins studied at the Guildhall
School of Music and Drama, and when I heard him sing Florindo in the 2015
production of Wolf-Ferrari’s


I remarked his ‘incipient Italianate gleam’, a quality which has now
bloomed nicely. His ‘Il mio tesoro’ in the post-interval Don Giovanni episode was the highlight of the evening, revealing a
well-supported lyric tenor and an ability to imbue a character who can seem
weak-willed and ineffectual with convincing strength and integrity. 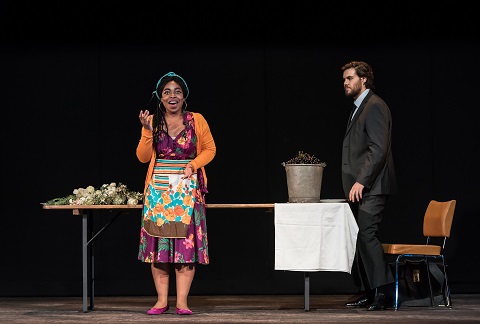 The other first-half item was the final duet from Strauss’s Arabella. As ever with Strauss, the writing lies quite high and
Jennifer Davis, as the eponymous aristocrat, scaled the peaks but could not
colour them with the requisite silvery tone, and this deprived this
exquisite reconciliation scene of its transcendence. A similar heft, and
tonal hardness, was apparent in Elvira’s ‘Mi TradÏ’. 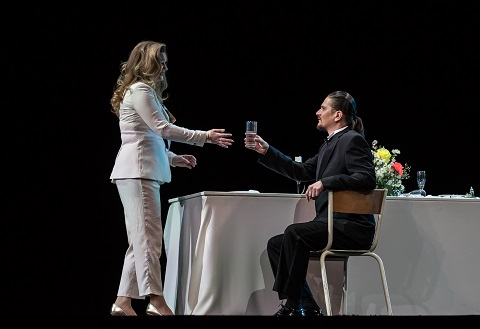 Perhaps it’s hard to invest the foolish Mandryka with any real credibility
but Hungarian baritone Gyula Nagy needed a bit more focus to supplement the
warmth of his sound in order to capture the dignity of the close. The
absence of a staircase down which Arabella famously glides to her lover –
to make the formalised gesture of offering the glass of water that signals
her willingness to be her betrothed’s wife – was understandable and
forgivable; what was less acceptable, however, was the lack of any
convincing engagement between the reunited lovers.

Director Gerard Jones had put more thought and effort into the staging of
the final scenes of Don Giovanni, and it paid off, as the simple
set – a white-walled chapel where the Commendatore’s ebony coffin served as
an unavoidable reminder of the Don’s dastardly deeds and impending doom –
brought the singers together with more dramatic involvement and
integration. Haegee Lee, who joins the JPYA scheme next season, took the
role of Zerlina – intended for Edmonds and acted by Alicia Frost – singing
from the side and revealing a good sense of Mozartian style which bodes
well for her appearance as Papagena in the ROH’s new staging of Die Zauberflˆte, directed by David McVicar, in the autumn. Simon
Shibambu was a stentorian Commendatore but softened his tone effectively
when doubling up as Masetto. Gyula Nagy was a fittingly disreputable
Giovanni, and interacted well with David Shipley’s rich-hued Leporello. 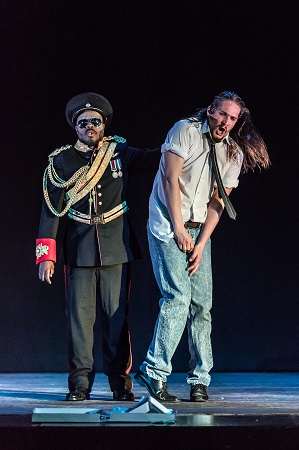 This staging gave Don Giovanni the last laugh. After the moralising finale
and departure of the ‘victors’, the coffin in which Giovanni had been
entombed raised its lid, and the chancer seized his opportunity, scampering
off with a look which hinted, ‘I’ll be back’. So, too, will many of these
young singers in the forthcoming ROH season, alongside six new Young
Artists: Haegee Lee and fellow soprano Jacquelyn Stucker, mezzo-soprano
Aigul Akhmetshina, tenor Konu Kim, baritone Dominic Sedgwick and stage
director Noa Naamat.

Further details of the ROH autumn season can be found at