With his traditional staging and dress, McVicar brings to life the grotesqueries of a Renaissance libertine court. Due to the censors of the time, Verdi had to relocate Rigoletto in Italian Mantua, but he based his opera on Victor Hugo’s “The King’s Amusement” that recounts the life of libertine King Francois I. The lighting and ambience of McVicar’s adaptation was hauntingly eerie, even though some of the singers couldn’t master the Castle’s acoustics. Mostly, though, the Finnish soloists offered the greatest quality in singing.
Manolov proved a sensational Rigoletto spanning a wide spectrum emotion. As a giant hunchback on crutches and covered in black leather, he appeared more a monstrosity than a court jester. Manolov sang full-blooded about his despair in his desire for his daughter’s safety, or of his anger towards the Duke and his court (unleashing a fury for kidnapping his daughter in “Cortigiani, vil razza dannata”). Before he is cursed by him, Manolov delivered biting wit in his rant against Monterone.
Juha Pikkarainen performed Manterone with deep, rounded sonority, especially in his grand entrance through one of Olavinlinna’s side portals. In the beginning, Pikkarainen easily overshadowed Lahaj’s Duke of Mantua.
In the beginning, Rame Lahaj’s Duke of Mantua worried me. As McVicar’s display of libertine syphilitic licentiousness (with young men howling like rabid dogs and coÔtus coerced on Monterone’s daughter) took over the stage during the overture, the orchestra in full force led by Philippe Auguin, overpowered Lahaj’s voice. His “Questo o quella” lacked body and was almost inaudible; he failed to hold his own amongst the terrific choir (in scattered sexual acrobatics on stage). I was worried I was in for some poor singing tonight. 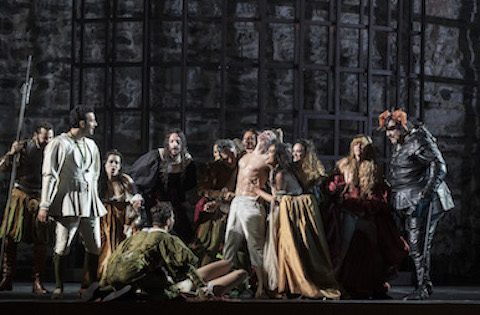 Lahaj and Manolov as Mantua and Rigoletto amused by the court’s licentiousness
But I was wrong, Lahaj seemed to be saving his voice for his solos later and for his duets with Gilda. During his “La donna Ë mobile” in the Final Act, with Auguin toning down the orchestra’s volume, he sang decently, yet it still not was the Verdi showstopper I was hoping for. On the other hand, in his vocals with Gilda he managed sensitive dramatic chemistry during the quieter orchestral passages. 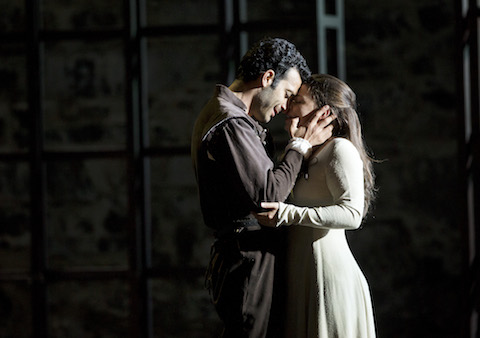 Lahaj and Takala in sensitive romantic chemistry
Gilda’s “Caro Nome” put Tuuli Takala’s lyrical coloratura up to full display. Her high notes were so pure and radiated innocence. Even when the speedboats jetted over the lake outside and disrupted her singing, Takala would amp her vibrato not letting anything interfere in her declarations of love to her father or the Duke. As Giovanna, Merja M‰k‰la offered beautifully grounded contrasts to Takala’s transparent vocals.
Manolov and Takala made an excellent pairing as Rigoletto and Gilda, in their father and daughter relationship. Their duets made believable and deeply moving. In their chemistry, two singing actors created great drama. 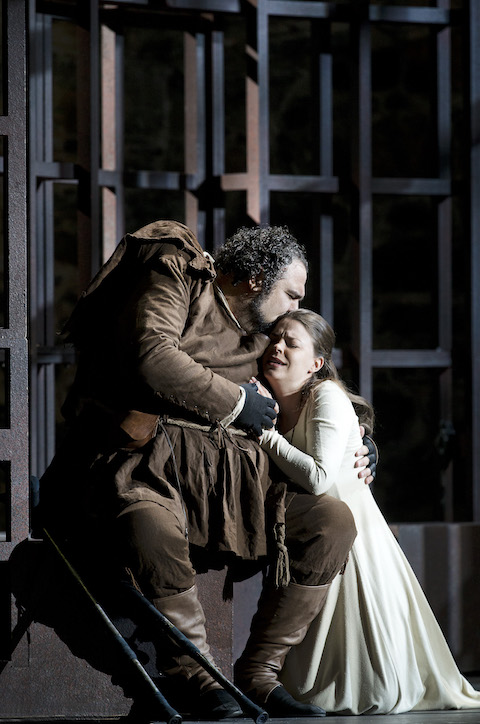 Manolov and Takala as father and daughter
In supporting roles, Mika Kares contributed cunning intelligence to the assassin Sparafucile’s character. He performed wickedly together with a devilish Katarina Giotas as the conniving Maddalena, the sister Sparafucile emphatically pimps out in McVicar’s direction. Juha Riihim‰ki as Borsa and Jussi Merikanto as Marullo both sang decently. Though similarly to Lahaj, they also had some issues with the choir and orchestra’s force in Verdi’s music.
A magical moment occurred, during the storm in Act III. As lightning flashed brightly over the stage, a cold draft flowed through Castle Olavinlinna. As it passed the nape of my neck, right before the orchestra burst into a roaring tempest, it raised the hair on my arms and covered my back in goosebumps. A palpable tension hung in the air. Such moments make the castle such a thrilling locations for the right production.
After Manolov bowed over his dying Gilda at the end, and acknowledged Monterone with: “The Curse!”, the audience exploded in cheers. Yes the Finnish talent of this production received the applause (and loud stamping) it deserved. McVicar’s production proved a perfect fit for the Castle Olavinlinna.
David Pinedo?