Neil Warmington’s simple designs, illuminated by the mauve glow of Ben
Ormerod’s lighting, emphasised the artifice and duality of Poulenc’s
quasi-comic strip capers. A proscenium within the Britten Theatre’s own
proscenium set the action at one remove; a door-opening at the rear led to
nowhere in particular. The snakes of Gauloises smoke wafting above the cafÈ
table, where two flaneurs supped Bordeaux, suggested a Parisian locale, but
the graffiti, Paris ou Zanizibar?, injected a note of doubt and
disconnection. Indeed, a disreputable duo, Lacouf and Presto – sung by
Thomas Erlank and Timothy Edlin, respectively, with vaudevillian charm –
have a fatal argument about their location, their deaths prompting a grand
chorale epitaph which here was majestically melodious and morose.

Apollinaire’s zany tale is designed to defy logic. A French housewife,
ThÈrËse, is bored of her duties as a woman and wife, and expresses her
defiance by relieving herself of the emblem of her oppression, her breasts,
which have turned into balloons and are swiftly punctured. She grows a
beard, transforms herself into a man and, empowered by her new masculinity,
sets out to conquer the world as ‘TirÈsias’. In bewilderment and outrage,
her husband, Le Mari, determines to effect his own sexual reversal, dons a
floral frock and fathoms out how to spawn his own brood – all 40,000 of
them … in a single day. He hits the headlines and the successful careers of
his offspring bring him a tidy fortune.

Things turn sour, though, when a Parisian reporter tries to swindle him and
a gendarme accuses his children of being the cause of famine among the
people of Zanzibar. The intervention of a Fortune Teller adds to the zany
mix: she foresees the death of the gendarme, then promptly fulfils her own
prophecy by strangling him. It’s TirÈsias in disguise, seeking
reconciliation with her Husband. The ‘happy’ conclusion prompts a chorus
for the people of Zanzibar calling upon the audience to go forth and
multiply. 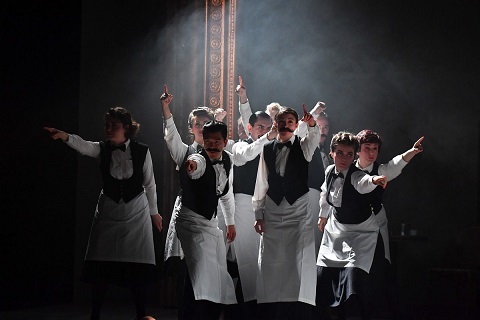 It must have been good propaganda for the post-war French government hoping
to extol the virtues of large families and convince the populace that it
was their patriotic obligation to increase the birth-rate. Indeed, the
three-part overture – a parody of the Baroque – began ‘outside the frame’,
with Kieran Rayner’s orotund Theatre Director stage reminding us of our
demographic duties in times of war.

The score is a good choice for a student ensemble for the piece does not
require voices of heroic stature but it does need an adaptable cast who can
capture the youthful exuberance and deceptive lightness of the drama. It
also needs a sterling ThÈrËse to initiate the absurdities and sustain the
(in)credibility of the ensuing preposterousness, and in Harriet Eyley, the
RCM were blessed with a fine singing actress who projected imposingly but
with a vocal warmth which assuaged some of ThÈrËse’s feisty
unreasonableness. The challenging coloratura was sung with penetrating
precision and a sparkle of panache. 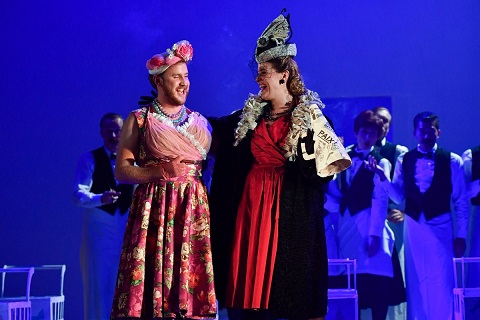 As Le Mari, New Zealander Julien Van Mellaerts displayed the characteristic
‘open, engaging tone’ and ‘muscularity and vitality’ that I’d enjoyed at
the

earlier this year. Van Mellarts delighted in the grotesqueries and
improbabilities, and the brightness and power of baritone enabled Le Mari
to hold his own against his wife’s feminist proselytising. His natural
flair for comedy was shared by those in the secondary, largely generic
roles, with James Atkinson perfecting the gendarme’s gesticulations and
Benedict Hymas capturing the reporter’s rapaciousness.

Michael Rosewell conducted a clean and accurate rendition of Poulenc’s
explosive score, which charmed in the lyrical episodes but needed a bit
more drive and rhythmic bite to convince in the brassy burlesque.

As director Stephen Unwin twirled his cast through the chaotic sequence of
scenes, some of the choreography was a little rough and ready, but the
gentle clumsiness had its own charm and this production captured Poulenc’s
delightful irreverence – the composer relished the response to the
premiere, reporting that “a part of the audience brings the house
down with enthusiasm but the Puccini fans in the gods are outraged”.

This was a colourful and exuberant performance, but some of the opÈra bouffe’s restlessness remained elusive. For,
beneath the frivolous inconsequentiality there’s a lingering spirit of
melancholy. Apollinaire had recreated a war-torn Montmartre, in which
desire and destitution balanced on a knife-edge; writing in the post-WW2
years, Poulenc too evokes the calamitous recent past beneath the comic
absurdities. The score’s historic allusions – to Offenbach, Ravel,
Chabrier, even to the original incidental music by Germaine Albert-Birot
which had accompanied Apollinaire’s play – somehow seem to deepen the
nostalgic despondence, despite their frothy musical articulation.

The ‘action’ of Chabrier’s one-act, three-hander, Une Èducation manquÈ, takes place on the wedding night of an
ingÈnue bride and her fresh-faced groom whose education unfortunately has
been defective – for his tutor-mentor, Pausanias, has taught him everything
from theology to trigonometry but has neglected the finer ‘arts’ of nuptial
etiquette. 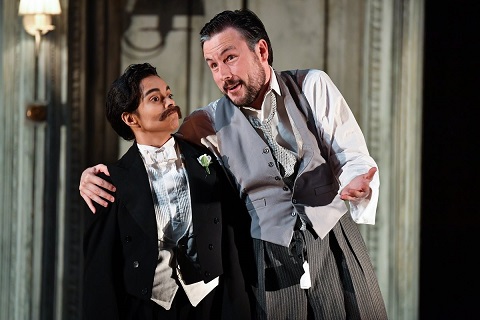 It’s a slight piece but not without a musical elegance which was matched by
Warmington’s simple chateaux-chic style, complete with a central
window-seat from which the frustrated groom could gaze at the moon and
reflect with mournful grace on the mysterious of marital engagement. There
wasn’t much of a frisson between Julieth Lozano’s Gontran de Boismassif and
his bride, HÈlËne de la Cerisaie, sung by Rosanna Cooper, which contributed
to the deadening deadlock of the drama, but Cooper’s mezzo bloomed richly
and Lozano exhibited vocal vivacity and a lively stage presence. Kieran
Rayner took the role of the hapless tutor and his tricky patter number with
his mentee was deftly delivered.

When a storm broke out, the artless newlyweds proved more threatened by the
thunderous crashes than thoughts of sexual initiation. As they sought
comfort in each other’s arms, one couldn’t help but have a twinge of
nostalgia for carefree days of adolescent love.