The production has made its way from

The words ‘Wien 1941’ come into focus on the back-drop, like the flickering
subtitles of an old movie. With gradual illumination, the set comes into
focus and time recedes – ‘Wien 1911’. We are in the Marschallin’s plain
white bedroom, but the low light hints at the shabbiness that the passing
of thirty years will bring. The drooping chandelier evokes the glistening
grey of a spider’s web.

The old duchess remains: a Dickensian ‘ghost of time yet to come’,
haunting the present with presentiments of the future. And, during
the lively teasing of the first scene as Octavian exults in his secret
tryst with his ‘Bichette’, it is the Marschallin’s sudden, fleeting
encounter with this disturbing alter ego who paces the rim of the room,
that brings the first note of sadness to the lovers’ indulgence of their
desire.

Later, during the Marschallin’s morning levÈe, the lingering presence of
the gracious old dame amid the helter-skelter raucousness of the milliner,
bird-catcher, lawyer, pleading orphans and hair-dressers adds pathos to the
riotousness which intrudes into the boudoir. When Rebecca Evans’
Marschallin inspects her coiffeuses’ efforts in a gold-rimmed hand mirror,
her alarm – ‘Why, today you’ve made me look like an old lady!’ – inspires
tenderness and pity.

The orphans’ hasty elocution lesson, and Baron Ochs’ haughty pique when the
lawyer disillusions him about the potential profitability of his marriage
contract, sugar the scene with a patina of humour. But, it is the stillness
of the Italian singer’s serenade – as elegantly shaped by Paul Charles
Clarke as the singer’s red velvet tail-coat – which confirms the underlying
sadness. When a waiter pulls out a chair for the Marschallin, for a moment
it seems that it is the old countess who will seat herself, usurping her
younger self. 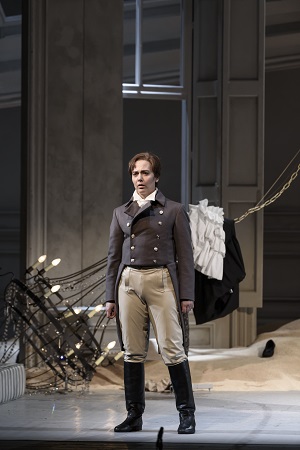 Sorrow pervades the final scene of the Act, almost painfully entwining with
the beauty of Strauss’s score. When Octavian laments that his beloved is
changed from the one he knew, the Marschallin is distracted by the ghost
that only she can see. We thus feel compassion for the petulant Quin-Quin
who kicks the bed in frustration and bewails, ‘Can I no longer kiss you
until you gasp for air?’, as the sands of time trickle from the ceiling in
two fragile golden streams. The Marschallin’s sudden realisation that she
has brusquely sent away her young lover without even giving him a kiss is
heart-breaking, but when the footmen are too late to call the young count
back and perpetuate the enchantment of present desire, she allows the spell
to break. The filter of sand has ceased. The illumination falls upon the
seated elderly figure: this is the reality that in the closing moments the
Marschallin tenderly accepts and embraces.

Fuchs’ sensitive crafting of the sentiment of this opening Act is utterly
convincing, and it is aided by the characterisation of the central lovers.
Lucia Cervoni’s Octavian is naÔve and impetuous but genuinely devoted; her
mezzo is wonderfully firm and clean, full of youthful freshness. Handsome
in a red-trimmed grey frock, Octavian bursts with an adolescent swagger –
collar turned up, sword stabbing the floor between his legs – which is
softened by Cervoni’s warm lyricism.

Evans is initially a more playful Marschallin than is sometimes the case,
and as they frisk spiritedly, and Octavian adopts his Mariandel disguise,
the scene seemed imbued with the light-hearted impishness of Cherubino and
the Countess in Act 2 of Figaro. But the fullness and rich layers
of Evans’ soprano hint at a burgeoning maturity, one which overtakes her
Marschallin when she least expects it. When she gives her Quin-Quin the
silver rose, Evans’ soprano is a gleaming, soft thread, as beautifully
scented as the rose itself. Telling of her night-time wandering around the
Feldmarschal’s chateau, to turn off the clocks, Evans soprano lowers, and
slows, with quiet melancholy and resignation. 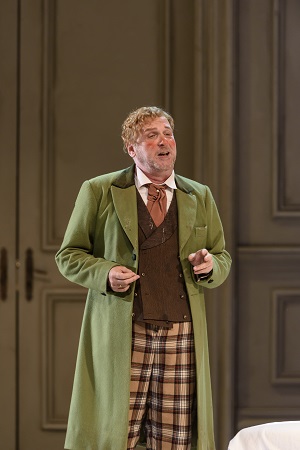 The arrival of Brindley Sherratt’s tartan-trousered Baron Ochs prevents
sentiment turning to sentimentality in this opening act. Heralded by hints
of pink and green light which fleck the bedroom walls – indicative of his
crudely rouged cheeks and lime-green coat – this Ochs is a bore, a boor and
a bear, lurching lecherously with a dirty grin, but Sherratt never turns
him into a clown. Ochs is full of beans, but though Sherratt’s bass does
not offer soft warmth to alleviate the overconfidence and brashness, the voice is immensely strong, his lines are finely crafted, the diction superb, and that this Ochs will so
obviously endure disappointments and humiliations ensures our indulgence of
his faults.

A row of gilded chairs guarded by mustard-liveried retainers transforms the
private bedroom to Faninel’s public reception room at the start of Act 2.
The grand entrance doors are replaced by fireplace from whose grate tumble
the unstoppable sands of time, piling ever higher. Louise Alder’s Sophie
can barely contain her excitement, almost hyperventilating with glee as she
prances and preens in anticipation of the pomp and honour to come.

Bespectacled and clutching a book to her breast, Alder’s Sophie put me in
mind of Cecily from Wilde’s The Importance of Being Earnest –
another impassioned ingÈnue, eager to cast aside her ‘horrid German
lessons’ for dalliance with the dashing ‘Ernest’. And her companion
Marianne Leitmetzerin, sung with vigour and colour by Angharad Morgan, was
a veritable Miss Prism, reprimanding her over-zealous charge but gushing
animatedly as she espied the rose-bearer’s arrival – dressed in silver from
top to toe – as if she were gleaning racy material for a three-volume
novel.

The presentation of the rose was exquisite: I don’t think I’ve ever heard
it better sung. Conductor Tom·ö Hanus seemed to set off a little fast at
first, leaving Cervoni behind, but in fact the flowing pace perfectly
suited the escalating emotional pitch. I struggle to find a word to
describe Alder’s glorious vocal ascents: they did not soar, float or climb,
rather her soprano seemed suddenly to inhabit a sublime peak as if it had
been there for eternity and we, in our mundanity, had simply not heard its
transcendent song. Alder can swell or retreat from the fullest glow to the
most delicate thread with stunning ease, and as so often in this production
it was the juxtaposition of dramatic exuberance with musical serenity that
spoke so powerfully. The conversation between the would-be bride and the
Rosenkavalier which follows was funny and earth-bound: these were real
people, stumbling for the ‘right’ words, bearing their hearts on their
sleeves. 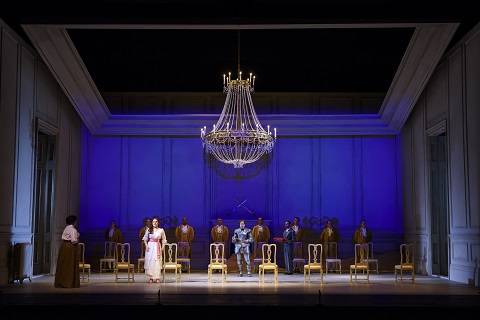 The scene was a perfect foil for Ochs’ ill-mannered arrival. The
loutishness of Lerchenau and his coarse retinue was perfectly judged, the
waltzes tinged with just the right touch of loucheness, Ochs’ puffed-up
pomposity balanced with pouting injured pride. Even Madeleine Shaw’s
lascivious Annina squirmed in his embrace, as she and Peter Van Hulle’s
vicious Valzacchi stirred up trouble.

But, at the close, believing that Mariandel was eagerly awaiting his answer
about a nocturnal assignation, the reinvigorated Ochs’ final reprise – with
him, no night can be too long – was superbly judged. The final phrase
lingered just long enough for us to feel pity for his delusion, so soon to
be deflated but, Sherratt suggested, never to be fully expunged. Sleazy
lecher he may be, but Sherratt made this Ochs utterly compelling. Adrian
Clarke’s Herr von Faninal was equally convincing, as lyrical in affection
for his daughter as he was in, first, bewilderment, then anger.

Fuchs and Turner swept us through the drama of the final act with an
equally sure hand. The damage wrought by the inexorable accumulation of
sand is used to convey the transfer from civilised chateau to unsavoury
tavern: the ceiling sags, all that remains of the walls are the towering
door frames – relics of former glory like Ozymandias’ ‘vast and trunkless
legs of stone’ and crumbling pedestal. The scenes of Ochs’
humiliation are crowded but well-choreographed, with Valzacchi and Annina
cavorting about with commedia-like charm. 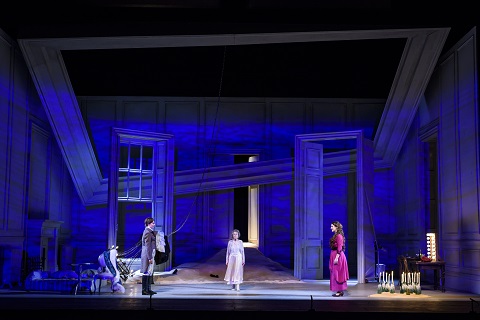 The final trio did not disappoint as Alder, Cervoni and Evans surged
through the phrases with strength and sublimity, accompanied – as
throughout – by the sensuous, sympathetic playing of the WNO Orchestra. The
Marschallin’s dignified retreat was balanced by the courtly return of her
future self; unseen by the young lovers, she watched their embraces and
listened to their exquisite pianissimo interweavings with genteel
acquiescence.

Fuchs’ final coup is masterly. It’s becoming common for directors to seek
an alternative to the convention that the opera’s capricious coda should
depict the mischievous re-appearance of the Marschallin’s page Mahomed, in
search of Sophie’s lost handkerchief. At the

, for example, Robert Carsen slid back the walls and revealed a haunting
vision of the bloody fields of WW1, a row of ghostly soldiers, headed by
the Feldmarschall, shrouded in ashen mist.

Fuchs offers us a more comforting acceptance. Mohammed, himself exhibiting
the grey progress of age, shuffled with the aid of a walking stick, but
with slow grace, towards the seated Marschallin, bearing a silver salver.
Her regality undimmed by time, she accepted the china tea cup with a
forgiving smile. A small gesture, but one which drew us all – poignantly,
consolingly – into the Marschallin’s recognition and reconciliation.